Heilongjiang (Simplified Chinese: 黑龙江省; Traditional Chinese: 黑龍江省; pinyin: Hēilóngjiāng; Postal map spelling: Heilungkiang; Manchu: Sahaliyan ula) is a province of the People's Republic of China located in the northeastern part of the country. "Heilongjiang" literally means Black Dragon River, which is the Chinese name for the Amur River. The one-character abbreviation is 黑 (pinyin: Hēi), and the Manchu name of the region is Sahaliyan ula (literally meaning "Black river"), from which the name of Sakhalin island is derived. Heilongjiang borders Jilin to the south and Inner Mongolia to the west, and it also borders Russia to the north, with the Amur River marking the territorial border between the two countries. Heilongjiang contains both China's northernmost point (in Mohe County along the Amur) and easternmost point (at the junction of the Amur and Ussuri Rivers). Heilongjiang's culture is part of a culture of Northeast China that is relatively homogeneous across all northeastern China.

Heilongjiang's location in the furthermost northeast corner of China has cast the region's role in China. Situated on the border of Russia, with the Sea of Japan near at hand, Heilongjiang has been the point of contact between the three nations. The abundant natural resources have made the district important for China's economy, especially energy with huge oil reserves. Politically, Heilongjiang's role as the first region to come under communist control after the Soviet Union invaded at the close of World War II put the area center stage in China's political culture.

In ancient times, Heilongjiang was far from any literate civilization and information was sparse. Chinese and other sources state that Heilongjiang was inhabited by many different groups of people, including the Xianbei, the Mohe, and the Khitan. The eastern portion of Heilongjiang was ruled by the kingdom of Bohai between the seventh century and tenth century, and the Jurchen Jin Dynasty (1115-1234) that subsequently ruled much of northern China arose within the borders of modern Heilongjiang.

However, in 1858 and 1860, the Qing government gave up all land beyond the Amur and Ussuri Rivers to Russia, cutting China off from the Sea of Japan and giving Heilongjiang its present northern borders. At the same time, Manchuria was opened to Han migration by the Qing government. As a result, by the early twentieth century, the Han Chinese had become the dominant ethnic group in the region. In 1932, present-day Heilongjiang became part of the Japanese puppet state of Manchukuo.

At the beginning of communist rule, Heilongjiang province included only the western portion of the present-day province, and had its capital at Qiqihar. The remaining area was considered part of the province of Songjiang, with its capital at Harbin. In 1954, these two provinces were merged into present-day Heilongjiang, and Harbin became the capital of the newly combined province. During the Cultural Revolution, Heilongjiang was also expanded to include Hulunbuir League and some other areas previously in Inner Mongolia, but most of these changes were reversed later on. 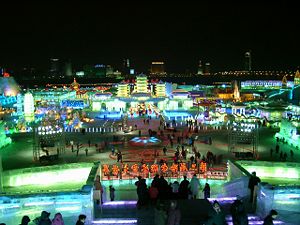 Heilongjiang is one of China’s water-rich provinces. The interior of the province, which is relatively flat and low in altitude, contains the Songhua River, the Nen River, and the Mudan River, all tributaries of the Amur, while the northern border forms part of the Amur valley. Xingkai Lake (or Khanka Lake) is found on the border with Russia's Primorsky Krai. The province's numerous rivers form five distinct water systems, and there are also about 6,000 lakes and reservoirs, covering a surface area of more than 800,000 hectares within the area. About 70 percent of Heilongjiang's rainfall concentrates in the warm season, providing an ideal environment for plants and crops to grow. This water system also provides rich, good quality water resources for agriculture, industry, and human consumption.

In addition to these water resources, the province also has a great deal of forest coverage, which provides many kinds of biological and rich mineral resources. Heilongjiang ranks first among all Chinese provinces in forested area, reserves of forest resources, and timber output. It contains the most important state-owned forest area and the largest timber center in China, and its forests also contain more than 100 species of trees, including 30 of high use-value. 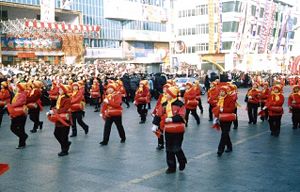 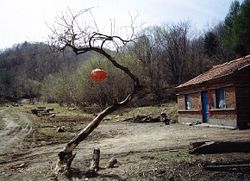 Heilongjiang is one of the country's most important commodity grain production bases, in terms of both total production and storage of grains. The agriculture of Heilongjiang, heavily defined by its cold climate, is based upon crops such as soybeans, maize, and wheat. The province's annual output and export of soybeans ranks first in the country, and its exports of soybeans make up two-thirds of the country's total. Other important commercial crops grown in the region include beets, flax, tobacco, potatoes, and sunflowers.

Heilongjiang's significant forested area serves as an important source of lumber for China. Pine, especially Korean pine and larch are the most important forms of lumber produced in the province. Forests are mostly found in the Daxingan Mountains and Xiaoxingan Mountains, which are also home to protected animal species such as the Siberian Tiger, the red-crowned crane, and the lynx.

Herding in Heilongjiang is centered upon horse and cattle. Heilongjiang has the greatest number of milk cows and the highest production of milk among all the province-level divisions of China.

Petroleum is of great importance in Heilongjiang, as it has the largest amount of oil resources in all of China. The Daqing oilfield is not only the largest in China, but it also serves as one of the few remaining large oil fields in the entire world. In addition to petroleum, several other important minerals are also found in Heilongjiang, including coal, gold, lead, and graphite. Heilongjiang also has great potential for wind power, with an average wind energy density of 200 watts per square metre. This combination of wind and petroleum resources makes Heilongjiang a strategic and important energy source for the People's Republic of China.

Heilongjiang is part of northeast China (Manchuria), the traditional base of industry for the People's Republic of China. Industry is focused upon coal, petroleum, lumber, machinery, and food, and although the economic output in Heilongjiang ranks first in the nation, 90 percent of the materials are exported to other parts of China. Due to its location, Heilongjiang is also an important gateway for trade with Russia. In recent years however, the province and the greater Manchuria area has suffered from stagnation. As a result, the government has started the Revitalize Northeast China campaign to deal with this problem, using privatization as the preferred method of economic reform.

The majority of Heilongjiang's population is Han Chinese, while other ethnic minorities include the Manchus, Koreans, Mongols, Hui, Daur, Xibe, Oroqin, Hezhen, and Russians. Overall, there are 49 different ethnic groups within Heilongjiang province.

At the end of 2000, Heilongjiang had 36 universities with 200,000 enrolled students and 16,000 teachers. In addition to this, the province had 3,023 middle schools with 2,708,000 students and 160,000 teachers, and 13,995 primary schools with 2,831,000 pupils and 193,000 teachers. The people in Heilongjiang have a relatively higher educational level than that of other regions with less illiteracy and semi-literacy. It is one of the provinces with a relatively high population quality in terms of education. Much of this can be attributed to the strong academic attendance rate among school-age children, which was 98.8 percent. 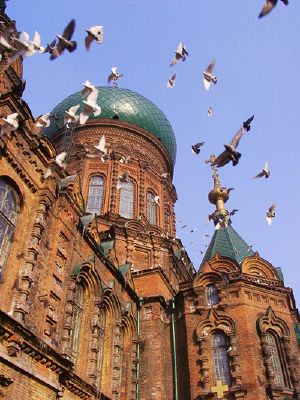 Heilongjiang has an abundant source of tourism resources. Harbin, the provincial capital, is a city of contrasts, with Chinese, Russian, and other eclectic worldwide influences clearly apparent. This influence is especially prominent in its architecture, with Eastern Orthodox, Roman Catholic, and Protestant churches dotting the city, providing an interesting cultural blend.

In addition to architecture, the long, cold winters felt by the province provide spots for ice and snow activities which are the best in all of China. The period for snow-skiing in the province lasts 120-140 days of the year, and the cold weather creates a unique backdrop for Harbin's} famed ice sculpture exhibitions. In 2007, the city put on its' 8th Ice and Snow World exhibition, which consisted of over 2,000 ice sculptures.[4] This event attracted numerous visitors to Harbin, providing a strong boost to the tourist industry of Heilongjiang. Heilongjiang Television and Harbin Economy Radio serve as broadcasters.

Heilongjiang's natural scenery includes the Wudalianchi Lakes, which are a series of five lakes formed between 1719 and 1721, by volcanic eruption. The volcanic activity shaped one section of a tributary of the Amur into five interconnected lakes, and the second lake in particular is renowned for its irregular geological sights. Jingbo Lake, found in Ning'an County, is a section of the Mudan river that has been narrowed and shaped by volcanic eruption into a series of sights, including the Diaoshuilou Falls. In general, the province's beautiful landscape, forests and grasslands, wetlands, rivers, and lakes provide rich resources for developing eco-tourism in the People's Republic of China.

Two major environmental problems have risen to the forefront within Heilongjiang. The first is the quality of the atmosphere, which has diminished due to the strong presence of industry in urban areas within the province. The air pollution in cities is characteristic of typical sooty pollution, with suspending particles being the main pollutants. Of the ten cities monitored, six have their yearly average volume of suspending contaminated particles exceeding the state standard for second-class air quality. During winter, when heating is provided in cities, the air quality becomes significantly worse than in other seasons.

Along with the problem of air pollution, another significant problem in the province has been the quality of drinking water. Due to the presence of chemical factories in Harbin and other places in Heilongjiang, organic pollutants have seriously contaminated various rivers. During the frozen season, the lack of oxygen in river waters is also a serious problem, and the biological need for oxygen in waterways near cities exceeds the normal standard.

Retrieved from https://www.newworldencyclopedia.org/p/index.php?title=Heilongjiang&oldid=1008247
Categories:
Hidden category:
This page was last edited on 12 December 2017, at 17:45.
Content is available under Creative Commons Attribution/Share-Alike License; additional terms may apply. See Terms of Use for details.