Beet is the common name for members of the flowering plant species Beta vulgaris. It is also the name for the fleshy, edible root of this plant that is valued as a vegetable. There are nine other species in the Beta genus and all also have the common name beet, although Beta vulgaris is the most well-known and commercially important and is known as the common beet (NRCS 2007).

Human creativity has resulted in various cultivars of Beta vulgaris. There are four main cultivar groups: the garden beet, whose root and leaves are eaten as a vegetable; the sugar-producing sugar beet; the mangel-wurzel, which is easily stored and used as feed for livestock; and Swiss chard, which is cultivated for its edible leaves. About thirty percent of the world's sugar production comes from sugar beets.

The Beta genus is a member of the flowering plant family Amaranthaceae or Chenopodiaceae. Although Chenopodiaceae is widely recognized in most plant classifications (notably the Cronquist system), the APG system (1998) and the APG II system (2003) have included plants in this group in the family Amaranthaceae on the basis of evidence from molecular phylogenies. Some classifications now treat this group as the Amaranthaceae subfamily Chenopodioideae, with the exception of a small number of genera now treated in the subfamilies Salicornioideae and Salsoloideae. Well-known chenopodioid species include beet, goosefoot, quinoa, and spinach. The main differences between Amaranthaceae and Chenopodiaceae are membraneous petals and stamens often united in a ring structure.

Plants in the Amaranthaceae family have leaves that are simple, opposite, or alternate, their margins entire or coarsely toothed, and without stipules. In most cases, there are neither basal or terminal aggregations of leaves. The flowers are solitary or aggregated in cymes, spikes, or panicles and typically perfect (bisexual) and actinomorphic. A few species have unisexual flowers. The bracteate flowers are regular with 4-5 petals, often joined. There are 1-5 stamens. The hypogynous ovary has 3-5 joined sepals.

Beta vulgaris is a herbaceous biennial or rarelyperennial plant with leafy stems growing to 1-2 meters tall. The leaves are heart-shaped, 5-20 centimeters long on wild plants (often much larger in cultivated plants). The flowers are produced in dense spikes, each flower very small, 3-5 millimeters diameter, green or tinged reddish, with five petals; they are wind-pollinated. The fruit is a cluster of hard nutlets.

The roots of beets (called "beetroots" in the British Isles) is commonly a garnet red, but may range in color from deep red to white, including one (Chioggia) with concentric rings of red and white (Herbst 2001).

Some subspecies recognized by various authorities are:

Beet remains have been excavated in the Third dynasty Saqqara pyramid at Thebes, Egypt, and four charred beet fruits were found in the Neolithic site of Aartswoud in the Netherlands. However, it is difficult to determine whether these are domesticated or wild forms of B. vulgaris.

However Zohary and Hopf (2000) note that beet is "linguistically well identified." They state the earliest known written mention of the beet comes from eighth century B.C.E. Mesopotamia; the Greek Peripatetic Theophrastus later describes the beet as similar to the radish. Zohary and Hopf (2000) noted that "Roman and Jewish literary sources indicate that already in the 1st century B.C.E., domestic beet was represented in the Mediterranean basin by leafy forms (chard) and very probably also by beetroot cultivars."

In 1747, German chemist Andreas Marggraf identified sucrose in beet root. This discovery remained a mere curiosity for some time, but eventually his student Franz Achard built a sugar beet processing factory at Cunern in Silesia, under the patronage of Frederick William III of Prussia (reigned 1797–1840). While never profitable, this plant operated from 1801 until it was destroyed during the Napoleonic Wars (c. 1802–1815).

Napoleon, cut off from Caribbean imports by a British blockade and at any rate not wanting to fund British merchants, banned sugar imports in 1813. This cut off supplies of sugar produced from sugar cane. The beet sugar industry that emerged in consequence thrived.. 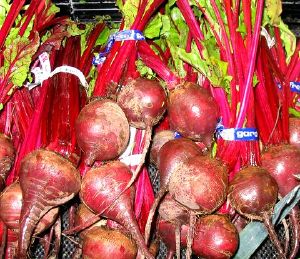 A selection of Beta vulgaris, known as beet, at a grocery store.

Numerous cultivars have been selected and bred for several different characteristics. For example, the "earthy" taste of some beet cultivars comes from the presence of the chemical compound geosmin. Researchers have not yet answered whether beets produce geosmin themselves, or whether it is produced by symbiotic soil microbes living in the plant (Lu et al. 2003). Nevertheless, breeding programs can produce cultivars with low geosmin levels yielding flavors more acceptable to shoppers (Nottingham 2004). Major cultivar groups include:

The fleshy root petioles, and [leaf|leaves]] of Beta vulgaris are eaten.

The most important form is the garden beet, but in many African countries spinach beet/Swiss chard is far more important (Oyen 2004). The roots of the garden beet may be cooked or canned as a vegetable, as can the leaves. They may also be used in soup. Garden beet juice is a popular health food. 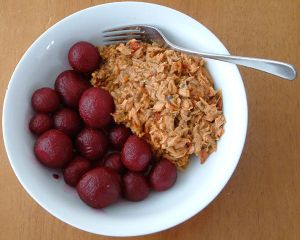 Beta vulagris roots contain significant amounts of vitamin C, while the leaves are an excellent source of vitamin A. They are also high in folate, soluble and insoluble dietary fiber and antioxidants. It is among the sweetest of vegetables, containing more sugar even than carrots or sweet corn. The content of sugar in garden beet is no more than 10 percent, in the sugar beet it is typically 15 to 20 percent.

Another nutrient in beets is betaine. Betaine (N,N,N-trimethylglycine) was named after its discovery in sugar beets in the nineteenth century. It is a small N-trimethylated amino acid, existing in zwitterionic form at neutral pH. This substance is often called ‘‘glycine betaine’’ to distinguish it from other betaines that are widely distributed in microorganisms, plants, and animals. This nutrient is valuable for the health of the cardiovascular system (UMMC 2002). Betaine supplements, manufactured as a byproduct of sugar beet processing, are prescribed to lower potentially toxic levels of homocysteine (Hcy), a naturally occurring amino acid that can be harmful to blood vessels thereby contributing to the development of heart disease, stroke, and peripheral vascular disease (UMMC 2002).

An average sized cup (225.8 grams) of sliced beets will contain:

Beets, like kale, spinach, carrots, and turnips, can be a source of nitrates and should not be fed to infants under 6 months of age.

The color of red beetroot is due to a purple pigment betacyanin and a yellow pigment betaxanthin, known collectively as betalins. (This is unlike red cabbage, which contains the pigment anthocyanin). Breeds of beetroot that are not the typical deep red, such as Burpee's golden and albina vereduna, have a greater or lesser distribution of the two betalin pigments (Hamilton 2005).

The pigments are contained in cell vacuoles. Beetroot cells are quite unstable and will "leak" when cut, heated, or when in contact with air or sunlight. This is why red beetroots leave a purple stain. Leaving the skin on when cooking, however, will maintain the integrity of the cells and therefore minimize leakage. Betacyanin in beetroot may cause red urine and feces in some people who are unable to break it down. This is called beeturia (Eastwood and Nyhlin 1995).

Betanin, or beetroot red, a type of betalin obtained from the roots, are used industrially as red food colorants (such as to improve the color of tomato paste, sauces, jams, sweets, etc.) (Oyen 2004).

Commercially-produced table sugar comes either from sugar beets or sugarcane (or sugar cane). The root of the sugar beet, Beta vulgaris, contains a high concentration of sucrose and is grown commercially for sugar.

Sugar beet provides approximately 30 percent of world sugar production. Beet sugar comes from regions with cooler climates: northwest and eastern Europe, northern Japan, plus some areas in the United States, including California. Europe and Ukraine are significant exporters of sugar from sugar beets.

The roots and leaves have medicinal uses (Grubben 2004).

The Romans used beetroot as a treatment for fevers and constipation, among other ailments. Apicius in De re coquinaria (3.2.1, 3, 4) gives five recipes for soups to be given as a laxative, three of which feature the root of beet. Hippocrates advocated the use of beet leaves as binding for wounds.

Since Roman times, beetroot juice has been considered an aphrodisiac. It is a rich source of the mineral boron, which plays an important role in the production of human sex hormones.

From the Middle Ages, beetroot was used as a treatment for a variety of conditions, especially illnesses relating to digestion and the blood. Platina recommended taking beetroot with garlic to nullify the effects of 'garlic-breath' (Platina about 1475).

Today the beetroot is still championed as a universal panacea. One of the most controversial examples is the official position of the South African Health Minister on the treatment of AIDS. Dr Manto Tshabalala-Msimang, Health Minister under Thabo Mbeki, had been nicknamed "Dr Beetroot" for promoting beets and other vegetables over antiretroviral AIDS medicines, which she considers toxic (Blandy 2006).

Beets, with large leaves, are also grown as ornamental plants. Ecologically, they provide food for many animals, including the larvae of a number of Lepidoptera species.