Quinoa (pronounced /ˈkinwɑ/ KEEN-wah or /ˈkinoʊə/ KEE-no-uh, Spanish quinua) is a tall South American herb, Chenopodium quinoa in the goosefoot genus (Chenopodium), native to the high altitude of the Andes, and characterized by small green clustered flowers and small fruits with a single seed. The name also is used for the edible, high-protein seeds and dried fruits, which have served as a stable food for many people in South America since pre-Colombian times. Quinoa is a pseudocereal rather than a true cereal as it is not a member of the grass family (Poaceae).

Quinoa has been a popular food for people of the higher Andes since at least the time of Incas, who called it the "mother grain" or "mother of all grains," and for whom it was treated as sacred. Today, it is ground into flour, boiled like rice, used in soup, and in many preparations suitable for rice. It also is used for livestock feed and made into an alcoholic beverage. Furthermore, its leaves are also eaten as a leaf vegetable, much like amaranth, although the commercial availability of quinoa greens is currently limited.

With its high-protein content, including all of the essential amino acids, quinoa has been hailed as a "supergrain of the future." It also is higher in unsaturated fats than most grains and lower in carbohydrates, and provides a balanced source of many nutrients, including a rich source of iron and vitamin B1. However, a coating of bitter-tasting saponins make it unpalatable without processing; these saponins serve the plant by protecting it against birds and other animals. Efforts to grow a plant without this saponin protection resulted in excessive consumption of the seeds by birds. 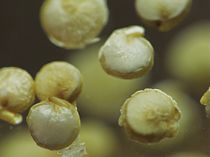 A few quinoa grains close up.

Quinoa (Chenopodium quinoa) originated in the Andean region of South America, where it has been an important food for 6,000 years. The herb can attain a height of 1.5 meters (5 feet), and has small green flowers in clusters. Single seeds are contained in each of the small fruits. The flowers have both male and female organs (hermaphroditic flowers) and are wind pollinated.

The plant's name is the Spanish spelling of the Quechua name, kinwa. It is known as "quinoa" in English and is pronounced with the stress on either the first syllable (/'kiːn.wɑː/) or the second (/kɪ.'nəʊ.ə/). In Spanish, the spelling and pronunciation vary by region. The accent may be on the first syllable and is usually spelled quinua (/'ki.nwa/), with quínoa (/'ki.no.a/) being a variant, or on the second syllable quinoa (/ki.'no.a/). There are multiple other native names in South America:

The Incas, who held the crop to be sacred, referred to quinoa as "chisaya mama" or "mother of all grains," and it was the Inca emperor who would traditionally sow the first seeds of the season using "golden implements." During the European conquest of South America quinoa was scorned by the Spanish colonists as "food for Indians," and even actively suppressed, due to its status within indigenous non-Christian ceremonies.

Chenopodium quinoa is most familiar as a fully domesticated plant, but it was believed to have been domesticated in the Andes from wild populations of C. quinoa (as well as a related species from Mexico, Chenopodium nuttalliae) (Pickersgill 2007). There are non-cultivated quinoa plants (Chenopodium quinoa var. melanospermum) that grow in the same area where it is cultivated; those are probably related to quinoa's wild predecessors, but could instead be descendants of cultivated plants (Heiser and Nelson 1974).

Quinoa is generally undemanding and altitude-hardy, so it can be easily cultivated in the Andes up to about 4,000 meters. Even so, it grows best in well-drained soils and requires a relatively long growing season. In eastern North America, it is susceptible to a leaf miner that may reduce crop success; this leaf miner also affects the common weed and close relative Chenopodium album, but C. album is much more resistant.

Similar Chenopodium species, such as pitseed goosefoot (Chenopodium berlandieri) and fat hen (Chenopodium album), were grown and domesticated in North America as part of the Eastern Agricultural Complex before maize agriculture became popular. Fat hen, which has a widespread distribution in the Northern Hemisphere, produces edible seeds and greens much like quinoa but in lower quantities. When grown in heavily fertilized fields, it can accumulate dangerously high concentrations of nitrates.

Quinoa was of great nutritional importance in pre-Columbian Andean civilizations, being secondary only to the potato, and was followed in importance by maize.

In contemporary times, this crop has become highly appreciated for its nutritional value, as its protein content is very high (12 to 18 percent), making it a healthful choice for vegetarians and vegans. Unlike wheat or rice (which are low in lysine), quinoa contains a balanced set of essential amino acids for humans, making it an unusually complete protein source (Schlick and Bubenheim 1993). It is a good source of dietary fiber and phosphorus and is high in magnesium and iron. It is a rich source of iron and vitamin B1 and a source of calcium, vitamin B2 (Bender and Bender 2005). It is lower in carbohydrates and higher in unsaturated fats than most grains (Herbst 2001). Quinoa is gluten-free and considered easy to digest.

Because of all these characteristics, quinoa is considered a possible crop in NASA's Controlled Ecological Life Support System for long-duration manned spaceflights (Schlick and Bubenheim 1993).

Quinoa may be germinated in its raw form to boost its nutritional value. Germination activates its natural enzymes and multiplies its vitamin content. In fact, quinoa has a notably short germination period: Only two to four hours resting in a glass of clean water is enough to make it sprout and release gases, as opposed to, for example, 12 hours overnight with wheat. This process, besides its nutritional enhancements, softens the grains, making them suitable to be added to salads and other cold foods.

Quinoa remains an important food in South American cuisine and can cook like rice, taking half of the time of regular rice to cook and expanding to four times its original volume (Herbst 2001). Quinoa has a light, fluffy texture when cooked, and its mild, slightly nutty flavor makes it an alternative to white rice or couscous. Being lighter than rice, it can be used in any way suitable for rice, including as part of a main dish, a side dish, in salads, in puddings, and in soups (Herbst 2001). 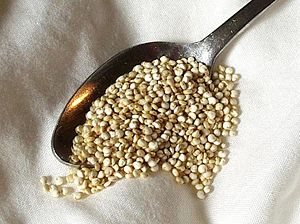 A spoonful of milled quinoa

The first step in preparing quinoa is to remove the saponins, a process that requires soaking the grain in water for a few hours, then changing the water and resoaking, or rinsing it in ample running water either in a fine strainer or in cheesecloth. Most boxed quinoa has been pre-rinsed for convenience.

A common cooking method is to treat quinoa much like rice, bringing two cups of water to a boil with one cup of grain, covering at a low simmer and cooking for 14–18 minutes or until the germ separates from the seed. The cooked germ looks like a tiny curl and should have a slight bite to it (like al dente pasta). As an alternative, one can use a rice cooker to prepare quinoa, treating it just like white rice (for both cooking cycle and water amounts). 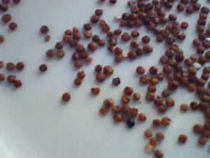 Vegetables and seasonings can also be added to make a wide range of dishes. Chicken or vegetable stock can be substituted for water during cooking, adding flavor. It is also suited to vegetable pilafs, complementing bitter greens like kale.

Quinoa can serve as a high-protein breakfast food mixed with honey, almonds, or berries; it is also sold as a dry product, much like corn flakes.

Quinoa flour can be used in wheat-based and gluten-free baking. For the latter, it can be combined with sorghum flour, tapioca, and potato starch to create a nutritious gluten-free baking mix. A suggested mix is three parts quinoa flour, three parts sorghum flour, two parts potato starch, and one part tapioca starch. Quinoa flour can be used as a filling for chocolate.

The seeds also are used as poultry feed and in making an alcoholic beverage known as chicha, and are used medicinally. In addition, the leaves are used as a leaf vegetable, sometimes substituting for spinach. Although technically not a grain, the seeds are prepared as are grains.

Quinoa is considered by many Jews to be kosher for Passover, if properly processed (OU; Rosen).

Quinoa in its natural state has a coating of bitter-tasting saponins, making it unpalatable. Most quinoa sold commercially in North America has been processed to remove this coating. Some have speculated this bitter coating may have caused the Europeans who first encountered quinoa to reject it as a food source, since they adopted other indigenous food plants of the Americas like maize and potatoes.

The bitterness of the saponins has beneficial effects during cultivation as the plant is unpopular with birds and thus requires minimal protection. There have been attempts to lower the saponin content of quinoa through selective breeding to produce sweeter, more palatable varieties. When new varieties were introduced by agronomists to native growers in the high plateau, however, the native growers rejected the new varieties despite their "magnificent" yields. Because the seeds no longer had a bitter coating, birds had consumed the entire crop after just one season.

The saponins in quinoa can be mildly toxic, as can be the oxalic acid in the leaves of all the chenopodium family. The risks associated with quinoa are minimal, provided it is properly prepared and leaves are not eaten to excess.