Buckwheat is the common name for plants in two genera of the dicot family Polygonaceae: The Eurasian genus, Fagopyrum, and the North American genus, Eriogonum. In particular, the name is associated with the common buckwheat (Fagopyrum esculentum or F. sagittatum), which is an important crop plant. Tartary buckwheat (F. tataricum) or "bitter buckwheat" also is used as a crop, but it is much less common. Members of Eriogonum are collectively known as "wild buckwheat." The name wild buckwheat is also used for a species in another genus in Polygonaceae, the agricultural weed Fallopia convolvulus.

Despite the common name and the grain-like use of the crop, buckwheats are not grasses (and are therefore considered pseudocereals) and are not related to wheat nor other monocots.

The seeds and flowers of buckwheat, so important for the reproduction of the plants, also provide larger ecological and commercial functions. The starchy seeds of buckwheat are processed to give a popular flour, used in a variety of foods, such as noodles and pancakes, and the buckwheat flowers provide a nectar source for honeybees, which in turn yield a dark colored honey. Other values for the plants include using the hulls as filling for various upholstered products, such as pillows, and using the plants as feed for animals and for erosion control. 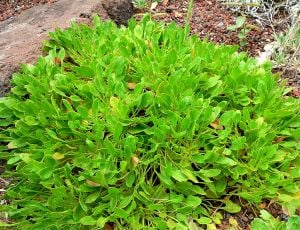 Buckwheat belongs to the the Polygonaceae family, a taxon of flowering plants also known as the "knotweed family" or "smartweed family." In addition to buckwheat, known members include sorrel (Rumex) rhubarb (Rheum) and knotgrass (Polygonum). The family is named for the many swollen node joints that some species have: Poly means "many" and goni means "knee" or "joint" (though some interpret goni to mean "seed," and the name then would refer to the many seeds these plants often produce). The family contains more than 43 genera and 1000 species, with the most diverse genus being Eriogonum, with 250 species. 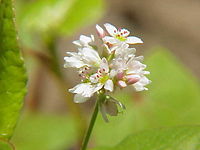 Members of the Polygonaceae family are characterized by leaves that are simple, arranged alternately on the stems, and have a peculiar pair of sheathing stipules known as ocreae. Those species that do not have the nodal ocrea can be identified by having involucrate flower heads. The calyx is petaloid, often in two rows. The flowers are normally bisexual, small in size, actinomorphic with calyxs of 3 or 6 imbricate sepels. After flowering, the sepals often become membranous and enlarge around the developing fruit. Flowers lack a corolla and the sepals are petal-like and colorful. The androecium is composed of 3 to 8 stamens that are normally free or united at the base. Flowers with compound pistils composed of three united carpels with one locule—producing a single ovule. The ovary is superior with basal placentation, and 2 to 4 stigmas are produced (Jones and Luchsinger 1979).

The genus Fagopyrum contains 15 to 16 species of plants, including two important crop plants, the common buckwheat or or Japanese buckwheat (Fagopyrum esculentum) and the Tartary buckwheat (Fagopyrum tataricum). They have similar uses, and are classed as pseudocereals in that they are used in the same way as cereals but do not belong to the grass family. Within Fagopyrum, the cultivated species F. esculentum and F. tataricum are in the cymosum group, with F. cymosum (perennial buckwheat), F. giganteum, and F. homotropicum (Sharma 2002). The wild ancestor of common buckwheat is considered to be F. esculentum ssp.ancestrale. F. homotropicum is interfertile with F. esculentum and the wild forms have a common distribution, in Yunnan. The wild ancestor of tartary buckwheat is considered to be F. tataricum ssp. potanini (Ohnishi and Matsuoka 1996) The name "buckwheat," or "beech wheat," comes from the triangular seeds, which resemble the much larger seeds of the beech nut from the beech tree, and the fact that it is used like wheat.

Common buckwheat likely was domesticated and first cultivated in southeast Asia, possibly around 6000 B.C.E., and from there spread to Europe and to Central Asia and Tibet. Domestication most likely took place in the western Yunnan region of China (Ohnishi 1998). Buckwheat is documented in Europe in the Balkans by at least the Middle Neolithic (c. 4000 B.C.E.). The oldest known remains in China so far date to circa 2600 B.C.E., and buckwheat pollen has been found in Japan from as early as 4000 B.C.E.

Buckwheat is the world's highest elevation domesticate, being cultivated in Yunnan on the edge of the Tibetan Plateau or on the Plateau itself. Buckwheat was one of the earliest crops introduced by Europeans to North America. Dispersal around the globe was complete by 2006, when a variety developed in Canada was widely planted in China.

Buckwheat is a short season crop that does well on low-fertility or acidic soils, but the soil must be well drained. Too much fertilizer, especially nitrogen, will reduce yields. In hot climates, it can only be grown by sowing late in the season, so that it will bloom in cooler weather. The presence of pollinators greatly increases the yield.

Common buckwheat is by far the most important buckwheat species economically, accounting for over ninety percent of the world's buckwheat production. A century ago, Russia was the world leader in buckwheat production (Pokhlyobkin 2001). Growing areas in the Russian empire were estimated at 6.5 million acres (26,000 km²), followed by those of France (0.9 million acres; 3,500 km²). (Taylor and Belton 2002). In 1970, the Soviet Union grew an estimated 4.5 million acres (18,000 km²) of buckwheat. Today, China is the world's top producer. Japan, Poland, Canada, Brazil, South Africa, and Australia also grow significant quantities of buckwheat.

In the northeastern United States, buckwheat was a common crop in the eighteenth and nineteenth centuries. Cultivation declined sharply in the twentieth century, due the use of nitrogen fertilizer, to which maize (corn) and wheat respond strongly. Over a million acres (4,000 km²) were harvested in the United States in 1918. By 1954, that had declined to 150,000 acres (600 km²), and by 1964, the last year that production statistics were gathered, only 50,000 acres (200 km²) were grown.

Use of common buckwheat 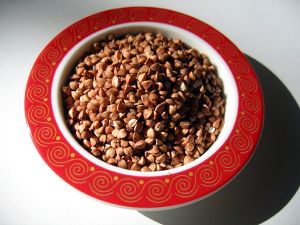 One of the most common uses of the common buckwheat is to process the starchy buckwheat seed into a popular flour. The buckwheat fruit is an achene, similar to sunflower seed, with a single seed inside a hard outer hull. The starchy endosperm is white and makes up most or all of buckwheat flour. The seed coat is green or tan, which darkens buckwheat flour. The hull is dark brown or black, and some may be included in buckwheat flour as dark specks. The dark flour is known (exaggeratedly) as "blé noir" ("black wheat") in French, along with the name sarrasin ("saracen").

Buckwheat greens also can be eaten or the buckwheat seeds processed into a meal. The nectar from buckwheat flower also makes a dark colored, strong monofloral honey. Buckwheat also is used for feed for animals and is sometimes used as a green manure, as a plant for erosion control, or as wildlife cover and feed.

Buckwheat hulls are used as filling for a variety of upholstered goods, including pillows and zafu. The hulls are durable and do not conduct or reflect heat as much as synthetic fills. They are sometimes marketed as an alternative natural fill to feathers for those with allergies. In this respect, medical studies have been done to measure the health effects of buckwheat hull pillows (Hong et al. 1987; Nam et al. 2004).

Chemicals in buckwheat have medicinal values and thus buckwheat is the source of ongoing research regarding its possible health benefits. 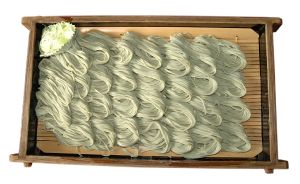 Soba noodles, made from buckwheat flour. 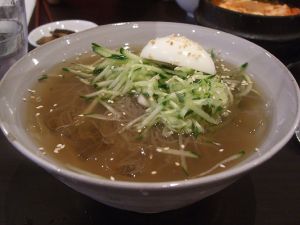 Buckwheat noodles play a major role in the cuisines of Japan (soba), Korea (naengmyeon, makguksu, and memil guksu) and the Valtellina region of Northern Italy (pizzoccheri). Soba noodles are the subject of deep cultural importance in Japan. In Korea, before wheat flour replaced buckwheat for making guksu, the generic term referring to noodles, buckwheat noodles were widely eaten as hot dishes. The difficulty of making noodles from flour that has no gluten has resulted in a traditional art developed around their hand manufacture.

Buckwheat groats are commonly used in western Asia and eastern Europe. The porridge was common, and is often considered the definitive peasant dish. It is made from roasted groats that are cooked with broth to a texture similar to rice or bulgur. The dish was brought to America by Russian and Polish Jewish immigrants who called it "kasha" and used it mixed with pasta or as a filling for knishes and blins, and hence buckwheat groats are most commonly called kasha in America. Groats were the most widely used form of buckwheat worldwide during the twentieth century, with consumption primarily in Russia, Ukraine, and Poland.

Buckwheat pancakes, sometimes raised with yeast, are eaten in several countries. They are known as buckwheat blinis in Russia, galettes in France (where they are especially associated with Brittany), ployes in Acadia, and boûketes (that is, named the same as the plant they are made of) in Wallonia. Similar pancakes were a common food in American pioneer days. They are light and foamy. The buckwheat flour gives them an earthy, mildly mushroom-like taste. In Ukraine, yeast rolls called hrechanyky are made from buckwheat.

Farina made from groats are used for breakfast food, porridge, and thickening materials in soups, gravies, and dressings. In Korea, buckwheat starch is used to make a jelly called memilmuk. It is also used with wheat, maize, or rice in bread and pasta products.

Buckwheat contains no gluten, and can thus be eaten by people with coeliac disease or gluten allergies. Many bread-like preparations have been developed.

Buckwheat greens can be eaten. However, if consumed in sufficient quantities, the greens, or, more commonly, their juice, can induce sensitization of the skin to sunlight known as fagopyrism (Arbour 2004). Fair skinned people are particularly susceptible, as are light pigmented livestock. Enthusiasts of sprouting, however, eat the very young buckwheat sprouts (four to five days of growth) for their subtle, nutty flavor and high nutritional value. They are widely available in Japan.

In recent years, buckwheat has been used as a substitute for other grain in gluten free beer. Buckwheat is used in the same way as barley to produce a malt that can form the basis of a mash that will brew a beer without gliadin or hordein (together gluten) and therefore can be suitable for coeliacs or others sensitive to certain glycoproteins.

Buckwheat contains D-chiro-inositol, a component of the secondary messenger pathway for insulin signal transduction found to be deficient in Type II diabetes and Polycystic Ovary Syndrome (PCOS). It is being studied for use in treating Type II diabetes (Kawa et al. 1996). Research on D-chiro-inositol and PCOS has shown promising results (Nestler et al. 1999; Iuorno et al. 2002).

A buckwheat protein has been found to bind cholesterol tightly. It is being studied for reducing plasma cholesterol in people with an excess of this compound (Tomotake et al. 2001).