Tryptophan is an α-amino acid that is found in most proteins and has an indole functional group as a distinguishing structural characteristic. It is a precursor to the neurotransmitter serotonin and the vitamin niacin (also known as nicotinic acid or vitamin B3).

In humans, the L-isomer of tryptophan, which is the only form that is involved in protein synthesis, is one of the 20 standard amino acids common in animal proteins and required for normal functioning in humans. Tryptophan is also classified as an "essential amino acid" since it cannot be synthesized by the human body from other compounds through chemical reactions and thus has to be taken in with the diet. Tryptophan, tyrosine, and phenylalanine are the biggest of the standard amino acids.

In general, essential amino acids require that human beings exercise personal responsibility and self-discipline in their diets and relate with a variety of other plants and animals for their nutritional needs.

Nutritional supplements of L-tryptohan were taken off the market in the United States at one point due to some being linked to the disability disease eosinophilia-myalgia syndrome (EMS). This disease largely was attributed to contaminates traced to one manufacturer, who, to save production costs, took some liberties in the manufacturing process.

Tryptophan's three letter code is Trp, its one letter code is W, its codon is UGG, and its systematic name is 2-Amino-3-(lH-indol-3-yl)-propanoic acid (IUPAC-IUB 1983). Tryptophan is one of only two of the standard amino acids encoded by a single codon, with methionine being the other one.

In biochemistry, the term amino acid is frequently used to refer specifically to alpha amino acids: those amino acids in which the amino and carboxylate groups are attached to the same carbon, the so-called α–carbon (alpha carbon). The general structure of these alpha amino acids is:

where R represents a side chain specific to each amino acid.

Most amino acids occur in two possible optical isomers, called D and L. The L amino acids represent the vast majority of amino acids found in proteins. They are called proteinogenic amino acids. As the name "proteinogenic" (literally, protein building) suggests, these amino acid are encoded by the standard genetic code and participate in the process of protein synthesis. In tryptophan, only the L-stereoisomer is involved in synthesis of mammalian proteins. However, the D-stereoisomer is occasionally found in natural materials, such as the marine venom peptide contryphan (Pallaghy et al. 1999).

Tryptophan behaves similarly to phenylalanine and tyrosine. Like these two amino acids, tyrptophan contains a large rigid aromatic group on the side chain. Tyrptophan, tyrosine, and phenylalanine—like isoleucine, leucine, and valine—are hydrophobic and tend to orient towards the interior of the folded protein molecule.

As an essential amino acid, tryptophan is not synthesized in humans, hence it must be ingested, usually as a component of proteins. Fortunately, it is found in most proteins, albeit in small amounts.

The principle function of amino acids, including tryptophan, are as building blocks in protein biosynthesis.

In addition, tryptophan functions as a biochemical precursor for the production of the neurotransmitter serotonin (via tryptophan hydroxylase) and the vitamin niacin (with kynurenine as an intermediate). Serotinin, in turn, can be converted to melatonin (a neurohormone), via 5-hydroxyindole-O-methyltransferase.

Conversion of tryptophan to niacin is insufficient to meet the demands for this vitamin. Lack of tryptophan, however, such as dependence on food of low tryptophan content such as maize, can contribute to the niacin-deficiency disease pellagra.

In organisms which synthesize tryptophan (plants and microorganisms), high levels of this amino acid activate a repressor protein, which in turn binds to the trp operon. Binding of this repressor to its operon prevents transcription of downstream DNA that codes for enzymes involved in the biosynthesis of tryptophan. Hence, high levels of tryptophan prevent additional tryptophan synthesis through a negative feedback loop. Conversely, if the cell's tryptophan level drops, transcription of the operon's genes resumes. This is one example of how gene expression responds rapidly to changes in the cell's internal and external environment. 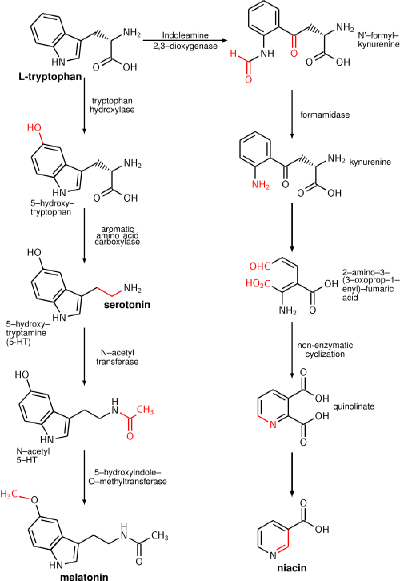 Metabolism of L-tryptophan into serotonin and melatonin (left) and niacin (right). Transformed functional groups after each chemical reaction are highlighted in red.

Use as a dietary supplement

For some time, tryptophan was available in health food stores as a dietary supplement. It was largely taken out of the market in 1991 due to health concerns (discussed below), but since 2002, L-Tryptophan has been sold again in its original form.

Many people found tryptophan to be a safe and reasonably effective sleep aid, probably due to its ability to increase brain levels of serotonin (a calming neurotransmitter when present in moderate levels) and/or melatonin (a sleep-inducing hormone secreted by the pineal gland in response to darkness or low light levels) (Wurtman et al. 1968).

Clinical research tended to confirm tryptophan's effectiveness as a natural sleep aid and for a growing variety of other conditions typically associated with low serotonin levels or activity in the brain. In particular, tryptophan showed considerable promise as an antidepressant alone, and as an "augmenter" of antidepressant drugs. Other promising indications included relief of chronic pain and reduction of impulsive, violent, manic, addictive, anxiety-related, obsessive, and compulsive behaviors and disorders.

In 1989, a large outbreak of a new, disabling, and in some cases deadly autoimmune illness called eosinophilia-myalgia syndrome (EMS) was traced to one source of L-tryptophan. The bacterial culture used to synthesize tryptophan by a major Japanese manufacturer, Showa Denko KK, had been genetically modified several times to increase tryptophan production during the 1980s (Smith 2003). Along with the higher tryptophan concentrations in the modified culture media, the purification process had also been streamlined to reduce costs, and a purification step that used charcoal absorption to remove some impurities had been omitted (Mayeno and Gleich 1994). The manufacturer maintained that this process modification allowed another bacterial metabolite through the purification, resulting in the presence of an end-product contaminant responsible for the toxic effects. The U.S. Food and Drug Administration was unable to publicly establish with certainty what contaminant was the cause of the outbreak.

Most tryptophan was banned from sale in the United States in 1991, and other countries followed suit. Tryptophan from one manufacturer, of six, continued to be sold for manufacture of baby formulas. Beisler (2000) commented that “Political pressures have played a role in the FDA’s decision to ban L-tryptophan as well as its desire to increase its regulatory power over dietary supplements.”

At the time of the ban, the FDA did not know, or did not indicate, that EMS was caused by a contaminated batch (Raphals 2000). In February 2001, the FDA loosened the restrictions on marketing (though not on importation), but still expressed the following concern:

"Based on the scientific evidence that is available at the present time, we cannot determine with certainty that the occurrence of EMS in susceptible persons consuming L-tryptophan supplements derives from the content of L-tryptophan, an impurity contained in the L-tryptophan, or a combination of the two in association with other, as yet unknown, external factors"(FDA 2001).

A metabolite of tryptophan, 5-Hydroxytryptophan (5-HTP), has been suggested as a treatment for epilepsy (Kostowski et al. 1978) and depression though clinical trials are inconclusive and lacking (Turner et al. 2006). 5-HTP readily crosses the blood brain barrier and in addition is rapidly decarboxylated to serotonin (5-hydroxytryptamine or 5-HT) (Hardebo and Owman 1980) and therefore may useful for the treatment of depression. However serotonin has a relatively short half life since it is rapidly metabolized by monoamine oxidase; therefore, it is likely to have limited efficacy. It is marketed in Europe for depression and other indications under brand names like Cincofarm and Tript-OH. In the United States, 5-HTP does not require a prescription as it is covered under the Dietary Supplement Act.

Tryptophan has continued to be used in clinical and experimental studies employing human patients and subjects. Several of these studies suggest tryptophan can effectively treat the fall/winter depression variant of seasonal affective disorder (Jepson et al. 1999).

According to popular belief, eating tryptophan in turkey meat causes drowsiness. Turkey does contain tryptophan, which does have a documented sleep-inducing effect as it is readily converted by the body into serotonin and/or melatonin, which have a sedative effect as noted above. However, ingestion of turkey alone has not been proven to have this effect. Furthermore, chicken and ground beef are considered to have similar levels as turkey (McCue 2001). Some attribute the sleepiness to overeating of carbohydrates and alcohol consumption during feasts.

An additional hypothetical mechanism is as follows. A large quantity of any food, such as a Thanksgiving feast, introduces large quantities of both carbohydrates and branched-chain amino acids releasing insulin. Insulin stimulates the uptake of large neutral branched-chain amino acids (and not tryptophan) by muscle cells through the myocyte membranes. The result is an increase in the ratio of tryptophan to large neutral amino acids in the blood. This reduces competition with other amino acids for the Large Neutral Amino Acid Transporter protein for uptake of tryptophan across the blood-brain barrier into the central nervous system. Once inside the central nervous system, tryptophan is converted into serotonin by the raphe nuclei, and serotonin is further metabolized into melatonin by the pineal gland. Alcoholic beverage consumption at holiday feasts is likely to compound the effect.