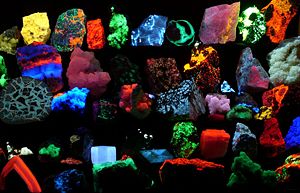 Fluorescence is a luminescence that is mostly found as an optical phenomenon in cold bodies, in which the molecular absorption of a photon at a certain wavelength triggers the emission of another photon with a longer wavelength. The substance that fluoresces is called a fluorophore. The energy difference between the absorbed and emitted photons ends up as molecular vibrations or heat. Usually the absorbed photon is in the ultraviolet range and the emitted light is in the visible range, but this depends on the fluorophore used and other factors.

Fluorescence is named after the mineral fluorite, composed of calcium fluoride, which often exhibits this phenomenon. A variety of other minerals and organic materials also fluoresce, and they are used for a number of different applications. For example, fluorescence is useful for lighting and tagging molecules in analytical chemistry and biochemistry. Fluorophores have been used to label cells, antibodies, and other biological structures, and to determine their structures and modes of action.

Gemstones, minerals, fibers, and many other materials which that be encountered in forensics or with a relationship to various collectibles may have a distinctive fluorescence or may fluoresce differently under short-wave ultraviolet, long-wave ultraviolet, or X-rays.

Crude oil (petroleum) fluoresces in a range of colors, from dull brown for heavy oils and tars through to bright yellowish and bluish white for very light oils and condensates. This phenomenon is used in oil exploration drilling to identify very small amounts of oil in drill cuttings and core sample.

Organic liquids such as mixtures of anthracene in benzene or toluene, or stilbene in the same solvents, fluoresce with ultraviolet or gamma ray irradiation. The decay times of this fluorescence is of the order of nanoseconds since the duration of the light depends on the lifetime of the excited states of the fluorescent material, in this case anthracene or stilbene.

There are many natural and synthetic compounds that exhibit fluorescence, and they have a number of applications. Some deep-sea animals, such as the Greeneye, use fluorescence.

The common fluorescent tube relies on fluorescence. Inside the glass tube is a partial vacuum and a small amount of mercury. An electric discharge in the tube causes the mercury atoms to emit light. The emitted light is in the ultraviolet (UV) range, is invisible, and is harmful to most living organisms. The tube is lined with a coating of a fluorescent material, called the phosphor, which absorbs the ultraviolet and re-emits visible light. Fluorescent lighting is very energy efficient compared to incandescent technology, but the spectra produced may cause certain colors to appear unnatural.

In the mid 1990s, white light-emitting diodes (LEDs) became available, which work through a similar process. Typically, the actual light-emitting semiconductor produces light in the blue part of the spectrum, which strikes a phosphor compound deposited on the chip; the phosphor fluoresces from the green to red part of the spectrum. The combination of the blue light that goes through the phosphor and the light emitted by the phosphor produce a net emission of white light.

The modern mercury vapor streetlight is said to have been evolved from the fluorescent lamp.

Compact fluorescent lighting (CFL) is the same as any typical fluorescent lamp with advantages. It is self-ballasted and used to replace incandescents in most applications. They produce a quarter of the heat per lumen as incandescent bulbs and last about five times as long. These bulbs contain mercury and must be handled and disposed with care.

Fluorescence in several wavelengths can be detected by an array detector, to detect compounds from HPLC flow. Also, thin layer chromatography (TLC) plates can be visualized if the compounds or a coloring reagent is fluorescent.

Fingerprints can be visualized with fluorescent compounds such as ninhydrin.

Biological molecules can be tagged with a fluorescent chemical group (fluorophore) by a simple chemical reaction, and the fluorescence of the tag enables sensitive and quantitative detection of the molecule. Examples include:

Also, many biological molecules have an intrinsic fluorescence that can sometimes be used without the need to attach a chemical tag. Sometimes this intrinsic fluorescence changes when the molecule is in a specific environment, so the distribution or binding of the molecule can be measured. Bilirubin, for instance, is highly fluorescent when bound to a specific site on serum albumin. Zinc protoporphyrin, formed in developing red blood cells instead of hemoglobin when iron is unavailable or lead is present, has a bright fluorescence and can be used to detect these problems.

As of 2006, the number of fluorescence applications is growing in the biomedical biological and related sciences. Methods of analysis in these fields are also growing, albeit with increasingly unfortunate nomenclature in the form of acronyms such as: FLIM, FLI, FLIP, CALI, FLIE, FRET, FRAP, FCS, PFRAP, smFRET, FIONA, FRIPS, SHREK, SHRIMP, TIRF. Most of these techniques rely on fluorescence microscopes. These microscopes use high intensity light sources, usually mercury or xenon lamps, LEDs, or lasers, to excite fluorescence in the samples under observation. Optical filters then separate excitation light from emitted fluorescence, to be detected by eye, or with a (CCD) camera or other light detectors (photomultiplier tubes, spectrographs, etc). Much research is underway to improve the capabilities of such microscopes, the fluorescent probes used, and the applications they are applied to. Of particular note are confocal microscopes, which use a pinhole to achieve optical sectioning—affording a quantitative, 3D view of the sample.

Fluorescence occurs when a molecule or quantum dot relaxes to its ground state after being electronically excited.

is a generic term for photon energy where: h = Planck's constant and

= frequency of light. (The specific frequencies of exciting and emitted light are dependent on the particular system.)

State S0 is called the ground state of the fluorophore (fluorescent molecule) and S1 is its first (electronically) excited state.

A molecule in its excited state, S1, can relax by various competing pathways. It can undergo 'non-radiative relaxation' in which the excitation energy is dissipated as heat (vibrations) to the solvent. Excited organic molecules can also relax via conversion to a triplet state which may subsequently relax via phosphorescence or by a secondary non-radiative relaxation step.

Relaxation of an S1 state can also occur through interaction with a second molecule through fluorescence quenching. Molecular oxygen (O2) is an extremely efficient quencher of fluorescence because of its unusual triplet ground state.

Molecules that are excited through light absorption or via a different process (e.g. as the product of a reaction) can transfer energy to a second 'sensitized' molecule, which is converted to its excited state and can then fluoresce. This process is used in lightsticks.

is the rate of spontaneous emission of radiation and

is the sum of all rates of excited state decay. Other rates of excited state decay are caused by mechanisms other than photon emission and are therefore often called "non-radiative rates," which can include: dynamic collisional quenching, near-field dipole-dipole interaction (or resonance energy transfer), internal conversion and intersystem crossing. Thus, if the rate of any pathway changes, this will affect both the excited state lifetime and the fluorescence quantum yield.

Fluorescence quantum yield are measured by comparison to a standard with known quantology; the quinine salt, quinine sulfate, in a sulfuric acid solution is a common fluorescence standard.

The fluorescence lifetime refers to the average time the molecule stays in its excited state before emitting a photon. Fluorescence typically follows first-order kinetics:

is the concentration of excited state molecules at time

is the initial concentration and

is the decay rate or the inverse of the fluorescence lifetime. This is an instance of exponential decay. Various radiative and non-radiative processes can de-populate the excted state. In such case the total decay rate is the sum over all rates:

is the total decay rate,

the radiative decay rate and

the non-radiative decay rate. It is similar to a first-order chemical reaction in which the first-order rate constant is the sum of all of the rates (a parallel kinetic model). If the rate of spontaneous emission, or any of the other rates are fast, the lifetime is short. For commonly used fluorescent compounds typical excited state decay times for fluorescent compounds that emit photons with energies from the UV to near infrared are within the range of 0.5 to 20 nanoseconds. The fluorescence lifetime is an important parameter for practical applications of fluorescence such as fluorescence resonance energy transfer.

There are several rules that deal with fluorescence. The Kasha–Vavilov rule dictates that the quantum yield of luminescence is independent of the wavelength of exciting radiation.

This rule is not always valid and is violated severely in many simple molecules. A somewhat more reliable statement, although still with exceptions, is that the fluorescence spectrum shows very little dependence on the wavelength of the exciting radiation.