Fluorescein (chemical formula C20H12O5) is a highly fluorescent substance, absorbing light mainly in the blue range and emitting light mainly in the green range. This substance and its derivatives are commonly used in microscopy, in a type of dye laser as the gain medium, in forensics and serology to detect latent blood stains, and in dye tracing. Fluorescein is known as the color additive named D&C Yellow no. 7, and its disodium salt is called D&C Yellow no. 8. 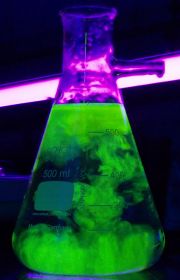 Fluorescein has an absorption maximum at 494-nanometer (nm) wavelength, and an emission maximum of 521 nm (in water). It has an acid dissociation constant (pKa) at 6.4 and multiple ionization equilibria. This leads to pH dependent absorption and emission over the range of 5 to 9. The wavelength of 460 nm is its "isosbestic point"—that is, absorption at this wavelength is equal for all pH values.

Also, the fluorescence lifetimes of the protonated and deprotonated forms of fluorescein are approximately three and four nanoseconds (ns). This property can be used to determine pH from non-intensity based measurements. The lifetimes can be recovered using time-correlated single photon counting or phase-modulation fluorimetry. 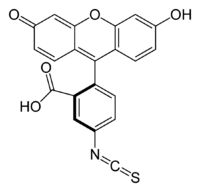 There are many fluorescein derivatives, for example fluorescein isothiocyanate, often abbreviated as FITC. In the FITC molecule, an isothiocyanate group (-N=C=S) replaces a hydrogen atom on the bottom ring of the fluorescein molecule. This derivative is reactive towards amine groups on proteins inside cells. Other derivatives include Oregon Green, Tokyo Green, SNAFL, and carboxynaphthofluorescein. These have been tailored for various chemical and biological applications where higher photostability, different spectral characteristics, or different attachment groups are needed.

Fluorescein can be prepared from phthalic anhydride and resorcinol in the presence of zinc chloride (catalyst) via the Friedel-Crafts reaction.

A second method to prepare fluorescein uses methanesulfonic acid as the catalyst. 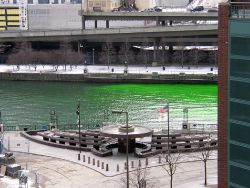 Fluorescein used in the Chicago River.

One of Fluorescein's more recognizable uses is in the Chicago River, where fluorescein is used to dye the river green on St. Patrick's Day.

Other uses of fluorescein include using it as a water-soluble dye added to rainwater in environmental testing simulations to aid in locating and analyzing any water leaks, and in Australia and New Zealand as a methylated spirit dye.

In biology, the isothiocyanate derivative of fluorescein is often used to label and track cells in fluorescence microscopy applications. Fluorescein may also be attached to biologically active molecules (such as antibodies), allowing biologists to target the fluorophore to specific proteins or structures within cells. This application is common in yeast display.

Fluorescein can also be linked to nucleoside triphosphates and incorporated into a probe for in situ hybridization. Fluorescein-labeled probes can be imaged using a technique known as FISH (fluorescent in situ hybridization), or targeted by antibodies using immunohistochemistry. The latter is a common alternative to digoxigenin, and the two are used together for labeling two genes in one sample. 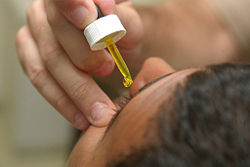 Fluorescein sodium is used extensively as a diagnostic tool in the field of ophthalmology. It is applied topically in the form of a drop or it can be injected intravenously to produce a fluorescein angiogram.