Phenylalanine, an amino acid found in many proteins such as hemoglobin, is essential in the human diet and normally is readily converted to the amino acid tyrosine in the human body.

Phenylalanine (in the L-isomer form, which is the only form involved in protein synthesis) is one of the twenty standard amino acids common in animal proteins and is required for normal functioning in humans. Phenylalanine also is classified as an "essential amino acid" since it cannot be synthesized by the human body from other compounds through chemical reactions and thus has to be taken in with the diet.

The intricate coordination of systems in the human body is seen in the enzyme-catalyzed process by which phenylalanine is converted into tyrosine, which in turn is converted into L-DOPA, the metabolic precursor of such other vitally important molecules as dopamine, norepinephrine (noradrenaline), and epinephrine (adrenaline). The serious disorder phenylketonuria is a disruption of such harmony due to a genetic defect that inhibits the body’s production of the key enzyme required for converting phenylalanine to tyrosine. Phenylketonuria causes mental retardation unless the syndrome is detected and treated starting shortly after birth with tight dietary restrictions.

The non-carbohydrate, non-nutritive artificial sweetener and flavor enhancer aspartame (aspartyl-phenylalanine-1-methyl ester) is produced through the synthesis reaction of phenylalanine with aspartic acid and methanol.

Phenylalanine's three letter code is Phe, its one letter code is F, its codons are UUU and UUC, and its systematic name is 2-Amino-3-phenylpropanoic acid (IUPAC-IUB 1983). 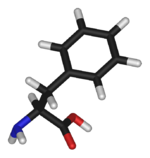 In biochemistry, the term amino acid is frequently used to refer specifically to alpha amino acids: those amino acids in which the amino (-NH2) and carboxylate (-COOH) groups are attached to the same carbon, the so-called α–carbon (alpha carbon). The general structure of these alpha amino acids is:

where R represents a side chain specific to each amino acid.

DL-phenylalanine is a racemic mixture of phenylalanine, meaning it contains equal amounts of the D and L isomers. DL-Phenylalanine is marketed as a nutritional supplement for its putative analgesic and antidepressant activities.

Phenylalanine cannot be made by animals, which have to obtain it from their diet.

Phenylalanine is produced by plants and most microorganisms from prephenate, an intermediate on the shikimate pathway (Lehninger 2000).

Prephenate is decarboxylated with loss of the hydroxyl group to give phenylpyruvate. This species is transaminated using glutamate as the nitrogen source to give phenylalanine and α-ketoglutarate.

The genetic codon for phenylalanine (UUU and UUC) was the first to be discovered. Marshall W. Nirenberg discovered that, when he inserted m-RNA made up of multiple uracil repeats into E. coli, the bacterium produced a new protein, made up solely of repeated phenylalanine amino acids.

The enzyme phenylalanine hydroxylase normally converts phenylalanine into tyrosine. If this reaction does not take place, phenylalanine accumulates and tyrosine is deficient, leading to the serious disorder Phenylketonuria.

Phenylalanine is a large, neutral amino acid (LNAA) that competes with other LNAAs for transport across the blood brain barrier (BBB) via the large neutral amino acid transporter (LNAAT). Excessive phenylalanine in the blood saturates the transporter, effectively decreasing the levels in the brain of other LNAAs, whose entry into the brain is impeded. Since these amino acids are required for protein and neurotransmitter synthesis, phenylalanine accumulation disrupts brain development in children, leading to mental retardation (Pietz et al. 1999)

Since phenylalanine uses the same active transport channel as tryptophan to cross the blood-brain barrier, in large quantities phenylalanine interferes with the production of serotonin, which is a metabolic product of tryptophan.

Left untreated, this condition can cause problems with brain development, leading to progressive mental retardation and seizures (see Biological aspects above). However, PKU is one of the few genetic diseases that can be controlled by diet. A diet low in phenylalanine and high in tyrosine can bring about a nearly total cure.

Individuals with this disorder are known as "phenylketonurics." Treatment of PKU includes the elimination of phenylalanine from the diet, and supplementation of the diet with tyrosine. Babies who are diagnosed with PKU must immediately be put on a special milk/formula substitute. Later in life, the diet continues to exclude phenylalanine-containing foods. Women affected by PKU must pay special attention to their diet if they wish to become pregnant, since high levels of phenylalanine in the uterine environment can cause severe malformation and mental retardation in the child. However, women who maintain an appropriate diet can have normal, healthy children. This dietary restriction also applies to pregnant women with hyperphenylalanine (high levels of phenylalanine in blood) because they do not properly metabolize phenylalanine.

If PKU is diagnosed early enough, an affected newborn can grow up with normal brain development, but only by eating a special diet low in phenylalanine for the rest of his or her life. This requires severely restricting or eliminating foods high in phenylalanine, such as breast milk, meat, chicken, fish, nuts, cheese, and other dairy products. Starchy foods such as potatoes, bread, pasta, and corn must be monitored. Many diet foods and diet soft drinks that contain the sweetener aspartame must also be avoided, as aspartame consists of two amino acids: phenylalanine and aspartic acid. Aspartame is found in many sugarless gums, sugarless soft drinks (such as Diet Coke, and Diet Pepsi), some forms of Lipton Tea, and a number of other food products.