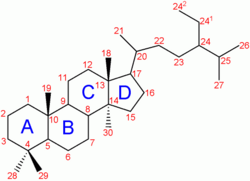 A steroid is any of a group of natural or synthetic, fat-soluble, organic compounds belonging to the class of lipids and characterized by a molecular core of four fused rings totaling 17 carbon atoms: three six-carbon rings and one five-carbon ring fused together. The type of steroid is determined by the three-dimensional configuration and the type of additional side chains and rings.

Steroids include such varieties as sterols, bile acids, adrenal and sex hormones, among others, and are ubiquitous in nature, being found in animals, plants, fungi and protozoa. Cholesterol is the most abundant steroid in mammalian cells. These various steroids perform many key biological functions, including involvement in cell membranes and serving as hormones. Steroids help to stimulate bone and muscle growth, puberty, tissue synthesis, and regulate metabolism and immune function. They are used medically, such as part of treatments of cancer and AIDS.

However, some steroids also have been used inappropriately. A well-known example is the use of anabolic steroids in competitive sports to gain an edge over other competitors, causing the danger of side effects to the user and harm to the integrity of the sport.

Steroid skeleton of lanosterol. The total number of carbons (30) reflects its triterpenoid origin. In some steroids, some carbons may be removed (such as carbon 18) or added (such as carbons 241 and 242) in downstream biosynthetic reactions.

Steroids belong to the class of biochemicals called lipids. Along with proteins, nucleic acids, and carbohydrates, lipids are one of the major classes of biologically important molecules (or biomolecules). They are water-insoluble, organic compounds that are highly soluble in nonpolar organic solvents. In addition to steroids, other lipids include fatty acids, glycerides (such as triglycerides or fat), phospholipids, and more complex lipid derivatives such as glycolipids (sugar-linked lipids).

A steroid is a lipid characterized by a carbon skeleton with four fused rings known as a cyclopentanoperhydrophenanthrene ring system. There are three fused six-carbon rings (cyclohexane) and a five-carbon ring (cyclopentane), fused such that there are a total of 17 carbon atoms in the molecular nucleus. Different steroids vary in the functional groups attached to these rings. All steroids are derived either from the sterol lanosterol (animals and fungi) or the sterol cycloartenol (plants). Both sterols are derived from the cyclization of the triterpene squalene. 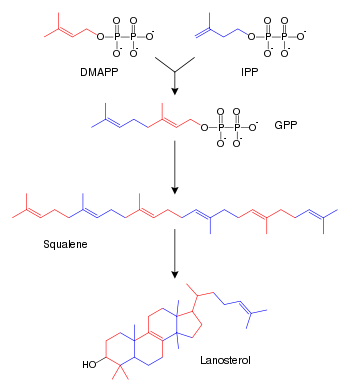 Some of the common categories of steroids: 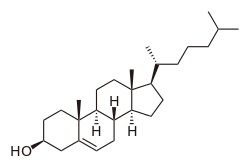 The chemical structure of cholesterol, showing the molecular core of 17 carbon atoms in four fused rings.

Cholesterol is a sterol lipid (a combination steroid and alcohol) with the chemical formula C27H45OH. It is found in the cell membranes of all human body tissues, and transported in the blood plasma of all animals. Lesser amounts of cholesterol are also found in plant membranes.

Cholesterol is an important component of cell membranes, which enhances their fluidity. Cholesterol also aids in the manufacture of bile (which helps digest fats), and is also important for the metabolism of fat-soluble vitamins.

The natural steroid hormones are generally synthesized from cholesterol in the gonads and adrenal glands. Because these steroids are lipid soluble, they can diffuse fairly freely from the blood through the cell membrane and into the cytoplasm of target cells. In the cytoplasm, the steroid may or may not undergo an enzyme-mediated alteration such as reduction, hydroxylation, or aromatization. In the cytoplasm, the steroid binds to the specific receptor, a large metalloprotein. Upon steroid binding, many kinds of steroid receptor dimerize: two receptor subunits join together to form one functional DNA-binding unit that can enter the cell nucleus. Once in the nucleus, the steroid-receptor ligand complex binds to specific DNA sequences and induces transcription of its target genes.

Steroid hormones are generally carried in the blood bound to specific carrier proteins such as sex hormone binding globulin or corticosteroid binding globulin. Further conversions and catabolism occurs in the liver, other "peripheral" tissues, and in the target tissues.

Estrogen (oestrogen) and progesterone are made primarily in the ovary and in the placenta during pregnancy and testosterone in the testes.

Anabolic steroids were first discovered in the early 1930s and have since been used for numerous medical purposes, including stimulation of bone growth, appetite, puberty, and muscle growth. The most widespread use of anabolic steroids is their use for chronic wasting conditions, such as cancer and AIDS. Anabolic steroids can produce numerous physiological effects including increases in protein synthesis, muscle mass, strength, appetite, and bone growth. Anabolic steroids have also been associated with numerous side effects when administered in excessive doses and these include elevated cholesterol, acne, elevated blood pressure, hepatotoxicity and alterations in left ventricle morphology.

Today anabolic steroids are controversial because of their widespread use in competitive sports and their associated side effects.