In zoology, a turkey is any of the large birds comprising the subfamily Meleagridinae of Phasianidae, a family of birds that consists of the pheasants and their allies. There are two extant (living) species of turkeys, the wild turkey (Meleagris gallopavo) and the ocellated turkey (Meleagris ocellata or Agriocharis ocellata). Formerly, turkeys were considered a distinct family, Meleagrididae, but more recently were reclassified as the subfamily Meleagridinae (AOU 2007).

Members of the two extant species have a distinctive, fleshy caruncle that hangs from the beak, called a snood. As with many galliform species (order Galliformes), the female is smaller than the male, and much less colorful. With wingspans of 1.5–1.8 meter (almost 6 feet), the turkeys are by far the largest birds in the open forests in which they live, and are rarely mistaken for any other species. The usual lifespan for a turkey is 10 years.

Turkeys provide a number of values to the ecosystem and to humans. Ecologically, they are integral to food chains, foraging a wide variety of plants and animals food, including acorns and nuts, seeds, berries, roots, insects, and even small vertebrates, like frogs and salamanders. In turn, they provide food for animals such as foxes, bobcats, and coyotes. For humans, turkeys provide a popular and nutritious food, rich in protein, niacin, and B vitamins (Bender and Bender 2005). They are a common staple of holiday feasts in North America,including Mexico, where turkey meat with mole sauce (mole de guajolote) is a popular national dish (Gerlach 2007).

Before the arrival of European settlers, wild turkeys, Meleagris gallopavo, inhabited North America, including the area that now is the United States and Mexico, and Central America (Herbst 2001). The Spanish conquistadors found them as a favorite domesticated animal among the Aztecs, and some were taken back to Spain. Since the modern domesticated turkey is a descendant of the wild turkey, it is concluded that the Aztecs had chosen to domesticate this species rather than the ocellated turkey, which is found in far southern Mexico. (The ocellated turkey, M. ocellata, also may have been domesticated, but by the Mayans.)

The Aztecs relied on the turkey (Mexican Spanish guajolote, from Nahuatl huexolotl) as a major source of protein (meat and eggs), and also utilized its feathers extensively for decorative purposes. The turkey was associated with their trickster god, Tezcatlipoca (Ramsdale 2006). The Aztecs in Mexico dedicated two religious festivals a year to the "huexolotlin," and all year round, it was not unusual for over 1000 turkeys to be sold each day in the Aztec market (Ramsdale 2006). The popularity of the turkey spread beyond the Aztecs to other tribes beyond Mexico by the time of the European arrival (Ramsdale 2006).

After taking the birds to Europe in 1523 (Bender and Bender 2005), they were bred by the Europeans into even plumper birds, and some of these domesticated turkeys went back to the New World in the 1600s, where they eventually were crossed with stocks of wild turkeys (Herbst 2001).

When Europeans first encountered turkeys in the Americas, they incorrectly identified the birds as a type of guinea fowl (Numida meleagris), also known as a turkey-cock from its importation to Central Europe through Turkey, and the name of that country stuck as the name of the bird. The confusion is also reflected in the scientific name: Meleagris is Greek for guinea-fowl.

The names for M. gallopavo in other languages also frequently reflect its exotic origins, seen from an Old World viewpoint, and add to the confusion about where turkeys actually came from. The many references to India seen in common names go back to a combination of two factors: First, the genuine belief that the newly-discovered Americas were in fact a part of Asia, and second, the tendency during that time to attribute exotic animals and foods to a place that symbolized far-off, exotic lands. The latter is reflected in terms like "Muscovy Duck" (which is from South America, not Muscovy). This was a major reason why the name "turkey-cock" stuck to Meleagris rather than to the guinea fowl (Numida meleagris): The Ottoman Empire represented the exotic East, much the same as India.

In a similar confusion, Spanish explorers thought the turkey to be a kind of peacock and called it by the same word, pavo. Today, the turkey is still called pavo in Spanish (except in Mexico, where the Nahuatl-derived name guajalote is commonly used), and the peacock is commonly referred to as pavo real ("royal turkey").

The two species are the wild turkey (M. gallopavo), largely of North America (United States and Mexico) and ocellated turkey (M. ocellata) of Central America and Mexico. Both species in the wild are strong fliers (up to 55 mph for short distances) and fast runners (15-30 mph) (Ramsdale 2006). 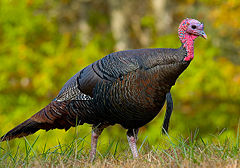 The wild turkey (Meleagris gallopavo) is native to North America and is the heaviest member of the Galliformes. Adult wild turkeys have a small, featherless, bluish head; a red throat in males; long reddish-orange to grayish-blue legs; and a dark-brown to black body. The head has fleshy growths called caruncles; in excited turkeys, a fleshy flap on the bill expands, becoming engorged with blood. Males have red wattles on the throat and neck. Each foot has four toes, and males have rear spurs on their lower legs.

Turkeys have a long, dark, fan-shaped tail and glossy bronze wings. They exhibit strong sexual dimorphism. The male is substantially larger than the female, and his feathers have areas of red, green, copper, bronze, and gold iridescence. Female feathers are duller overall, in shades of brown and gray. Parasites can dull coloration of both sexes; in males, coloration may serve as a signal of health (Hill et al. 2005). The primary wing feathers have white bars.

Turkeys have between 5,000 and 6,000 feathers. Tail feathers have the same length in adults, different lengths in juveniles. Males typically have a "beard" consisting of modified feathers that stick out from the breast. Beards average 9 inches in length. In some populations, 10 to 20 percent of females have a beard, usually shorter and thinner than that of the male. The average weight of the adult male is 8.2 kg (18 lb) and the adult female is 3.2 kg (8 lb). The average length is 1.09 m (3.5 ft) and the average wingspan is 1.44 m (4.8 ft). The record-sized adult male wild turkey, according to the National Wildlife Turkey Federation, was (38 lbs).

The ocellated turkey (Meleagris ocellata) has sometimes been treated in a genus of its own, as Agriocharis ocellata, but the differences between this species and Meleagris gallopavo are too small to justify generic segregation.

The ocellated turkey is a large bird, at around 70-100 cm (28-40 in) long and an average weight of 3 kg (6.6 lbs) in females and 5 kg (11 lbs) in males. Adult hens typically weigh in at about 8 pounds before laying eggs and 6-7 pounds the rest of the year, and adult males typically weighing about 11-12 pounds during breeding season. However, ocellated turkeys are much smaller than any of the subspecies of North American wild turkey.

The ocellated turkey exists in a 50,000 square mile range comprised of the Yucatán Peninsula (which includes the states of Quintana Roo, Campeche, and Yucatán), \parts of southern Tabasco, and northeastern Chiapas (NWTF 2006). They also can be found in Belize and the northern part of Guatemala.

The body feathers of both sexes are a mixture of bronze and green iridescent color. Although females can be duller with more green, the breast feathers do not generally differ and can not be used to determine sex. Neither sex have beards. Tail feathers of both sexes are bluish-grey with an eye-shaped, blue-bronze spot near the end with a bright gold tip. The spots, for which the ocellated turkey is named, lead some scientists to believe that the bird is more related to peafowl than to wild turkeys. The upper, major secondary wing coverts are rich iridescent copper. The primary and secondary wing feathers have similar barring to that of North American turkeys, but the secondaries have more white, especially around the edges. 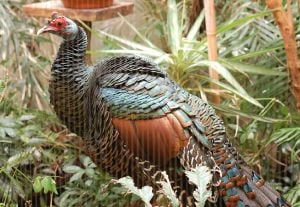 At the National Aviary

Both sexes have blue heads with some orange or red nodules, which are more pronounced on males. The males also have a fleshy blue crown covered with nodules, similar to those on the neck, behind the snood. During breeding season, this crown swells up and becomes brighter and more pronounced in its yellow-orange color. The eye is surrounded by a ring of bright red skin, which is most visible on males during breeding season. The legs are deep red and are shorter and thinner than on North American turkeys. Males over one year old have spurs on the legs that average 1.5 inches, with lengths of over 2 inches being recorded. These spurs are much longer and thinner than on North American turkeys.

Many turkeys have been described from fossils. The Meleagridinae are known from the Early Miocene (around 23 million years ago) onwards, with the extinct genera Rhegminornis (Early Miocene of Bell, U.S.) and Proagriocharis (Kimball Late Miocene/Early Pliocene of Lime Creek, U.S.). The former is probably a basal turkey, the other a more contemporary bird not very similar to known turkeys; both were much smaller birds. A turkey fossil not assignable to genus, but similar to Meleagris, is known from the Late Miocene of Westmoreland County, Virginia (Olson, 1985). 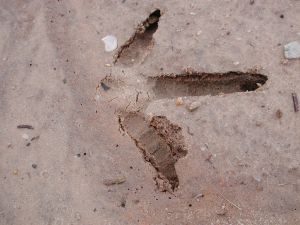 In the modern genus Meleagris, a considerable number of species have been described, as turkey fossils are robust, fairly often found, and turkeys show much variation among individuals. Many of these supposed fossilized species are now considered junior synonyms. One, the well-documented California turkey, Meleagris californica (tormerly Parapavo californica) became extinct recently enough to have been hunted by early human settlers (UU 2006; Broughton 2004), though its actual demise is more probably attributable to climate change at the end of the last ice age. The modern species and the California turkey seem to have diverged approximately one million years ago.

Turkeys known only from fossils: