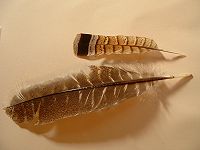 A feather is an epidermal growth containing keratin (tough, insoluble, fibrous structural proteins) that is part of the distinctive outer covering, or plumage, on birds. The presence of feathers is the outstanding characteristic that distinguishes Class Aves from all other living groups.

Feathers provide a number of key values for birds, being important for flight, insulation, balance, protection, and mating displays. However, they also provide benefits for human beings, who have learned to use them for insulation in blankets, coats, and sleeping bags, for comfortable bedding such as pillows and mattresses, and many other current and historical uses, including as part of religious and spiritual ritual. 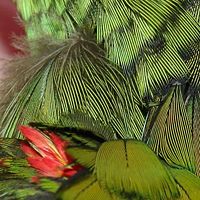 Extreme closeup of the feathers of a baby Yellow-headed Parrot.

Feathers are among the most complex structural organs found in vertebrates.

Feathers are integumentary appendages formed by controlled proliferation of cells in the epidermis, or outer skin layer, that produce keratin proteins. These structure proteins are rivaled in biological toughness only by chitin.

Feathers are composed of β-keratins, which are harder than the α-keratins used in hair (including wool), horns, nails, claws, and hooves of mammals. The β-keratins also are used in the scales and claws of reptiles, their shells (chelonians, such as tortoise, turtle, terrapin), and in the beaks and claws of birds. The β-keratins are composed of protein strands hydrogen-bonded into β-pleated sheaths, which are then further twisted and cross linked by disulfide bridges into structures tougher than the α-keratins. 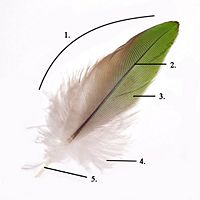 A typical vaned feather features a main shaft, or rachis, and fused to this are a series of branches, or barbs. The barbs themselves are also branched and form the barbules. These barbules have minute hooks called barbicels for cross-attachment. Down feathers are fluffy because they lack barbicels, so the barbules float free of each other, allowing the down to trap much air and provide excellent thermal insulation. At the base of the feather, the rachis expands to form the hollow tubular calamus, or quill, which inserts into a follicle in the skin.

The Dyck texture is what causes the colors blue and green in most parrots. This is due to a texture effect in microscopic portions of the feather itself, rather than pigment, or the Tyndall effect as was previously believed. The spectacular red feathers of certain parrots owe their vibrancy to a rare set of pigments found nowhere else in nature.

A bird's feathers are replaced periodically during its life through molting. New feathers are formed through the same follicle from which the old ones were fledged.

Some birds have a supply of powder-down feathers that continuously molt, with small particles regularly breaking off from the ends of the barbules. These particles produce a powder that sifts through the feathers on the bird's body and acts as a waterproofing agent and a feather conditioner. Most waterbirds produce a large amount of powder down. Waterproofing can be lost by exposure to emulsifying agents due to human pollution. Feathers can become waterlogged and birds may sink. It is also very difficult to clean and rescue birds whose feathers have been fouled by oil spills.

Bristles are stiff, tapering feathers with a large rachis but few barbs. Rictal bristles are bristles found around the eyes and bill. They serve a similar purpose to eyelashes and vibrissae in mammals.

Feathers provide many functions. Feathers insulate birds from water and cold temperatures. Individual feathers in the wings and tail play important roles in controlling flight. Although feathers are light, a bird's plumage weighs two or three times more than its skeleton, since many bones are hollow and contain air sacs. Feathers also aid in balance.

Color patterns serve as camouflage against predators for birds in their habitats, and by predators looking for a meal. As with fish, the top and bottom colors may be different to provide camouflage during flight, making it difficult for predators below or above to see the birds. Feathers also provide protection against mechanical damage.

Striking differences in feather patterns and colors also are part of the sexual dimorphism of many bird species and are particularly important in selection of mating pairs. The remarkable colors and feather sizes of some species have never been fully explained.

It has been thought that feathers evolved from the scales of reptiles, but while recent research suggests that while there is a definite relationship between these structures, the exact origin of feathers remains uncertain (Prum and Brush 2002). Experiments show that the same protein (when missing before birth) that causes bird feet to stay webbed, causes bird scutes and scales to become feathers (Poling 1996).

Several dinosaurs have been discovered with feathers on their limbs that would not have functioned for flight. One theory is that feathers originally developed on dinosaurs as a means of insulation; those small dinosaurs that then grew longer feathers may have found them helpful in gliding, which would have fostered a process that could have resulted in some proto-birds like Archaeopteryx and Microraptor zhaoianus. Other dinosaurs discovered with feathers include Pedopenna daohugouensis, Sinosauropteryx, and Dilong paradoxus.

Human beings have a number of practical, cultural, and religious uses for feathers.

Because feathers are both soft and excellent at trapping heat, they are sometimes used in high-class bedding, especially pillows, blankets, and mattresses. They are also used as filling for winter clothing, such as quilted coats and sleeping bags. Goose down especially has great "loft," the ability to expand from a compressed, stored state to trap large amounts of compartmentalized, insulating air.

Bird feathers have long been used for fletching (aerodynamically stabilizing) arrows. They have also been used historically for ink pens. Colorful feathers, such as those belonging to pheasants, have been used to decorate fishing lures and hats.

During the late nineteenth and early twentieth centuries, a booming international trade in plumes, to satisfy market demand in North America and Europe for extravagant head-dresses as adornment for fashionable women, caused so much destruction (for example, to egret breeding colonies) that a major campaign against it by conservationists caused the fashion to change and the market to collapse.

Eagle feathers have great cultural and spiritual value to American Indians as religious objects. The religious use of eagle and hawk feathers are governed by the eagle feather law (50 CFR 22), a federal law limiting the possession of eagle feathers to certified and enrolled members of federally recognized Native American tribes (DeMeo 1995).

Various birds and their plumages serve as cultural icons throughout the world, from the hawk in ancient Egypt to the bald eagle and the turkey in the United States. In Greek mythology, Icarus tried to escape his prison by attaching feathered wings to his shoulders with wax, which melted near the Sun.