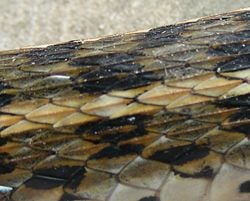 In zoology, scale (Greek lepid, Latin squama) generally refers to a small, platelike outgrowth of the skin of an animal that affords protection. These dermal or epidermal structures form the integument of reptiles, most fish, and some mammals, and similar structures are found on insects, such as butterflies and moths.

In lepidopteran species, scales are plates on the surface of the insect wing, and provide coloration.

Scales provide various values for the animals with them, including protection of the body, aid in locomotion, retention of moisture, and protective coloration, such as camouflage and warnings to potential predators. For humans, scales also add to the aesthetic beauty and wonder of nature, such as the whole beautiful greens, blues, reds, oranges, and other colors in butterfly wings, and the colors, textures, and forms of scales in various vertebrates. Scales have also been used in the manufacture of items like purses and apparel.

Scales are generally classified as part of an organism's integumentary system. Scales are quite common and have evolved multiple times with varying structure and function. There are various types of scales according to shape and to class of animal. 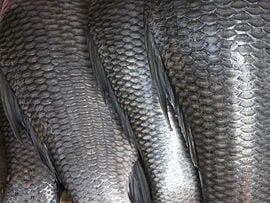 Most fish has scales, which can be bony or non-bony. Extant agnathans (hagfish and lampreys) are scaleless, while sharks and their relatives in Chondrichthyes have dentinal placoid scales termed denticles, and bony fish (class or superclass Osteichthyes) have bony scales (Lagler et al. 1962). The bony fish are the largest class of vertebrates in existence today, with over 26,000 species, and they comprise over 95 percent of all fish species. These scales are formed in the skin membrane and are dermal ossifications rather than epidermal.

Like the lampreys in Agnatha, the freshwater catfishes and some sticklebacks are scaleless among the bony fish (Lagler et al. 1962). Some other bony fish are nearly scaleless, such as the paddlefish (Polyodon) and the freshwater swordbill (Psephurus).

Scales may be classified on the basis of shape or structure.

Classification of fish scales by shape

Among types of scales classified on the basis of shape are (Lagler et al. 1962):

Classification of fish scales by structure

Among scales classified on the basis of structure, there are two basic types: placoid and non-placoid. In turn, non-placoid can be classified as cosmoid, ganoid, and leptoid or bony-ridge.

Placoid scales or denticles are small outgrowths that cover the skin of many cartilaginous fish. The cartilaginous fishes or Chondrichthyes are a major class of jawed fish that includes the sharks, rays, and skates, and whose skeleton is characterized by rubbery cartilage, which is very light and flexible, rather than bone, as in the bony fishes (class Osteichthyes]]. The placoid scales are similar in structure to teeth, and teeth may have evolved from denticle-like structures in primitive fish. The placoid scales in sharks are formed of dentine with dermal papillae located in the core. These scales develop from the dermal layer of the skin, which is in contrast to the epidermal development seen in the elasmoid scales of tetrapods. The shape of denticle varies from species to species and can be used in identification. Shark skin is covered in denticles, and can therefore be as rough as sandpaper.

As they grow, cycloid and ctenoid scales add concentric layers. The scales of bony fishes are laid so as to overlap in a head-to-tail direction, a little like roof tiles, allowing a smoother flow of water over the body and therefore reducing drag.

Fish scales are useful to ichthyologists for classification of fish, determining the life history of a fish, and for understanding the relatedness of lineages, particularly since even fossil scales can be examined (Lagler et al. 1962). For example, in the Atlantic salmon (Salmo salar) scales can reveal how old a fish was when it went to sea, when it first spawned, and how many times it spawned (Lagler et al. 1962). Examination of scales can also help in identifying what fish have been consumed by predators in a study of their food habits.

Reptile scale types include cycloid, granular (which appear bumpy), and keeled (which have a center ridge).

Elaborately shaped scales on the head of a Vine snake, Ahaetulla nasuta.

Snakes are entirely covered with scales or scutes of various shapes and sizes. Scales protect the body of the snake, aid it in locomotion, allow moisture to be retained within, and give simple or complex coloration patterns, which help in camouflage and anti-predator display.

Snakes periodically molt their scaly skins and acquire new ones. This permits replacement of old worn out skin, disposal of parasites and is thought to allow the snake to grow. The arrangement of scales is used in identification of snake species.

Snakes have been part and parcel of culture and religion. Vivid scale patterns have been thought to have influenced early art. The use of snake-skin in manufacture of purses, apparel and other articles led to large-scale killing of snakes, giving rise to advocacy for use of artificial snake-skin. Snake scales also are to be found as motifs in fiction, video games and films.

A snake's scaled integument is formed by the differentiation of the snake's underlying skin or epidermis. Snake scales are made of keratin, the same material of which hair and fingernails are made. A snake is born with a fixed number of scales. The scales do not increase in number as the snake matures nor do they reduce in number over time.

Each snake scale has an outer surface and an inner surface. The skin from the inner surface hinges back and forms a free area which overlaps the base of the next scale that emerges below this scale (Greene 1997). Snakes have smaller scales around the mouth and sides of the body which allow expansion so that a snake can consume prey of much larger width than itself.

Snake scales are of different shapes and sizes. Snake scales may be granular, have a smooth surface, or have a longitudinal ridge or keel on it. Often, snake scales have pits, tubercles, and other fine structures which may be visible to the naked eye or under a microscope. Snake scales may be modified to form fringes, as in the case of the Eyelash Bush Viper, Atheris ceratophora, or rattles as in the case of the rattlesnakes of North America (Greene 1997). Certain primitive snakes such as boas, pythons, and certain advanced snakes such as vipers have small scales arranged irregularly on the head. Other more advanced snakes have special large symmetrical scales on the head called shields or plates (Greene 1997). Another example of differentiation of snake scales is a transparent scale called the brille or spectacle, which covers the eye of the snake. 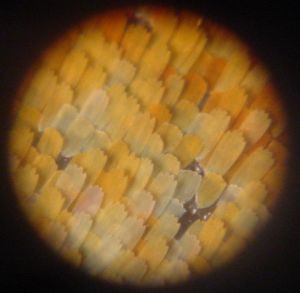 Scales (magnified) on the wing of butterflies give the colors

Butterfly and moth species of the order Lepidoptera (Greek "scale-winged") have membranous wings covered in delicate, powdery scales. Each scale consists of a series of tiny stacked platelets of organic material.

The coloration of butterfly wings is created by these minute scales. These scales are pigmented with melanins that give them blacks and browns, but blues, greens, reds, and iridescence are usually created not by pigments but the microstructure of the scales. This structural coloration is the result of coherent scattering of light by the photonic crystal nature of the scales (Mason 1927; Vukusic et al. 2000; Prum et al. 2006). Because the thickness of the platelets is on the same order as the wavelength of visible light, the plates lead to structural coloration and iridescence through the physical phenomenon described as thin-film optics.