Osteichthyes, known as the bony fish, are a taxonomic class (or superclass) of fish and the largest class of vertebrates in existence today. With over 26,000 species, they comprise over 95 percent of all fish species. The Osteichthyes include the ray-finned fish (subclass or class Actinopterygii) and lobe finned fish (subclass or class Sarcopterygii). However, some taxonomic schemes (see classification) do not consider Osteichthyes a formal taxonomic group, as it is not monophyletic (Nelson 2006), although the term is retained for vernacular use for those actinopterygians and sarcopterygians conventionally termed fishes.

The members of Osteichthyes represent an extraordinary diversity of forms, including the "living fossil" coelacanths, long "sea-serpent" oarfish, tiny cichlids, whiskered catfish, colorful clownfish, voracious piranhas, unique seahorses, and so forth. This diversity of forms, behaviors, and colors provides aesthetic joy to humans, as well as a variety of practical uses—food, sportfishing, aquarium fish, and so forth.

Although lampreys, sharks, and rays are also fish, some individuals commonly use the term only in reference to the jawed bony fish, that is, members of Osteichthyes. 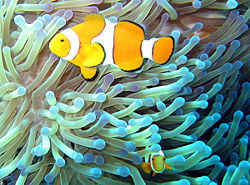 Fish are a very diverse assemblage, so much so that the term fish is itself more one of convenience than a taxonomic rank (Nelson 1994). In general, a fish can be defined as a poikilothermic (cold-blooded), water dwelling vertebrate with gills throughout life, and limbs—if present—in the form of fins. Poikilothermic refers to the fact that the internal temperatures of fish vary, often matching the ambient temperature of the environment. (However, some fish, such as the blue-fin tuna, can flourish at significantly higher internal temperatures than the surrounding water.)

With over 27,000 known extant (living) species, fish constitute more than one-half of the total vertebrate species. The vast majority of fish are members of Osteichthyes. Nelson (1994) recognizes 45 orders, 435 families, 4079 genera, and 23,689 species of osteichthyans (bony fishes).

Within the Osteichthyes, two extant subclasses (or classes) are generally recognized: the Sarcopterygii (lobe-finned fish) and the Actinopterygii (ray-finned or spiny-finned fish). Most bony-fish belong to the Actinopterygii; there are only eight living species of lobe finned fish, including the lungfish (6 extant species) and coelacanths (2 extant species). Some species of lobe-finned fish have jointed bones. Actinopterygii, or ray-finned fish, include the most familiar fish, such as sturgeons, gars, eels, carp, herrings, anchovies, catfishes, goldfishes, piranhas, oarfish, seahorses, bass, cichlids, pickerel, salmon, and trout.

The Actinopterygii are generally classified into two groups—the Chondrostei and the Neopterygii—the latter of which includes the Teleostei (modern bony fishes), a classification into which most fish fit today. The Sarcopterygii are traditionally divided into the lungfish and coelacanths.

However, while using Osteichthyes as vernacular for actinopterygians and those sarcopterygians conventionally termed fishes, Nelson (1994) prefers not to use the term as a formal taxon as it "is clearly not a monophyletic group." Rather, Nelson (1994) uses the term "Euteleostomi" for Sacropterygii and Actinopterygii, while Nelson (2006) places Actinopterygii and Sarcopterygii (along with the extinct Acanthodii) in grade Teleostomi. Furthermore, Nelson (2006) places the tetrapods (mammals, birds, reptiles, amphibians) in class Sarcopterygii in order to make this a monophyletic group.

Osteichthians are characterized by a relatively stable pattern of cranial bones, rooted teeth, and medial insertion of mandibular muscle in lower jaw. The head and pectoral girdles are covered with large dermal bones. The eyeball is supported by a sclerotic ring of four small bones, but this characteristic is missing or modified in many modern species.

The labyrinth in the inner ear contains large otoliths. The braincase, or neurocranium, is frequently divided into anterior and posterior sections divided by fissure.

Osteichthyans have a lung or swim bladder. They do not have fin spines, but instead support the fin with lepidotrichia (bone fin rays). They also have an operculum, which helps them breathe without having to swim.

The fin-limbs of sarcopterygiians show such a strong similarity to the expected ancestral form of tetrapod limbs that they have been universally considered the direct ancestors of tetrapods (four-legged vertebrates) in the scientific literature.

One of the best-known innovations of the osteichthians is endochondral bone or "replacement" bone, i.e. bone ossified internally, by replacement of cartilage, as well as perichondrally, as "spongy bone."

In the more general vertebrates, there are various types of calcified tissue: dentine, enamel (or "enameloids"), and bone, plus variants characterized by their ontogeny, chemistry, form and location. But endochondral bone is unique because it begins life as cartilage.

In more basal vertebrates, cartilaginous structures can become superficially calcified. However, in osteichthians, the circulatory system invades the cartilaginous matrix. This permits the local osteoblasts (bone-forming cells) to continue bone formation within the cartilage and also recruits additional, circulating osteoblasts. Other cells gradually eat away at the surrounding cartilage. The net result is that the cartilage is replaced from within by a somewhat irregular vascularized network of bone. Structurally, the effect is to create a relatively lightweight, flexible, "spongy" bone interior, surrounded by an outline of dense, lamellar periostial bone. Since this bone now surrounds other bone, rather than cartilage, it is referred to as periostial rather than perichondral. This is the unique endochondral bone from which the osteichthians derived their name, as well as many structural advantages.

However useful endochondral bone may be, it is also much heavier and less flexible than cartilage. Thus, many modern osteichian groups, including the extremely successful teleosts, have evolved away from extensive use of endochondral bone.

The ocean sunfish is the most massive bony fish in the world (but not the longest one; that honor goes to the oarfish). Specimens of ocean sunfish have been observed up to 3.33 m (11 ft) in length and weighing up to 2,300 kg (5,070 lb). Other very large bony fish include the Atlantic blue marlin, some specimens of which have been recorded as in excess of 820 kilograms (1,807.4 lb.), the black marlin, and some sturgeon species.