Trout is the common name for several species of freshwater and anadromous fish in the family Salmonidae, whose members also include salmon, whitefish, char, and their relatives. Sometimes the term "trout" is used to refer more generally to any member of the Salmoniformes order, which includes only the one family Salmonidae (ITIS 2004; Nelson 2006). All fish called trout are members of the subfamily Salmoninae, and among the fish in the genera Salvelinus (chars), Salmo (Atlantic trouts), and Oncorhynchus (Pacific trouts and Pacific salmon).

Trout provide important functions in ecosystems and for humans. Ecologically, they are integral in food chains, consuming aquatic invertebrates (particularly insects) and amphibians (tadpoles), while being consumed by birds (kingfishers, mergansers, etc.) and mammals (weasels, raccoons, etc.). For humans, they are prized both for sport fishing and as food, and are often raised in hatcheries for both stocking streams for fishing and for food. 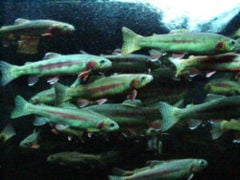 Salmonidae is a family of ray-finned fish (class (Actinopterygii), the only living family of the order Salmoniformes. The Atlantic salmons and trouts of genus Salmo give the family and order their names.

Salmonidae is divided by Nelson (2006) into three subfamilies: Coregoninae, Thymallinae, and Salmoninae. Fish called trout are all part of the Salmoninae subfamily, and part of three of the seven genera in the subfamily: Salvelnus, Salmo, and Oncorhynchus. Members of the genus Salvelinus are often called "chars" or charrs, with species known as trout found in the two subgenera of Baione (Salvelinus fontinalis, the brook trout, and S. namaycus, lake trout) and Salvelinus (bull trout) (Nelson 2006). Members of the genus Salmo are commonly known as "Atlantic trouts," although this genus also includes a fish known as the Atlantic salmon. Members of the genus Oncorhynchus are known as the "Pacific trouts and Pacific salmon," with the salmon placed in the subgenus Oncorhynchus (Pacific salmon) and the trouts in the subgenus Rhabdofario (Pacific trouts, such as the cutthroat trout, golden trout, and rainbow trout).

Members of the Salmonidae family characterized by the presence of a small adipose (fatty) fin along the back, near the tail; gill members extending far forward, free from isthmus; the presence of a pelvic axillary process; 50 to 75 vertebrae with the last three vertebrae turned up; seven to 20 brachiostegal rays; and a tetraploid karyotype (Nelson 2006). They lack spines in their rays. Members of the Salmoninae subfamily have fewer than 16 dorsal fin rays, small scales, teeth on the maxilla; and presence of orbitosphenoid and suprapreopercular (Nelson 2006). Trout include freshwater and anadromous members, which are native to the Northern Hemisphere, but are now widely distributed.

Trout that live in different environments can have dramatically different colorations and patterns. Mostly, these colors and patterns form as camouflage, based on the surroundings, and will change as the fish moves to different habitats. Trout in, or newly returned from the sea, can look very silvery, while the same "genetic" fish living in a small stream or in an alpine lake could have pronounced markings and more vivid coloration. It is virtually impossible to define a consistent, definitive color pattern for a specific breed.

There are many species, and even more populations that are isolated from each other and morphologically different. However, since many of these distinct populations show no significant genetic differences, what may appear to be a large number of species is considered a much smaller number of distinct species by most ichthyologists. The trout found in the eastern United States are a good example of this. The brook trout, the aurora trout, and the (extinct) silver trout all have physical characteristics and colorations that distinguish them, yet genetic analysis shows that they are one species, Salvelinus fontinalis.

Lake trout (Salvelinus namaycush), like brook trout, actually belong to the char genus. Lake trout inhabit many of the larger lakes in North America, and live much longer than rainbow trout, which have an average maximum lifespan of seven years. Lake trout can live many decades, and can grow to more than 30 kilograms (66 pounds). 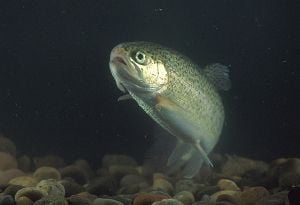 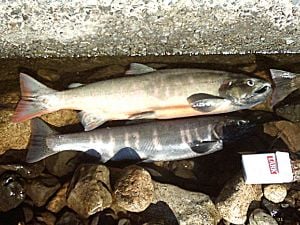 Fish referred to as trout include:

The name speckled trout is used both as another name for brook trout, Salvelinus fontinalis, of the eastern North America, and for a fish found in the Gulf of Mexico and other places in the United States that also goes by the name of spotted seatrout and that is not in fact a trout at all, but a member of the drum family ((Sciaenidae).

Trout are usually found in cool (50-60°F, 10-15°C), clear streams and lakes, although many of the species have anadromous strains as well.

Trout are distributed naturally throughout North America, northern Asia, and Europe. Several species of trout were introduced to Australia and New Zealand by amateur fishing enthusiasts in the nineteenth century, effectively displacing and endangering several upland native fish species. The introduced species included brown trout from England and rainbow trout from California. The rainbow trout were a steelhead strain, generally accepted as coming from Sonoma Creek. The rainbow trout of New Zealand still show the steelhead tendency to run up rivers in winter to spawn (Landergren 1999). 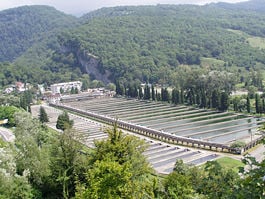 A trout farm in Sochi, Russia.

Trout are valued highly both for commercial fisheries and for sport.

Trout are both caught wild and reared in aquaculture for food purposes. As a group, trout are somewhat bony, but the flesh is generally considered to be appetizing. Their flesh is firm and has medium to high fat content, and they are a good source of protein, vitamin B12, and selenium, and a source of vitamin B6, iron, and iodine (Herbst 2001; Bender and Bender 2005). They can be fried, poached, baked, steamed, grilled, and broiled, and can be obtained fresh or frozen, canned, smoked, or kippered (Herbst 2001). Popular species include the brook or speckled trout, which are generally small in size (six to eight inches), the rainbow trout, which can grow very large (up to eight pounds) but commercially raised tend to harvested when small (about eight ounces), the steelhead or salmon trout, cutthroat trout, and brown trout (Herbst 2001).

Additionally, they provide a good fight when caught with a hook and line, and are sought after recreationally. Because of their popularity, trout are often raised on fish farms and planted into heavily fished waters, in an effort to mask the effects of overfishing and improve the fishing opportunities. While they can be caught with a normal rod and reel, fly fishing is a distinctive method developed primarily for trout, and now extended to other species.

Today trout are plentiful in North America, but at one point their populations were at risk. Overfishing and pollution, among other factors, had caused the once abundant populations to decline significantly by the late 1860s. However, by the end of the nineteenth century, various measures, including raising trout in hatcheries, were in existence and allowed the trout populations to recover (Herbst 2001).