Lamprey is the common name for elongated, eel-like, jawless fish comprising the family Petromyzontidae, characterized by a primitive vertebrae made of cartilage, slimy skin without scales, unpaired fins, a notochord that is retained by the adult, and a circular, jawless mouth with teeth on the oral disk. Because lampreys resemble eels in external appearance, they sometimes are called lamprey eels, but otherwise are not closely related to the eels, which are part of the jawed, bony fish class (Osteichthyes).

Lampreys are both freshwater and anadromous (living mostly in the oceans but returning to freshwater to breed), with the larvae undergoing radical metamorphosis in freshwater. Many lampreys are parasitic, rasping through the skin of other fish to feed on their blood (hematophagy).

While a prized food, considered a delicacy in some nations, the introduction of the lampreys into the North American Great Lakes in the early twentieth century has led to their being a destructive invasive species.

As with the salmon, the life cycle of the lamprey reflects on altruism and the parental commitment to reproduction. While for all animals having offspring requires an expenditure of energy, for lampreys this expenditure is total, for all lampreys die soon after spawning (Nelson 1994).

Lampreys are one of two extant groups of the jawless fish, which are classified as superclass or class Agnatha. While most taxa of Agnatha are extinct, remaining are the hagfish (family Myxinidae of order Myxiniformes of the class Myxini) and the lampreys (family Petromyzontidae of the order Petromyzontiformes of the class Cephalasidomorphi). Both of these lack jaws and both have slimy skin without scales or plates. However, hagfish, which sometimes are known as slime eels, lack vertebrae, while the lampreys, sometimes known as lamprey eels, have primitive vertebrae made of cartilage. Lampreys also have a notochord that remains throughout life, which in most vertebrates is found in the embryo stage only. Hagfish are found in the oceans, while lampreys are found in both freshwater and ocean environments. 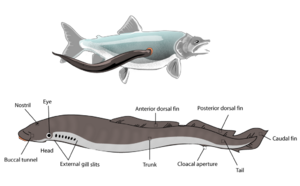 Basic external anatomy of the lamprey

Adult lampreys have well-developed, lateral eyes; one or two dorsal fins; separate sexes; one nostril on the top of the head; seven pairs of external lateral gill openings; and teeth on the oral disk and tongue (except among fossil organisms) (Nelson 1994). They lack bone, do not have paired fins, and barbels are absent (Nelson 1994). They do have a vertebrae made of cartilage and retain the notochord in the adult. (Note that many of these features differ markedly from the other agnathan, the hagfish, which, while it lacks paired fins and bone and retains a notochord, also is characterized by the lack of a vertebrae, lack of a dorsal fin, barbels present around the mouth, degenerate eyes, teeth only on the tongue, and ovaries and testes in the same individual (Nelson 1994)).

With a diploid chromosome number of 164 to 168 (or higher), lampreys of the Northern Hemisphere, Petromyzontinae, have the highest numbers of chromosomes of any vertebrate group (Nelson 1994).

The lamprey body externally resembles eels in being elongated and snake-like, as well as the absence of pelvic fins and a generally naked appearance; however, while lampreys lack scales, some eels have scales embedded in the skin. An adult lamprey can range anywhere from 13 to 100 centimeters (5 to 40 inches) long.

The larval stage (ammocoete) lacks teeth and has only have rudimentary eyes, and undergoes radical transformation, in freshwater, to the adult stage, after several years of burrowing. The larvae reach a maximum length of about 10 centimeters (Nelson 1994).

Nelson (1994) recognizes 41 extant species, of which 32 are almost always confined to freshwater and 18 are parasitic.

Lampreys are found in most temperate regions except Africa. Lampreys live mostly in coastal and fresh waters, although at least one species, Geotria australis, probably travels significant distances in the open ocean, as is evidenced by the lack of reproductive isolation between Australian and New Zealand populations, and the capture of a specimen in the Southern Ocean between Australia and Antarctica. Their larvae have a low tolerance for high water temperatures, which is probably why they are not found in the tropics. 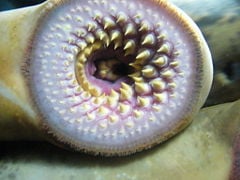 Mouth of a river lamprey

Lampreys begin life as burrowing freshwater larvae (ammocoetes). At this stage, they are toothless, have rudimentary eyes, and feed on microorganisms. This larval stage can last five to seven years and, hence, was originally thought to be an independent organism. After these five to seven years, they transform into adults in a metamorphosis that is at least as radical as that seen in amphibians, and which involves a radical rearrangement of internal organs, development of eyes, and transformation from a mud-dwelling filter feeder into an efficient swimming predator, which typically moves into the sea to begin a predatory/parasitic life.

Not all lampreys can be found in the sea. Some lampreys are landlocked and remain in fresh water, and some of these stop feeding altogether as soon as they have left the larval stage. The landlocked species are usually rather small.

Lampreys may be parasitic or nonparasitic, and both forms can exist in individuals of the same species or closely related species (Nelson 1994). The parasitic phase occurs after metamorphosis from the ammocoete larvae, prior to reproduction, and involves attaching their mouth to a fish (rarely other animals), rasping through their skin, secreting an anticoagulant to the host, and feeding on the blood and tissues of the host. In most species, this phase lasts about 18 months. The nonparasitic phase is confined to freshwater, but parasitic phases may be freshwater or anadromous (Nelson 1994). Parasitic freshwater lampreys are not known to occur in the Southern Hemisphere (Nelson 1994).

To reproduce, lampreys return to fresh water (if they left it), build a nest, then spawn; that is, lay their eggs or excrete their semen, and then invariably die. In Geotria australis, the time between ceasing to feed at sea and spawning can be up to 18 months. Eggs are small and not yolky (Nelson 1994).

Studies suggest that lampreys have a unique type of immune system with parts that are unrelated to the antibodies found in mammals. They also have a very high tolerance to iron overload, and have biochemical defenses to detoxify this metal.

Lamprey fossils are rare; cartilage does not fossilize as readily as bone. Until 2006, the oldest known fossil lampreys were from Early Carboniferous limestones (from the Mississippian Mazon Creek lagerstätte and the Bear Gulch Limestone sequence), laid down in marine sediments in North America: Mayomyzon pieckoensis and Hardistiella montanensis.

In 2006, Chang et al. reported on a fossil lamprey from the same Early Cretaceous lagerstätten that have also yielded feathered dinosaurs, in the Yixian Formation of Inner Mongolia. The new species, morphologically similar to Carboniferous and modern forms, was given the name Mesomyzon mengae ("middle lamprey"). The exceedingly well-preserved fossil showed a well-developed sucking oral disk, a relatively long branchial apparatus showing branchial basket, seven gill pouches, gill arches and even the impressions of gill filaments, as well as about 80 myomeres of its musculature.

Note that some taxonomists place the lampreys and hagfish in Phylum Chordata under the super-class Agnathostomata (without jaws). The other super-class of the phylum is Gnathostomata (jaw-having) and includes the following classes: Chondrichthyes, Ostieoichthyes, Amphibia, Reptila, Aves, and Mammalia.

Lampreys have long been used as food for humans. During the Middle Ages, they were widely eaten by the upper classes throughout Europe, especially during fasting periods, since their taste is much meatier than that of most true fish. King Henry I of England is said to have died from eating "a surfeit of lampreys" (Green 2006).

Especially in southwestern Europe (Portugal, Spain, France), they are still a highly prized delicacy. Overfishing has reduced their number in those parts. Lampreys are also consumed in Sweden, Finland, the Baltic countries, and South Korea. 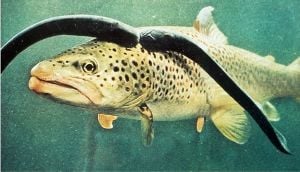 Lampreys attached to a trout

On the other hand, sea lampreys have become a major plague in the North American Great Lakes after artificial canals allowed their entry during the early twentieth century. They are considered an invasive species, have no natural enemies in the lakes, and prey on many species of commercial value, such as lake trout. Since the majority of North American consumers, unlike Europeans, do not accept lampreys as food fish, the Great Lakes fishery has been adversely affected by their invasion. Lampreys are now fought mostly in the streams that feed the lakes, with special barriers to prevent the upstream movement of adults, or by the application of toxicants called lampricides, which are harmless to most other aquatic species. However, those programs are complicated and expensive, and they do not eradicate the lampreys from the lakes but merely keep them in check. New programs are being developed including the use of chemically sterilized male lamprey in a method akin to the sterile insect technique. Research is currently under way on the use of pheromones and how they may be used to disrupt the life cycle (Sorensen et al. 2005). Control of sea lampreys in the Great Lakes is conducted by the U.S. Fish and Wildlife Service and the Canadian Department of Fisheries and Oceans. The work is coordinated by the Great Lakes Fishery Commission.

Historically, a well known account regarding lampreys involves Vedius Pollio, who was punished by Augustus for attempting to feed a clumsy slave to the lampreys in his fishpond:

…one of his slaves had broken a crystal cup. Vedius ordered him to be seized and to be put to death in an unusual way. He ordered him to be thrown to the huge lampreys which he had in his fish pond. Who would not think he did this for display? Yet it was out of cruelty. The boy slipped from the captor’s hands and fled to Caesar’s feet asking nothing else other than a different way to die—he did not want to be eaten. Caesar was moved by the novelty of the cruelty and ordered him to be released, all the crystal cups to be broken before his eyes, and the fish pond to be filled in… (Seneca, On Anger, III, 40).