Eel is the common name for any of the various members of the fish order Anguilliformes, which are characterized by an elongated, snake-like body, the absence of pelvic fins, and typically without scales or with the scales embedded in the skin. Eels generally are found in marine environments or, as in the case of the freshwater eels (family Anguillidae), catadromous, spawning in marine environments and with the young eels traveling back into freshwater.

The common name eel also is applied to members of various species in the freshwater family Electrophoridae (electric eels) of the order Gymnotiformes; the marine family Cyematidae (bobtail snipe eels) in the order Saccopharyngiformes; and in the largely freshwater order Synbranchifromes (including the swamp eels in family Synbranchidae and the spiny eels in family Mastacembelidae). However, the "true eels" are placed in order Anguilliformes, which is also known as Apodes.

Eels provide various values for the ecosystem and for humans. The unique adaptations that allow eels to be successful in their environments—primarily for wedging through small openings, while some are adapted to burrowing into soft substrates or living a pelagic existence (Nelson 1994)—also adds to the wonder of nature for humans. Furthermore, many species, particularly freshwater varieties, are also popular as a food fish, particularly in Asia and Europe, where the meat is considered a delicacy (Herbst 2001). Ecologically, eels are important in food chains, acting as predators of fish and such invertebrates as crustaceans and mollusks, and being consumed in its various stages by fish, mammals, birds, and various invertebrates.

The number of rays of the gill webbing ranges from six to 51, though sometimes they are absent altogether. The scales are usually absent, but if present are cycloid and embedded in the skin.

The flat and transparent larva of the eel is called a leptocephalus. A young eel is called an elver. Morphologically, the leptocephali larva of anguilliforms often differ considerably from the adults, to the extent that it is difficult to determine which leptocephali are the young of which adult (Nelson 1994). Most are less than 20 centimeters before they undergo metamorphosis to an adult, although some exceed 50 centimeters (Nelson 1994).

Depending on their species, eels can range in length from ten centimeters to three meters, and weigh up to 65 kilograms or more. The European conger, Conger conger, is the largest of the eel family, reaching three meters in length, and perhaps weighing up to 110 kilograms.

Most eels prefer to dwell in shallow waters or hide at the bottom layer of the ocean, sometimes in holes. These holes are called eel pits. Only the Anguillidae family comes to fresh water to dwell (not to breed). Some eels dwell in deep water (in case of family Synaphobranchidae, this comes to a depth of 4,000 m), or are active swimmers (the family Nemichthyidae—to the depth of 500 m).

The life cycle of the eel was a mystery for a very long time, because larval eels look very different from adult eels, and were thought to be a separate species. 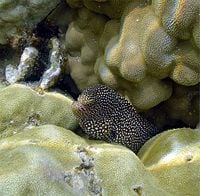 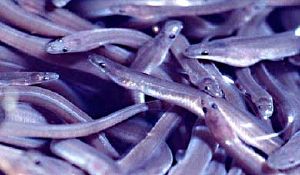 In some classifications the family Cyematidae of bobtail snipe eels is included in the Anguilliformes, but in the FishBase system and in Nelson (1994) that family is included in the order Saccopharyngiformes. The so-called "electric eel" of South America is not a true eel, but is more closely related to the carp.

Freshwater eels are a food fish, particularly popular in Asia and Europe, where their sweet, rich, firm meat is considered a delicacy (Herbst 2001). Japanese cuisine commonly uses both freshwater eels (unagi) and marine eels (conger eel, anago). Unadon is a very popular but rather expensive food. Eels are used in Cantonese and Shanghai cuisine too. The European eel and other freshwater eels are eaten in Europe, the United States, and other places around the world. A traditional East London food is jellied eels. New Zealand longfin eel is a traditional food for Maori in New Zealand. In Italian cuisine, eels from the Comacchio area (a swampy zone along the Adriatic coast) are specially praised along with the freshwater ones of the Bolsena Lake. In northern Germany, smoked eel is praised as a delicatesse.

Eels also are popular among marine aquarists in the United States, particularly the moray eel, which is commonly kept in tropical saltwater aquariums.

Elvers were once eaten by fishermen as a cheap dish, but environmental changes have lead to increased rarity of the fish. They are now considered a delicacy and are priced at up to £700 per kg in the UK.

Eel blood is toxic, however, the toxic protein it contains is destroyed by cooking. The toxin derived from eel blood serum was used by Charles Robert Richet in his Nobel winning research that discovered anaphylaxis (by injecting it into dogs and observing the effect).

There are many historical legends surrounding eels. For instance, some Philippine tribes consider eels to be the souls of the dead. In parts of Europe there is a legend that rubbing the skin with oil of eel will cause a person to see fairies (Herbst 2002). The Egyptians were said to worship eels.