Electric eel is the common name for a South American freshwater fish, Electrophorus electricus, that is characterized by an elongated, cylindrical, snake-like body, absence of dorsal, pelvic, and caudal fins, and the capability of generating strong and weak electric organ discharges, which are used for hunting, self-defense, and electrolocation. Although the electric eel has gills, they are obligatory air breathers, using their gills only as a secondary source of oxygen, with their highly vascularized mouth as their primary source.

Despite its name and strong physical resemblance, the electric eel is not a "true eel," which are various members of the fish order Anguilliformes. The electric eel is placed in the order Gymnotiformes (knifefishes). The common name eel also is applied to members of the marine family Cyematidae (bobtail snipe eels) in the order Saccopharyngiformes and to members of the largely freshwater order Synbranchifromes. Electrophorus electricus is variously placed in the Gymnotidae family within Gymnotiformes (ITIS; Agbayani 2008) or within its own family Electrophoridae (Valasco 2003; Nelson 1994).

As with other entities in nature, electric eels exhibit the principle of bi-level functionality, providing a function for the whole (ecosystem, humans), while also advancing a function for the individual (their own survival, reproduction, development, etc.). Ecologically, as top predators in their aquatic habitats, they help to maintain the balance of prey species in ecosystems. For humans, they rarely serve as a source of food, given that their strong electric shocks can be emitted even hours after death, but they are of substantial interest to researchers, who study their electrical capacity. And these unique animals greatly add to the wonder of nature for humans.

E. electricus is so unusual that it has been reclassified several times. In some taxonomies currently, it is placed in its own family Electrophoridae, for which it is the only representative, while others place it in Gymnotidae (naked-back knifefishes), either part of the genus Gymnotus (G. electricus or G. regius) or as E. electricus alongside the Gymnotus species (Nelson 2006; ITIS; Valasco 2003; Agbayani 2008).

The electric eel can grow up to 2.5 meters (about 8.2 feet) in length and 20 kilograms (about 44 pounds) in weight, making them the largest Gymnotiform (Agbayani 2008; Nelson 2006). Their entire body is covered by a thick, slimy skin, which provides a protective layer, including from their own electric current (Valasco 2003).

Electric eels have a vascularized respiratory organ in their oral cavity (Nelson 2006; Valasco 2003). These fish are obligate air-breathers; rising to the surface every ten minutes or so, the animal will gulp air before returning to the bottom. Nearly 80 percent of the oxygen used by the fish is taken through their mouth, rather than their gills (Valasco 2003).

Electric eels have a well-developed sense of sound, enhanced by a Weberian apparatus that connects the ear to the swim bladder; their eyesight is poor (Valasco 2003). 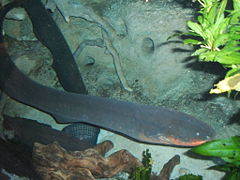 The electric eel has three abdominal pairs of organs that produce electricity. They are the main organ, the hunter's organ, and the sachs’ organ. These organs are made of flattened electrocytes lined up in series and number to about hundreds of thousands (Agbayani 2008). The electrocytes are lined up so the current flows through them and produces an electrical charge. The brain sends a signal through the nervous system to the electric cells. This opens the ion channel, allowing positively-charged sodium to flow through, reversing the charges momentarily. By doing that it creates electricity. The electric eel generates its characteristic electrical pulse in a manner similar to a battery, in which stacked plates produce an electrical charge.

The organs give the electric eel the ability to generate two types of electric organ discharges (EODs), low voltage and high voltage. Low-voltage EODs are about ten volts and are emitted by the Sach's organ at rates of up to 25 Hz, while high-voltage EODS are about 50-fold and emitted by the main and Hunter's organs at peak rates of up to several hundred Hz (Agbayani 2008).

The Sachs organ with its low-voltage discharge is associated with electrolocation (Agbayani 2008). Each of the muscle-like cells or electrocytes, can only produce 0.15V, though working together the organ transmits a signal of about ten voltz in amplitude. These signals are what is thought to be used for communication as well as orientation; useful not only for finding prey, but also in finding and choosing a mate.

The high-voltage discharge from the main organ and Hunter's organ is associated with predatory attacks and defense. Some 5,000 to 6,000 stacked electroplaques in the organs are capable of producing a shock of 500 volts and one ampere of current (500 watts); an EOD of 500 volts was recorded from an individual one meter in length (Agbayani 2008) and Valasco (2003) reports a voltage as high as 650 volts can be produced. The shock could be harmful for an adult human.

The electric eel is unique among the gymnotiforms in having large electric organs capable of producing lethal discharges that allows them to stun prey (Nelson 2006). There are reports of animals producing larger voltages, but the typical output is sufficient to stun or deter virtually any other animal. Juveniles produce smaller voltages (about 100 volts). Electric eels are capable of varying the intensity of the electrical discharge, using lower discharges for "hunting" and higher intensities for stunning prey, or defending themselves. When agitated, it is capable of producing these intermittent electrical shocks over a period of at least an hour without signs of tiring.

The electric eel is found in northeastern portions of South America, including the Guyana and Orinoco River Basins, and the middle and lower Amazon Basin (Valasco 2003).

Electric eels are freshwater fish. They tend to live on muddy bottoms of rivers, swamps, coastal pains, and creeks, often in calm waters (Agbayani 2008; Valasco 2003). They must surface frequently to breath air. Because of this adaptation as an obligatory air breather, they are able to survive well in water that is very poorly oxygenated (Valasco 2003; Agbayani 2008).

The electric eel is an apex predator in its South American range. It stuns the fish it is preying on, and the eels are then able to eat the prey with ease, despite the lack of maxilla teeth, that would make it difficult to eat a fish that is thrashing around (Valasco 2003). Juvenile electris eels feed on invertebrates, while adult eels feed on fish and small mammals; first-borne hatchlings will even prey on other eggs and embryos from later batches (Agbayani 2008).

Electric eels reproduce during the dry season, with eggs deposited in a nest built by the male and made of saliva (Valasco 2003). As many as 17,000 eggs have been documented. Males will vigorously defend the nest and fry. Small juveniles stay near the head of the parent, but very soon after birth the electric organs develop, with fish as small as 15 millimeters having such organ development, which is weak, but will allow orientation (Valasco 2003). When the fish is approximately 40 millimeters long, organs develop that can yield strong electric currents (Valasco 2003). In captivity, females survive between 12 and 22 years, and males between ten and 15 years (Valasco 2003).

Ecologically, electric eels help to maintain the balance of ecosystems by consuming prey species. They themselves avoid predation by their strong electric current, although the young can be eaten because of their weaker electrical currents. While local people in the Amazon will occasionally eat electric eels, they generally are avoided because the electric shocks can even be emitted up to eight hours after death (Valasco 2003).

The species is of substantial interest to researchers, who study its electrical capacities, among other studies (Simon and Massoulié 1997; Denston 1976).