In physics, the space surrounding an electric charge or in the presence of a time-varying magnetic field has a property called an electric field (that can also be equated to electric flux density). This electric field exerts a force on other electrically charged objects. The concept of electric field was introduced by Michael Faraday.

The electric field is a vector field with SI units of newtons per coulomb (N C−1) or, equivalently, volts per meter (V m−1). The strength of the field at a given point is defined as the force that would be exerted on a positive test charge of +1 coulomb placed at that point; the direction of the field is given by the direction of that force. Electric fields contain electrical energy with energy density proportional to the square of the field intensity. The electric field is to charge as gravitational acceleration is to mass and force density is to volume.

where the magnetic flux density is given by

is the Coulomb force. (See the section below).

The electric charge of a macroscopic object is the sum of the electric charges of its constituent particles. Often, the net electric charge is zero, since naturally the number of electrons in every atom is equal to the number of the protons, so their charges cancel out. Situations in which the net charge is non-zero are often referred to as static electricity. Furthermore, even when the net charge is zero, it can be distributed non-uniformly (e.g., due to an external electric field), and then the material is said to be polarized, and the charge related to the polarization is known as bound charge (while the excess charge brought from outside is called free charge). An ordered motion of charged particles in a particular direction (in metals, these are the electrons) is known as electric current. The discrete nature of electric charge was proposed by Michael Faraday in his electrolysis experiments, then directly demonstrated by Robert Millikan in his oil-drop experiment.

Formally, a measure of charge should be a multiple of the elementary charge e (charge is quantized), but since it is an average, macroscopic quantity, many orders of magnitude larger than a single elementary charge, it can effectively take on any real value. Furthermore, in some contexts it is meaningful to speak of fractions of a charge; e.g. in the charging of a capacitor.

If the charged particle can be considered a point charge, the electric field is defined as the force it experiences per unit charge:

is the electric field wherein the particle is located

Taken literally, this equation only defines the electric field at the places where there are stationary charges present to experience it. Furthermore, the force exerted by another charge

will alter the source distribution, which means the electric field in the presence of

differs from itself in the absence of

This allows the electric field to be dependent on the source distribution alone.

The electric field surrounding a point charge is given by Coulomb's law:

Q is the charge of the particle creating the electric field,
r is the distance from the particle with charge Q to the E-field evaluation point,

is the Unit vector pointing from the particle with charge Q to the E-field evaluation point,

is the vacuum permittivity.

Coulomb's law is actually a special case of Gauss's Law, a more fundamental description of the relationship between the distribution of electric charge in space and the resulting electric field. Gauss's law is one of Maxwell's equations, a set of four laws governing electromagnetics.

which yields Faraday's law of induction,

indicates the curl of the electric field,

represents the vector rate of decrease of magnetic field with time. 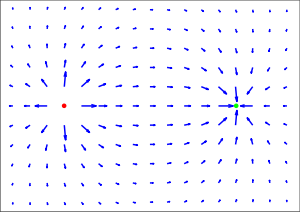 Illustration of the electric field surrounding a positive (red) and a negative (green) charge.

According to equation (1) above, electric field is dependent on position. The electric field due to any single charge falls off as the square of the distance from that charge.

Electric fields follow the superposition principle. If more than one charge is present, the total electric field at any point is equal to the vector sum of the respective electric fields that each object would create in the absence of the others.

If this principle is extended to an infinite number of infinitesimally small elements of charge, the following formula results:

is the charge density, or the amount of charge per unit volume.

The electric field at a point is equal to the negative gradient of the electric potential there. In symbols,

is the scalar field representing the electric potential at a given point.

If several spatially distributed charges generate such an electric potential, e.g. in a solid, an electric field gradient may also be defined.

of a material, which may differ from the permittivity of free space

, the electric displacement field is:

Energy in the electric field

is the permittivity of the medium in which the field exists

is the electric field vector.

is the differential volume element.

Parallels between electrostatics and gravity

Coulomb's law, which describes the interaction of electric charges:

is similar to the Newtonian gravitation law:

This suggests similarities between the electric field

and the gravitational field

Similarities between electrostatic and gravitational forces:

Differences between electrostatic and gravitational forces: