A 750-kΩ resistor, as identified by its electronic color code. An ohmmeter may be used to verify this value.

The mathematical equation of Ohm's law may be written as:

The ratio of voltage divided by electric current is also called the chordal resistance.

Resistance of a conductor

As long as the current density is totally uniform, the DC resistance R of a conductor of regular cross-section can be computed as

ℓ is the length of the conductor, measured in meters

A is the cross-sectional area, measured in square meters

For practical reasons, almost any connections to a real conductor will almost certainly mean the current density is not totally uniform. However, this formula still provides a good approximation for long thin conductors such as wires.

If a wire conducts high-frequency alternating current then the effective cross sectional area of the wire is reduced because of the skin effect. This causes the wire resistance to increase at a rate of 10dB/decade for wire radius much greater than skin depth.

In a conductor close to others, the actual resistance is higher than that predicted by the skin effect because of the proximity effect.

A metal consists of a lattice of atoms, each with a shell of electrons. This can also be known as a positive ionic lattice. The outer electrons are free to dissociate from their parent atoms and travel through the lattice, creating a 'sea' of electrons, making the metal a conductor. When an electrical potential difference (a voltage) is applied across the metal, the electrons drift from one end of the conductor to the other under the influence of the electric field.

Near room temperatures, the thermal motion of ions is the primary source of scattering of electrons (due to destructive interference of free electron wave on non-correlating potentials of ions), and is thus the prime cause of metal resistance. Imperfections of lattice also contribute into resistance, although their contribution in pure metals is negligible.

In semiconductors and insulators

In electrolytes, electrical conduction happens not by band electrons or holes, but by full atomic species (ions) traveling, each carrying an electrical charge. The resistivity of ionic liquids varies tremendously by the salt concentration—while distilled water is almost an insulator, salt water is a very efficient electrical conductor. In biological membranes, currents are carried by ionic salts. Small holes in the membranes, called ion channels, are selective to specific ions and determine the membrane resistance. 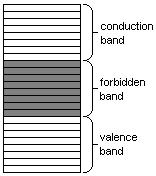 Electron energy levels in an insulator.

Quantum mechanics states that the energy of an electron in an atom cannot be any arbitrary value. Rather, there are fixed energy levels which the electrons can occupy, and values in between these levels are impossible. The energy levels are grouped into two bands: the valence band and the conduction band (the latter is generally above the former). Electrons in the conduction band may move freely throughout the substance in the presence of an electrical field.

In insulators and semiconductors, the atoms in the substance influence each other so that between the valence band and the conduction band there exists a forbidden band of energy levels, which the electrons cannot occupy. In order for a current to flow, a relatively large amount of energy must be furnished to an electron for it to leap across this forbidden gap and into the conduction band. Thus, even large voltages can yield relatively small currents.

When resistance may depend on voltage and current, differential resistance, incremental resistance or slope resistance is defined as the slope of the V-I graph at a particular point, thus:

This quantity is sometimes called simply resistance, although the two definitions are equivalent only for an ohmic component such as an ideal resistor. For example, a diode is a circuit element for which the resistance depends on the applied voltage or current.

where Rimp is the temperature independent electrical resistivity due to impurities, and a, b, and c are coefficients which depend upon the metal's properties. This rule can be seen as the motivation to Heike Kamerlingh Onnes's experiments that lead in 1911 to the discovery of superconductivity. For details see History of superconductivity.

The electric resistance of a typical intrinsic (non doped) semiconductor decreases exponentially with the temperature:

Extrinsic (doped) semiconductors have a far more complicated temperature profile. As temperature increases starting from absolute zero they first decrease steeply in resistance as the carriers leave the donors or acceptors. After most of the donors or acceptors have lost their carriers the resistance starts to increase again slightly due to the reducing mobility of carriers (much as in a metal). At higher temperatures it will behave like intrinsic semiconductors as the carriers from the donors/acceptors become insignificant compared to the thermally generated carriers.

The electric resistance of electrolytes and insulators is highly nonlinear, and case by case dependent, therefore no generalized equations are given.

An instrument for measuring resistance is called a resistance meter or ohmmeter. Simple ohmmeters cannot measure low resistances accurately because the resistance of their measuring leads causes a voltage drop that interferes with the measurement, so more accurate devices use four-terminal sensing.