Georg Simon Ohm was a German physicist who clarified the fundamental relationships between electric current, voltage, and resistance. This relationship, known as Ohm's law, represents the true beginning of electrical circuit analysis.

Ohm offers a good example of the working of science through his experimental investigation of electrical circuits, his transfer of concepts from one area of physics (the study of heat) to another area (the study of electricity), and his use of mathematics to quantify the relation between the separately identified properties of current, voltage, and resistance. His integration of the three properties into a single formula, which became known as Ohm's law, served as a huge stepping stone for all the subsequent advances involving electrical circuits, ranging from electric lights to radios and computers.

Ohm was born on March 16, 1789 to Johann Wolfgang Ohm, a locksmith and Maria Elizabeth Beck, the daughter of a tailor in Erlangen, Bavaria. Although his parents had not been formally educated, Ohm's father was a respected man who had educated himself to a high level and gave his sons an excellent education through his own teachings. Some of Ohm's brothers and sisters died in their childhood and only three, including Georg Simon, survived. The other two survivors were his younger brother Martin (who later became a well-known mathematician), and his sister Elizabeth Barbara. His mother died when he was ten.

The boys' father taught them from their early childhood, bringing them to a high standard in mathematics, physics, chemistry and philosophy even as he hoped they would follow in his footsteps as a locksmith. Georg Simon attended Erlangen Gymnasium from age 11 to age 15 where he received little in the area of scientific training, which sharply contrasted with the inspired instruction that both the boys had received from their father. The progress of the Ohm brothers in science and mathematics made them bear a resemblance to the scientifically accomplished Bernoulli family, as noted by the professor at the University of Erlangen, Karl von Langsdorf. Langsdorf's enthusiasm inspired Ohm's father to relinquish his desire to have the boys take up his trade.

In 1805, at age 15, Ohm entered the University of Erlangen. Rather than concentrate on his studies he spent much time dancing, ice skating, and playing billiards. Ohm's father, angry that his son was wasting the educational opportunity, sent Ohm to Switzerland where, in September 1806, he took up a post as a mathematics teacher in a school in the Institute of Gottstadt near Nydau, in the canton of Berne.

Karl Christian von Langsdorf left the University of Erlangen in early 1809 to take up a post in the University of Heidelberg, and Ohm would have liked to have gone with him to restart his mathematical studies. Langsdorf, however, advised Ohm to continue with his studies of mathematics on his own, advising Ohm to read the works of Leonhard Euler, Pierre-Simon Laplace and Sylvestre François Lacroix. Rather reluctantly, Ohm took this advice but he left his teaching post in Gottstadt in March 1809 to become a private tutor in Neuchâtel. For two years he carried out his duties as a tutor while he followed Langsdorf's advice and continued his private study of mathematics. In April 1811 he returned to the University of Erlangen.

His private studies had stood him in good stead, for he earned a doctorate from Erlangen on October 25, 1811, and immediately joined the staff as a Privatdocent. After three semesters Ohm gave up his university post. In 1813, the Bavarian government offered him a post as a teacher of mathematics and physics at the comparatively poor quality Realschule of Bamberg. Feeling unhappy with his job, Ohm devoted his spare time to writing an elementary book on geometry as a way to prove his true ability. The school was then closed down in February 1816.

Ohm sent his manuscript on geometry to King Wilhelm III of Prussia upon its completion. The work must have impressed the king, because Ohm was subsequently offered a position at a Jesuit gymnasium in Cologne on September 11, 1817. Thanks to the school's reputation for science education, Ohm found himself required to teach physics as well as mathematics. Luckily, the physics lab was well-equipped, so Ohm devoted himself to experiments in physics. Being the son of a locksmith, Ohm had some practical experience with mechanical equipment. It was here that he developed his theory of the relationship between electromotive force, resistance and electric current.

In 1826, having obtained a leave of absence from the gymnasium in Cologne, Ohm arranged for the publication of his theories in Berlin. This work appeared in its most complete form in 1927 as a book entitled "The Galvanic Circuit Mathematically Treated." In it, he applied, by analogy, the same treatment to the flow of electricity as Joseph Fourier had in his groundbreaking study of heat flow. Ohm's work was misunderstood and poorly received, and Ohm relinquished his position at the gymnasium, becoming practically unemployed until he secured a professorship at the Polytechnic School of Nuremberg in 1833. During the intervening years, Ohm did not have access to a laboratory, and his researches came to a virtual halt.

Gradually, however, his explanations regarding the voltaic circuit picked up converts, and his work finally won the admiration of the most illustrious scientists of the time. In 1841, he received the Copley Medal of the Royal Society of London. In its notice of the award, the society praised Ohm's work.

The light which these investigations has thrown on the theory of current electricity is very considerable....Had the works of Ohm been earlier known, and their value recognised, the industry of experimentalists would have been better rewarded.

Ohm was elected a foreign member of the Royal Society in 1842. He continued teaching, and devoted the remainder of his career to developing a molecular theory of electricity. He published one volume of the results of his work in 1849 under the title, Contributions to Molecular Physics, in which he included an exposition of geometry using a system of oblique-angled coordinates.

In 1849 he assumed the post of conservator of the Physical Collection at Munich. This left him little time for research, although he managed to publish a memoir on interference in uniaxal crystals.

In 1852 he again assumed a teaching post, this time at the high school in Munich. This teaching post inspired him to write a physics text book, which was published in 1854. His health, however, was not strong enough to sustain his exertions, and, after a short period of declining health, he suffered an apoplectic attack and died on July 7, 1854.

The discovery of Ohm's law

In his first paper published in 1825, Ohm examines the decrease in the electromagnetic force produced by a wire as the length of the wire increased. The paper deduced mathematical relationships based purely on the experimental evidence that Ohm had tabulated.

In two important papers in 1826, Ohm gave a mathematical description of conduction in electrical circuits modeled on Joseph Fourier's study of heat conduction. These papers continue Ohm's deduction of results from experimental evidence and, particularly in the second, he was able to propose laws which went a long way to explaining results of others working on galvanic electricity. The second paper certainly is the first step in a comprehensive theory which Ohm was able to give in his famous book published in the following year.

What is now known as Ohm's law appeared in the famous book Die galvanische Kette, mathematisch bearbeitet (“The Galvanic Circuit Investigated Mathematically,” 1827) in which he gave his complete theory of electricity. The book begins with the mathematical background necessary for an understanding of the rest of the work. While his work later greatly influenced the theory and applications of current electricity, it was coldly received at that time. It is interesting that Ohm presents his theory as one of contiguous action, a theory which opposed the concept of action at a distance. Ohm believed that the communication of electricity occurred between "contiguous particles" which is the term Ohm himself uses. 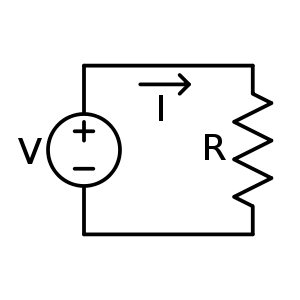 An electric battery will produce a fixed amount of electromotive force, or voltage, in a circuit. The electrical current (quantity of electric charge that moves past a particular point in the circuit in a unit of time) will then be resisted only by the wires and other parts of the circuit that connect the poles of the battery. The current will then only depend on the resistance offered by the connecting wire.

where I is the current, V is the potential difference, and R is a constant called the resistance. The potential difference is also known as the voltage drop, and is sometimes denoted by E or U instead of V. This law is usually valid over a large range of values of current and voltage, but it breaks down if conditions (such as temperature) are changed excessively.

In the case where the circuit is broken, the resistance is infinite, and the current drops to zero, as the above formula demonstrates. In the case where a perfect conductor connects the poles of a battery and offers no resistance, this formula would seem to yield an infinite current, but the battery itself has an internal resistance that prevents this.

The voltage may be thought of as the pressure that pushes the current through the wire. Naturally, in places where there is greater resistance, a greater pressure will be needed in order that the current remain constant at all points in the conducting wire. Therefore, across a stretch of wire with greater resistance, the voltage drop must be greater than for one with less resistance. The total voltage provided by the battery is divided up according to the varying resistances in each segment of the connecting circuit, in order to keep the current flow the same at all points through the conducting wire.

The unit of current is the ampere; that of potential difference is the volt; and that of resistance is the ohm, equal to one volt per ampere. Georg Ohm presented a slightly more complex equation than the above one, to explain his experimental results. The above equation could not exist until the ohm, a unit of resistance, was defined (1861, 1864).

His writings were numerous. The most important was his pamphlet published in Berlin in 1827, with the title Die galvanische Kette mathematisch bearbeitet. This work, the germ of which had appeared during the two preceding years in the journals of Schweigger and Poggendorff, has exerted an important influence on the development of the theory and applications of electric current. Ohm's name has been incorporated in the terminology of electrical science in Ohm's law (which he first published in Die galvanische Kette...), the proportionality of current and voltage in a resistor, and adopted as the SI unit of resistance, the ohm (symbol Ω).

Retrieved from https://www.newworldencyclopedia.org/p/index.php?title=Georg_Ohm&oldid=1004952
Categories:
Hidden category:
This page was last edited on 26 May 2017, at 20:52.
Content is available under Creative Commons Attribution/Share-Alike License; additional terms may apply. See Terms of Use for details.