Heinrich Rudolf Hertz (February 22, 1857 - January 1, 1894) was a German physicist who was the first to satisfactorily demonstrate the existence of electromagnetic radiation waves by building an apparatus to produce and detect them. His discovery was a key step on the path to the use of radio waves in communications and broadcasting and the use of all the many invisible octaves of the electromagnetic spectrum to the service of humanity.

As a pioneer opening the window onto the invisible but very real world of electromagnetism, Hertz had no foundation for even imagining the multitude of uses to which these electromagnetic waves could be put. That task would fall to others benefiting from his discovery.

Heinrich Rudolf Hertz was born in Hamburg, Germany, on February 22, 1857, the oldest of the five children of Gustav Ferdinand Hertz and Anna Elisabeth Pfefferkorn. Hertz's paternal grandfather converted from Judaism to Lutheranism and married into a Lutheran family. His father was an attorney who belonged to the Hamburg senate, his mother was the daughter of a doctor. Both Hertz's father and mother were Lutheran.

In his youth, Hertz showed an advanced aptitude for mathematics, and took extra geometry lessons on Sundays. He more often than not ranked first in his class. He also had a strong affinity for languages, quickly learning Latin, Greek, Arabic, and Sanskrit. At the same time, he showed a facility for the practical in drawing, sculpture, and handicraft. To combine these interests, he at first pursued a career in engineering construction.

In 1875, Hertz spent a year in a construction department in Frankfort. He then attended the polytechnic in Dresden, and was particularly fond of the mathematical lectures given there, but also took a keen interest in history and philosophy. After only a semester in Dresden, he joined the military and spent one year on active duty. In 1877, he enrolled at the polytechnic in Munich, changing his major to physics. During this time, encouraged by his teachers, he studied the original works of famous physicists such as Isaac Newton, Gottfried Leibniz, Joseph Lagrange, and Pierre-Simon Laplace.

Hertz was dissatisfied with the level of physics education in Munich, so he moved to Berlin. There, he studied in the laboratory of Hermann von Helmholtz and won a prize for the investigation of inertia in electric currents. Hertz was able to show that the inertia of a current was small or nonexistent; this result dovetailed with theoretical research Helmholtz was doing on electromagnetic theory. During this period, he attended lectures by Gustav Kirchhoff on mechanics. Although he would become famous for his electrical researches, Hertz's works on mechanics were also substantial.

In 1879, he considered, but turned down, a proposal by Helmholtz to determine the existence of an electric current in a dielectric, the insulating material between two conductors used to store electric charge. James Clerk Maxwell had predicted the existence of such currents. But Hertz convinced Helmholtz that the study would take longer than it was worth.

Hertz obtained his Ph.D. in 1880, and continued to work in Helmholtz's laboratory until 1883. As an assistant to Helmholtz in Berlin, Hertz submitted memoirs on the evaporation of liquids, a new kind of hygrometer, and a graphical means of determining the properties of moist air.[1]

He also published articles on what was to become known as the field of contact mechanics. Hertz analyzed the mechanical deformations of two colliding elastic spheres, and from this arrived at a new definition of hardness he hoped would be of some use to mineralogists.

In 1886, Hertz began a series of experiments to clarify some of the theoretical predictions of Maxwell's electromagnetic theory. At this time, he discovered the utility of a spark gap, and realized that its regular effects would enable him to investigate the questions left unanswered when he turned down Helmholtz's research idea. While undertaking these experiments, he noticed what was at first an unwanted side effect: That a spark gap discharged more easily when another spark gap was activated. Hertz traced this effect to the presence of ultraviolet light waves generated from the second spark gap, which, when they reached the first, promoted current flow, thus making the discharge easier. After solving this problem, Hertz returned to the original purpose of his research. This phenomenon was later called the photoelectric effect, and became the topic of a famous paper by Albert Einstein which won him a Nobel Prize.

Hertz wanted to show that the speed of electromagnetic waves was finite in air and in a vacuum, thus concluding that air and dielectric insulators act in the same manner. He at first noticed that he obtained a much greater reaction at his second spark gap than would be allowed by the normal laws of the propagation of force, which generally predict a diminished action with distance. From this, he realized that he was producing electromagnetic waves, which were retaining their power of action over longer distances. Not only was he able to produce and detect these waves, but he also determined their properties, such as reflection and refraction. His results, which he published in 1887, were quickly accepted by the scientific community. When publicized by others, such as physicists Oliver Lodge and George Fitzgerald, who were working in the same field, his results soon launched an all-out effort to use the phenomena for the purposes of communication, resulting in the invention of radio at the end of the next decade. One of Hertz's students, Philipp Lenard, continued Hertz's electrical researches into cathode rays.

After his work on electromagnetic waves, Hertz turned to one of his original fields of interest, mechanics. He wrote an important work, The Principles of Mechanics Presented in a New Form, that attempted to remove ambiguity and confusion in the various presentations up to that time.

In 1892, an infection was diagnosed (after a bout of severe migraines) and Hertz underwent some operations to correct the illness. He died of blood poisoning at the age of 36 in Bonn, Germany.

In 1887, Hertz made observations of the photoelectric effect and of the production and reception of electromagnetic waves, which he published in the journal Annalen der Physik. His receiver was a coil with a voltage difference maintained across a spark gap, which would issue a spark in the presence of electromagnetic waves (which were produced by a transmitter spark coil). He placed the apparatus with the receiving spark gap in a darkened box in order to see the spark better and observed instead, that the maximum spark length was less when in the box. Putting a glass panel between the source of the waves and the receiving spark gap also caused a weakening of the spark.

When the intervening glass panel was removed, the spark length would increase; but if instead of glass a quartz panel were put in the path of the waves, Hertz observed no decrease in spark length. Knowing already that a spark is accompanied by the production of ultraviolet light, Hertz concluded that this radiation was responsible for the increase in conductivity of the second spark gap, and submitted a memoir on the subject. He did not investigate this effect further, since it was not the main focus of his research, nor did he make any attempt at explaining how the observed phenomenon was brought about. His experiments did, however, generate a tremendous amount of interest among scientists. 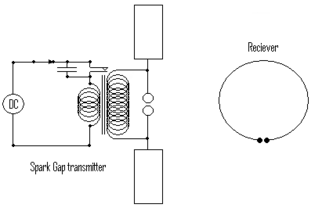 In 1887, Hertz experimented with radio waves in his laboratory. Hertz used a Ruhmkorff coil-driven spark gap and one meter wire pair as a radiator. Metallic spheres were present at the ends to adjust the electrical properties of the circuit. His receiver was not much more than a curved wire with a spark gap. 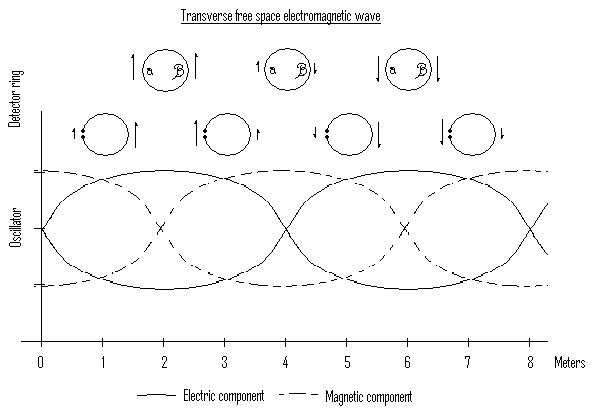 Through experimentation, he proved that electromagnetic waves can travel over some distance through the air. This had been predicted by James Clerk Maxwell and Michael Faraday. With his apparatus configuration, the electric and magnetic fields would radiate away from the wires as waves. Hertz had positioned the oscillator about 12 meters from a zinc reflecting plate to produce standing waves, similar to the way a musical note is produced by sound waves reverberating in a tube of a set length. Each wave was about four meters long. Using the ring detector, he recorded how the magnitude and direction of the waves varied. Hertz failed, however, to conclusively measure the speed of the waves. At first he thought the speed was infinite; another series of measurements showed a large discrepancy between the velocity of waves in a wire and through air. Later investigators resolved these differences, and showed that the waves move at the speed of light.

Like many of the scientists of his time, Hertz did not understand the wide-ranging potential applications of his production and detection of electromagnetic radiation. His original purpose was to demonstrate certain principles contained in Maxwell's theory. Had not others, such as Lodge and Fitzgerald, been working in the same field, his work and its applications might not have been well understood.

Of his discovery, he said:

It's of no use whatsoever … this is just an experiment that proves Maestro Maxwell was right—we just have these mysterious electromagnetic waves that we cannot see with the naked eye. But they are there.[2]

Asked about the ramifications of his discoveries, Hertz replied, "Nothing, I guess." His discoveries would later be more fully understood by others and be part of the new "wireless age."

It took more practical people like Nikola Tesla and Guglielmo Marconi to understand the practical advantage of using the waves to send messages over long distances. Hertz did not live long enough to see the blossoming of the new technology based on his discoveries.