Various types of capacitors. Each capacitor includes a pair of conducting plates separated by a dielectric.

A dielectric, or electrical insulator, is a material that is highly resistant to the flow of an electric current. Dielectric materials can be solids, liquids, or gases. In addition, a vacuum is an excellent dielectric.

An important application of dielectrics is to separate the plates of capacitors. A capacitor's ability to store electric charge depends on the dielectric that separates its plates.

The relative dielectric constant is represented as εr (or sometimes

, K, or Dk). Mathematicallly, it is defined as:

Permittivity is a physical quantity that describes how an electric field affects and is affected by a dielectric medium, and is determined by the ability of a material to polarize in response to the field, and thereby reduce the field inside the material. Thus, permittivity relates to a material's ability to transmit (or "permit") an electric field.

It is directly related to electric susceptibility. For example, in a capacitor, an increased permittivity allows the same charge to be stored with a smaller electric field (and thus a smaller voltage), leading to an increased capacitance.

The term dielectric strength may be defined as follows:

The theoretical dielectric strength of a material is an intrinsic property of the bulk material and is dependent on the configuration of the material or the electrodes with which the field is applied. At breakdown, the electric field frees bound electrons. If the applied electric field is sufficiently high, free electrons may become accelerated to velocities that can liberate additional electrons during collisions with neutral atoms or molecules in a process called avalanche breakdown. Breakdown occurs quite abruptly (typically in nanoseconds), resulting in the formation of an electrically conductive path and a disruptive discharge through the material. For solid materials, a breakdown event severely degrades, or even destroys, its insulating capability. 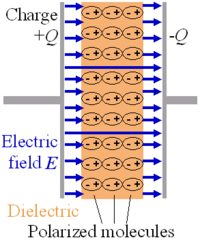 The electrons in the molecules shift toward the positively charged left plate. The molecules then create a leftward electric field that partially cancels the field created by the plates. (The air gap is shown for clarity; in real capacitor, the dielectric is usually in direct contact with the plates.)

Putting a dielectric material between the plates in a parallel plate capacitor causes an increase in the capacitance in proportion to k, the relative permittivity of the material:

is the permittivity of free space, A is the area covered by the capacitors, and d is the distance between the plates.

The use of a dielectric in a capacitor presents several advantages. The simplest of these is that the conducting plates can be placed very close to one another without risk of contact. Also, if subjected to a very high electric field, any substance will ionize and become a conductor. Dielectrics are more resistant to ionization than dry air, so a capacitor containing a dielectric can be subjected to a higher operating voltage. Layers of dielectric are commonly incorporated in manufactured capacitors to provide higher capacitance in a smaller space than capacitors using only air or a vacuum between their plates, and the term dielectric refers to this application as well as the insulation used in power and RF cables.

Dielectric materials can be solids, liquids, or gases. In addition, a high vacuum can also be a useful, lossless dielectric even though its relative dielectric constant is only unity.

Retrieved from https://www.newworldencyclopedia.org/p/index.php?title=Dielectric&oldid=1074478
Categories:
Hidden category:
This page was last edited on 29 July 2022, at 03:36.
Content is available under Creative Commons Attribution/Share-Alike License; additional terms may apply. See Terms of Use for details.