Space-filling model of a polyethylene chain

Polyethylene (PE), also known as polyethene (IUPAC name) or polythene, is a major group of thermoplastic polymers, produced by the polymerization of ethylene. Depending on the polymerization process used, various types of polyethylene with differing properties can be obtained. They are categorized based on their density, molecular weight, and branching structure. 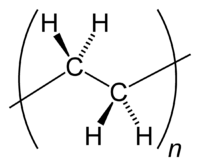 The repeating unit of polyethylene, showing its stereochemistry 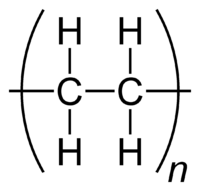 A simpler way of representing the repeating unit. Note, however, that the C−H bond angles are not 90° as this diagram suggests, but are approximately 110° each.

Under certain circumstances, it is useful to use a structure–based nomenclature. In such cases, the IUPAC recommends poly(methylene). The difference is due to the "opening up" of the monomer's double bond upon polymerization.

In the polymer industry, the name is sometimes shortened to PE, analogous to the contraction of polypropylene to PP and polystyrene to PS.

Polyethylene was first synthesized by the German chemist Hans von Pechmann, who prepared it accidentally in 1898, while heating diazomethane. When his colleagues Eugen Bamberger and Friedrich Tschirner characterized the white, waxy substance he had obtained, they recognized that it contained long -CH2- chains and called it polymethylene.

The first industrially practical synthesis of polyethylene was discovered (again by accident) in 1933, by Eric Fawcett and Reginald Gibson at the Imperial Chemical Industries (ICI) works in Northwich, England.[2] Upon applying extremely high pressure (several hundred atmospheres) to a mixture of ethylene and benzaldehyde, they too produced a white waxy material. Because the reaction had been initiated by trace oxygen contamination in their apparatus, the experiment was at first difficult to reproduce. It was not until 1935, that another ICI chemist, Michael Perrin, developed this accident into a reproducible, high-pressure synthesis for polyethylene. That process became the basis for industrial production of LDPE, beginning in 1939.

Subsequent landmarks in polyethylene synthesis have revolved around the development of several types of catalyst that promote ethylene polymerization at milder temperatures and pressures. The first of these was a chromium trioxide based catalyst discovered in 1951, by Robert Banks and J. Paul Hogan at Phillips Petroleum. In 1953, German chemist Karl Ziegler developed a catalytic system based on titanium halides and organoaluminum compounds that worked at even milder conditions than the Phillips catalyst. The Phillips catalyst is less expensive and easier to work with, however, and both methods are used in industrial practice.

By the end of the 1950s, both the Phillips and Ziegler type catalysts were being used for the production of HDPE. Phillips' initially had difficulties producing a HDPE product of uniform quality, and filled warehouses with off-specification plastic. However, financial ruin was unexpectedly averted in 1957, when the hula hoop, a toy consisting of a circular polyethylene tube, became a fad among youth in the United States.

A third type of catalytic system, one based on metallocenes, was discovered in 1976, in Germany, by Walter Kaminsky and Hansjörg Sinn. The Ziegler and metallocene catalyst families have since proven to be very flexible at co-polymerizing ethylene with other olefins and have become the basis for the wide range of polyethylene resins available today, including very low density polyethylene and linear low density polyethylene. Such resins, in the form of fibers like Dyneema, have (as of 2005) begun to replace aramids in many high-strength applications.

Until recently, the metallocenes were the most active single-site catalysts for ethylene polymerization known. (New catalysts are typically compared to zirconocene dichloride.) Much effort is currently being exerted on developing new single-site ("post-metallocene") catalysts, which may allow greater tuning of the polymer structure than is possible with metallocenes. Recently, work by Fujita at the Mitsui corporation (among others) has demonstrated that certain salicylaldimine complexes of Group 4 metals show substantially higher activity than the metallocenes.

Polyethylene is produced by the polymerization of ethylene (ethene), which is the building block called a monomer. Ethylene has the chemical formula C2H4. Each molecule of ethylene consists of two methylene (CH2) groups connected by a double bond. Below are two different representations of the structure of ethylene.

As noted earlier, the various types of polyethylenes are classified based mainly on their molecular weight, density, and branching. These categories are named here, and their properties and uses are given below (see Properties and uses).

Most LDPE, MDPE, and HDPE grades have excellent chemical resistance and do not dissolve at room temperature because of the crystallinity. Polyethylene (other than cross-linked polyethylene) usually can be dissolved at elevated temperatures in aromatic hydrocarbons, such as toluene or xylene, or chlorinated solvents, such as trichloroethane or trichlorobenzene.

Because of its outstanding toughness, cut, wear and excellent chemical resistance, UHMWPE is used in a wide diversity of applications. These include can and bottle handling machine parts, moving parts on weaving machines, bearings, gears, artificial joints, edge protection on ice rinks, butchers' chopping boards. It competes with aramid in bulletproof vests, as Spectra (or Dyneema) fibers.

HDPE is used in products and packaging such as milk jugs, detergent bottles, margarine tubs, garbage containers and water pipes. HDPE is also widely used in the production of fireworks. In tubes of varying length (depending on the size of the ordnance), HDPE is used as a replacement for the supplied cardboard mortar tubes for two primary reasons. One, it is much safer than the supplied cardboard tubes because if a shell were to malfunction and explode inside ("flower pot") an HDPE tube, the tube will not shatter. The second reason is that they are reusable allowing designers to create multiple shot mortar racks. Pyrotechnicians discourage the use of PVC tubing in mortar tubes because it tends to shatter, sending shards of plastic at possible spectators, and will not show up in X-rays.

PEX is a medium- to high-density polyethylene containing cross-link bonds introduced into the polymer structure. The cross-linking changes the thermoplast into an elastomer. The high-temperature properties of the polymer are improved, its flow is reduced and its chemical resistance is enhanced. PEX is used in some potable water plumbing systems, as tubes made of the material can be expanded to fit over a metal nipple, and it will slowly return to its original shape, forming a permanent, water-tight connection.

LLDPE is defined by a density range of 0.915-0.925 g/cm3. It is a substantially linear polymer, with significant numbers of short branches, commonly made by copolymerization of ethylene with short-chain alpha-olefins, mentioned above. LLDPE has higher tensile strength than LDPE. Exhibits higher impact and puncture resistance than LDPE. Lower thickness (gauge) films can be blown compared to LDPE, with better environmental stress cracking resistance compared to LDPE but is not as easy to process.

Although various applications are available, LLDPE is used predominantly in packaging film, due to its toughness, flexibility, and relative transparency. It is also used for cable covering, toys, lids, buckets, and containers.

LDPE is defined by a density range of 0.910-0.940 g/cm3. It has a high degree of short and long chain branching, which means that the chains do not pack into the crystal structure as well. It has, therefore, less strong intermolecular forces as the instantaneous-dipole induced-dipole attraction is less. This results in a lower tensile strength and increased ductility. LDPE is created by free radical polymerization. The high degree of branches with long chains gives molten LDPE unique and desirable flow properties. LDPE is used for both rigid containers and plastic film applications such as plastic bags and film wrap.

VLDPE is defined by a density range of 0.880-0.915 g/cm3. It is a substantially linear polymer, with high levels of short chain branches, commonly made by copolymerization of ethylene with short-chain alpha-olefins. VLDPE is most commonly produced using metallocene catalysts due to the greater co-monomer incorporation exhibited by these catalysts. Different grades of VLDPE are used for hose and tubing, ice and frozen food bags, food packaging and stretch wrap, as well as impact modifiers when blended with other polymers.

Recently, much research activity has focused on the nature and distribution of long chain branches in polyethylene. In HDPE, a relatively small number of these branches, perhaps 1 in 100 or 1,000 branches per backbone carbon, can significantly affect the rheological properties of the polymer.

In addition to copolymerization with alpha-olefins (as noted for producing LLDPE and VLDPE), ethylene can also be copolymerized with a wide range of other monomers. Common examples include: