Piezoelectricity is the ability of some materials (notably crystals and certain ceramics) to generate an electric potential[1] in response to applied mechanical stress. This may take the form of a separation of electric charge across the crystal lattice. If the material is not short-circuited, the applied charge induces a voltage across the material. The word is derived from the Greek piezein, which means to squeeze or press.

The pyroelectric effect, where a material generates an electric potential in response to a temperature change, was studied by Carolus Linnaeus and Franz Aepinus in the mid-eighteenth century. Drawing on this knowledge, both René Just Haüy and Antoine César Becquerel posited a relationship between mechanical stress and electric charge; however, experiments by both proved inconclusive.

The first demonstration of the direct piezoelectric effect was in 1880, by the brothers Pierre Curie and Jacques Curie. They combined their knowledge of pyroelectricity with their understanding of the underlying crystal structures that gave rise to pyroelectricity to predict crystal behavior, and demonstrated the effect using crystals of tourmaline, quartz, topaz, cane sugar, and Rochelle salt (sodium potassium tartrate tetrahydrate). Quartz and Rochelle salt exhibited the most piezoelectricity.

For the next few decades, piezoelectricity remained something of a laboratory curiosity. More work was done to explore and define the crystal structures that exhibited piezoelectricity. This culminated in 1910, with the publication of Woldemar Voigt's Lehrbuch der Kristallphysik (textbook on crystal physics), which described the 20 natural crystal classes capable of piezoelectricity, and rigorously defined the piezoelectric constants using tensor analysis.

World War I and post-war

The first practical application for piezoelectric devices was sonar, first developed during World War I. In France in 1917, Paul Langevin and his coworkers developed an ultrasonic submarine detector. The detector consisted of a transducer, made of thin quartz crystals carefully glued between two steel plates, and a hydrophone to detect the returned echo. By emitting a high-frequency chirp from the transducer, and measuring the amount of time it takes to hear an echo from the sound waves bouncing off an object, one can calculate the distance to that object.

The use of piezoelectricity in sonar, and the success of that project, created intense development interest in piezoelectric devices. Over the next few decades, new piezoelectric materials and new applications for those materials were explored and developed.

Piezoelectric devices found homes in many fields. Ceramic phonograph cartridges simplified player design, were cheap and accurate, and made record players cheaper to maintain and easier to build. The development of the ultrasonic transducer allowed for easy measurement of viscosity and elasticity in fluids and solids, resulting in huge advances in materials research. Ultrasonic time-domain reflectometers (which send an ultrasonic pulse through a material and measure reflections from discontinuities) could find flaws inside cast metal and stone objects, improving structural safety.

In contrast, Japanese manufacturers shared their information, quickly overcoming technical and manufacturing challenges and creating new markets. Japanese efforts in materials research created piezoceramic materials competitive to the U.S. materials, but free of expensive patent restrictions. Major Japanese piezoelectric developments include new designs of piezoceramic filters, used in radios and televisions, piezo buzzers and audio transducers that could be connected directly into electronic circuits, and the piezoelectric igniter which generates sparks for small engine ignition systems (and gas-grill lighters) by compressing a ceramic disc. Ultrasonic transducers that could transmit sound waves through air had existed for quite some time, but first saw major commercial use in early television remote controls. These transducers now are mounted on several car models as an echolocation device, helping the driver determine the distance from the rear of the car to any objects that may be in its path.

Many materials, both natural and man-made, exhibit the piezoelectric effect. These materials include:

The family of ceramics with perovskite or tungsten-bronze structures exhibits piezoelectricity:

Direct piezoelectricity of some substances like quartz, as mentioned above, can generate potential differences of thousands of volts.

The principle of operation of a piezoelectric sensor is that a physical dimension, transformed into a force, acts on two opposing faces of the sensing element. Depending on the design of a sensor, different "modes" to load the piezoelectric element can be used: Longitudinal, transversal and shear.

Detection of pressure variations in the form of sound is the most common sensor application, for example, piezoelectric microphones (sound waves bend the piezoelectric material, creating a changing voltage) and piezoelectric pickups for electrically amplified guitars. A piezo sensor attached to the body of an instrument is known as a contact microphone.

For many sensing techniques, the sensor can act as both a sensor and an actuator—often the term transducer is preferred when the device acts in this dual capacity, but most piezo devices have this property of reversibility whether it is used or not. Ultrasonic transducers, for example, can inject ultrasound waves into the body, receive the returned wave, and convert it to an electrical signal (a voltage). Most medical ultrasound transducers are piezoelectric.

In addition to those mentioned above, various sensor applications include:

As very high voltages correspond to only tiny changes in the width of the crystal, this width can be changed with better-than-micrometer precision, making piezo crystals the most important tool for positioning objects with extreme accuracy—thus their use in actuators.

The piezoelectrical properties of quartz are useful as standard of frequency.

Types of piezoelectric motor include the well-known traveling-wave motor used for auto-focus in reflex cameras, inchworm motors for linear motion, and rectangular four-quadrant motors with high power density (2.5 watt/cm³) and speed ranging from 10 nm/s to 800 mm/s. All these motors work on the same principle. Driven by dual orthogonal vibration modes with a phase shift of 90°, the contact point between two surfaces vibrates in an elliptical path, producing a frictional force between the surfaces. Usually, one surface is fixed causing the other to move. In most piezoelectric motors the piezoelectric crystal is excited by a sine wave signal at the resonant frequency of the motor. Using the resonance effect, a much lower voltage can be used to produce a high vibration amplitude.

The TU Darmstadt in Germany researches ways to reduce and stop vibrations by attaching piezo elements. When the material is bent by a vibration in one direction, the system observes the bend and sends electric power to the piezo element to bend in the other direction.

Such an experiment was shown at the Material Vision Fair in Frankfurt in November 2005. Several panels were hit with a rubber mallet, and the panel with the piezo element immediately stopped swinging.

The research team sees future applications in cars and houses to reduce noise. 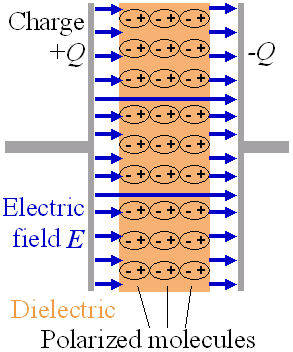 Any spatially separated charge will result in an electric field, and therefore an electric potential. Shown here is a standard dielectric in a capacitor. In a piezoelectric device, mechanical stress is the cause for the charge separation in the individual atoms of the material, rather than an externally applied voltage.

Of the thirty-two crystal classes, twenty-one are non-centrosymmetric (not having a centre of symmetry), and of these, twenty exhibit direct piezoelectricity (the 21st is the cubic class 432). Ten of these are polar (such as spontaneously polarize), having a dipole in their unit cell, and exhibit pyroelectricity. If this dipole can be reversed by the application of an electric field, the material is said to be ferroelectric.

In a piezoelectric crystal, the positive and negative electrical charges are separated, but symmetrically distributed, so that the crystal overall is electrically neutral. Each of these sites forms an electric dipole and dipoles near each other tend to be aligned in regions called Weiss domains. The domains are usually randomly oriented, but can be aligned during poling (not the same as magnetic poling), a process by which a strong electric field is applied across the material, usually at elevated temperatures.

When a mechanical stress is applied, this symmetry is disturbed, and the charge asymmetry generates a voltage across the material. For example, a 1 cm cube of quartz with 500 lbf (2 kN) of correctly applied force upon it, can produce a voltage of 12,500 V.

Piezoelectric materials also show the opposite effect, called converse piezoelectric effect, where the application of an electrical field creates mechanical deformation in the crystal.

Piezoelectricity is the combined effect of the electrical behavior of the material:

Where D is the electric displacement,

is permittivity and E is electric field strength, and Hooke's Law:

Where S is strain, s is compliance and T is stress.

These may be combined into so-called coupled equations, of which the strain-charge form is:

The strain-charge for a material of the 6mm crystal class (such as a poled piezoelectric ceramic, for example, PZT) may also be written as:

Although the above equations are the most used form in literature, some comments about the notation are necessary. Generally D and E are vectors, that is, Cartesian tensor of rank-1; and permittivity

. (Different convention may be used by different authors in literature. Say, some use

instead.) That is why S and T appear to have the "vector form" of 6 components. Consequently, s appears to be a 6 by 6 matrix instead of rank-4 tensor. Such a re-labeled nonation is often called Voigt notation.