Pierre Curie (May 15, 1859 – died April 19, 1906) was a French physicist, a pioneer in crystallography, magnetism, piezoelectricity and radioactivity.

Before joining his wife, Maria Skłodowska-Curie, in her research, Pierre Curie was already widely known and respected in the world of physics. He discovered (with his brother Jacques) the phenomenon of piezoelectricity - in which a crystal can become electrically polarized - and invented the quartz balance. His papers on crystal symmetry, and his findings on the relation between magnetism and temperature also earned praise in the scientific community.

He shared the 1903 Nobel Prize in physics with his wife Marie Curie and Henri Becquerel. Pierre and his wife were pivotal in the discovery of radium and polonium, both of which have had significant impacts on humankind in their practical and nuclear uses.

The marriage of Pierre and Marie Curie resulted in a scientific dynasty. Their children and grandchildren also became noted scientists.

Born in Paris, France, the son of Sophie-Claire Depouilly, daughter of a formerly prominent manufacturer, and Dr. Eugène Curie, a free-thinking physician who was also a physician's son. His father supported the family with his modest medical practice while pursuing his love for the natural sciences on the side. He was also an idealist and an ardent republican who set up a hospital for the wounded during the Commune of 1871.

Pierre received his pre-university education entirely at home, taught first by his mother and then by his father as well as his older brother, Jacques. He especially enjoyed excursions into the countryside to observe and study plants and animals, developing a love of nature that endured throughout his life and that provided his only recreation and relief from work during his later scientific career. At the age of 14 he showed a strong aptitude for mathematics and geometry and began studying with a mathematics professor who helped him develop his gift in the subject, especially spatial concepts. Pierre's knowledge of physics and mathematics earned him his bachelor of science degree in 1875 at the age of sixteen.

By the age of 18 he had completed the equivalent of a higher degree at the Sorbonne, also known as the University of Paris, but did not proceed immediately to a doctorate due to lack of money. Instead he worked as a laboratory instructor at his alma mater, becoming laboratory assistant to Paul Desains at the Sorbonne in 1878, in charge of the physics students' lab work. His brother Jacques was working in the mineralogy laboratory at the Sorbonne at that time, and the two began a productive five-year scientific collaboration.

In 1894, Pierre met his future wife Maria Skłodowska, who was studying physics and mathematics at the Sorbonne, and married her the following year on July 25, 1895, in a simple civil ceremony. Marie used a cash wedding gift to purchase two bicycles, which took the newlyweds on their honeymoon in the French countryside and provided their main source of recreation for years to come. Their daughter Irene was born in 1897, and a few days later Pierre's mother died; Dr. Curie then came to live with the young couple and helped care for his granddaughter.

Both Pierre and Marie were dedicated scientists, and collaborated as a team in isolating polonium and radium. They were pioneers in the study of radioactivity and were the first to use the term. Their work, including Marie's celebrated doctoral work, made use of a sensitive piezoelectric electrometer constructed by Pierre and his brother Jacques.

In 1880, Pierre and his older brother Jacques demonstrated that an electric potential was generated when crystals were compressed, piezoelectricity. Shortly afterwards, in 1881, they demonstrated the reverse effect: that crystals could be made to deform when subject to an electric field. Almost all digital electronic circuits now rely on this phenomenon in the form of crystal oscillators.

Prior to his famous doctoral studies on magnetism he designed and perfected an extremely sensitive torsion balance for measuring magnetic coefficients. Variations on this equipment were commonly used by future workers in that area. Pierre Curie studied ferromagnetism, paramagnetism, and diamagnetism and for his doctoral thesis, he discovered and wrote about the effect of temperature on paramagnetism which is now known as Curie's law. The material constant in Curie's law is known as the Curie constant. He also discovered that ferromagnetic substances exhibited a critical temperature transition, above which the substances lost their ferromagnetic behavior. This is now known as the Curie point.

Curie formulated what is now known as the Curie Dissymmetry Principle, which states in essence that: a physical effect cannot have a dissymmetry absent from its efficient cause. For example, a random mixture of sand in zero gravity has no dissymmetry (it is isotropic). Introduce a gravitational field, then there is a dissymmetry because of the direction of the field. Then the sand grains can ‘self-sort’ with the density increasing with depth. But this new arrangement, with the directional arrangement of sand grains, actually reflects the dissymmetry of the gravitational field that causes the separation. 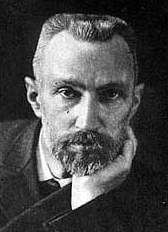 Pierre and Marie's work on radioactivity was based on results from Wilhelm Röntgen and Henri Becquerel. In 1898, the two found polonium after a thorough investigation, and then radium some months later, eventually preparing 1 g/0.04 oz. of radium from uraninite. Furthermore, Pierre and Marie discovered that beta rays are negatively charged particles. [1]

The Curies labored considerably to achieve their scientific accomplishments. The two were hard pressed financially, and it is reported that in order to save money on transportation from home to work, they would ride their bicycles. Indeed, a teacher's salary was minimal, yet Pierre and Marie still dedicated time and money to their research.[2]

Pierre Curie, along with one of his students, made the first discovery of nuclear energy, by identifying the continuous emission of heat from radium particles. He also investigated the radiation emissions of radioactive substances, and through the use of magnetic fields was able to show that some of the emissions were positively charged, some were negative and some were neutral. These correspond to alpha, beta and gamma radiation.

Curie shared the 1903 Nobel Prize in physics with his wife Marie Curie and Henri Becquerel, in recognition of the extraordinary services they have rendered by their joint researches on the radiation phenomena discovered by Professor Henri Becquerel.[3]

Did you know?
Pierre Curie's work was not recognized in France until he received the Nobel Prize for his work on radiation, together with his wife Marie Curie and Henri Becquerel, at which point he was given a professorship at the Sorbonne

Initially Curie did not receive much recognition in France, and was not given chairs of physical chemistry and minerology in the Sorbonne. In fact, he was only given a chair after considering leaving France for Geneva, which may have been due to his leftist views and disagreement over the Third Republic's policies on science.[4] He was later admitted into Académie in 1905 after being rejected in 1902.

The prestige of the Nobel Prize prompted the French parliament to create a new professorship for Curie at the Sorbonne in 1904. Curie declared he would not remain at the School of Physics unless the new chair included a fully funded laboratory, complete with assistants. His demand was met, and Marie was named his laboratory chief.

By early 1906, Pierre Curie was poised to begin work - at last and for the first time - in an adequate laboratory, although he was increasingly ill and tired.

On April 19, 1906, leaving a lunchtime meeting in Paris with colleagues from the Sorbonne, Curie slipped in front of a horse-drawn cart while crossing a rain-slicked rue Dauphine. Curie died as a result of the accident. His untimely death, although tragic, nevertheless, helped him to avoid a probable death by radiation exposure that later killed his wife. Both Pierre and Marie Curie were enshrined in the crypt of the Panthéon in Paris in April 1995.

The radioactivity of radium makes it a harmful substance, as scientists slowly came to realize in the early twentieth century after it was used as a luminescent paint on watch dials, panels, clocks, and other instruments (and deleterious side effects were noticed by lab workers and consumers alike). However, radium in the form of radium chloride has been beneficial in the field of medicine as a form of cancer treatment. Pierre and Marie Curie's contribution to this fact cannot be ignored.[5].

Polonium has various practical applications in industrial and nuclear settings. However, it is also known as a very toxic substance and can be used as a poison. Perhaps most influential is its use as a neutron trigger for nuclear weapons. [6]

The curie is a unit of radioactivity (3.7 x 1010 decays per second or 37 gigabecquerels) originally named in honor of Pierre Curie by the Radiology Congress in 1910, after Curie's death.

Pierre and Marie Curie's children and grandchildren also became important scientists. Their daughter Irene married Frederic Joliot and they were joint recipients of the Nobel Prize for Chemistry in 1935. The younger daughter, Eve, born in 1904, married the American diplomat H. R. Labouisse, who as Director of the United Nations' Children's Fund received on its behalf the Nobel Peace Prize in Oslo in 1965. She is the author of a biography of her mother, Madame Curie (Gallimard, Paris, 1938), translated into several languages.

Their granddaughter Hélène Langevin-Joliot is a professor of nuclear physics at the University of Paris and their grandson, Pierre Joliot, named after Pierre Sr., is a noted biochemist.

Retrieved from https://www.newworldencyclopedia.org/p/index.php?title=Pierre_Curie&oldid=1089013
Categories:
Hidden category:
This page was last edited on 24 November 2022, at 05:21.
Content is available under Creative Commons Attribution/Share-Alike License; additional terms may apply. See Terms of Use for details.