Antoine Henri Becquerel (December 15, 1852 – August 25, 1908) was a French physicist, Nobel laureate, and one of the discoverers of radioactivity. He inherited a tradition of research from his grandfather, Antoine Cesar Becquerel, who developed the field of electrolysis, and his father, A.E. Becquerel, who invented a new method for spectroscopic analysis. Henri's gifts included his ability to conduct extensive research and develop a summarizing theory which was written as a mathematical formula. He is known for the laws of radiation associated with phosphorescence. 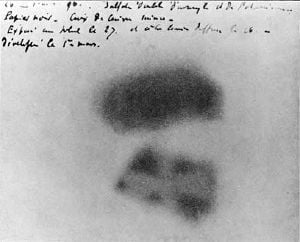 Image of Becquerel's photographic plate that was fogged by exposure to radiation from uranium salts. The shadow of a metal Maltese Cross placed between the plate and the uranium salts is clearly visible.

Becquerel's investigations were conducted during a period of new discoveries about energy, including the newly recognized X-rays of Wilhelm Conrad Röntgen. Duplicating Röntgen's experiments led Becquerel to intuitively compare the types of radiation and led him to accept the notion that some radiation comes from within the substance itself rather than by external stimulation, such as in the case of phosphorescence. His discovery of radiation from a uranium salt eventually contributed to a change in the paradigm of classical physics and helped begin the era of atomic physics. His work led to a more detailed understanding of the structure of matter and its relationship to energy.

Henri Becquerel was born in Paris, France, to a family which, including himself and his son, produced four generations of scientists. Henri's grandfather, Antoine Cesar Becquerel, invented a method of extracting metals from ores using electrolysis. His father, Alexander Edmond Becquerel, was a physicist who researched solar phenomena and phosphorescence.

As child, young Henri loved to visit his father's laboratory and took great delight in examining the various experimental set-ups he found there. Written accounts of that period of his life suggest there was a close relationship between father and son in the passing on of the scientific tradition. Two preceding generations of scientists gave Henri Becquerel the impetus to further illuminate the truth through scientific research.

In 1890, Becquerel married Louise Désirée Lorieux. Their son, Jean, became a physicist and studied the optical and magnetic properties of crystals.

Education in engineering and physics

Antoine Henri Becquerel was educated at Lycee Louis-le-Grand during his early years. He moved on to the Ecole Poytechnique, and finally the Ecole des Ponts et Chaussees. His direction in life seems to have always been focused on science. He won his engineering degree in 1877 and served with the National Administration of Bridges and Highways while maintaining an interest in problems of a scientific and theoretical nature. In 1878, he accepted a teaching position in physics at the Conservatoire des Arts et Metiers. Within ten years, he had earned his doctorate with a dissertation on the absorption of light by crystals.

In 1892, he became the third in his family to occupy the physics chair at the Muséum National d'Histoire Naturelle. In 1894, he became chief engineer in the Department of Bridges and Highways.

Research and discovery of radioactivity

Early in his career as a research physicist, Henri Becquerel developed laws of radiation of light from phosphorescent substances. While attending a lecture on the discovery of "X-rays," Becquerel's attention was captured by the mention of a fluoroscope, a device his father had invented. Shortly afterward, he began his own study of X-rays, reproducing Wilhelm Röntgen's experiments. He became intrigued by a suspicion that fluorescent materials just might emit some of these mysterious X-rays.

In 1896, he began working with crystals of a uranium compound (potassium uranyl sulfate), which, after exposure to sunlight, emitted fluorescent light. To determine whether X-rays were being emitted by the compound, he prepared a photographic plate for use after exposing a sample of the uranium salt to the Sun. As it turned out, a cloudy period ensued, during which no sunlight was available. Becquerel was at an impasse. He wrapped the crystals and a copper cross in a black cloth with the photosensitive plate and put them in a drawer, intending to retrieve them later. Quite a number of rainy days followed, with no sunlight.

He finally removed the plate from the drawer and developed it, expecting to see some faint evidence of emission of radiation. To his immense surprise, the photographic plate revealed a distinct image of the copper cross, evidence that strong radiation must have come from the uranium compound itself. In this manner, he accidentally discovered the phenomenon that came to be known as "radioactivity."

Describing his method to the French Academy of Sciences on January 24, 1896, he said,

Becquerel was Marie Curie's doctoral adviser and collaborated with Pierre and Marie Curie in their studies of radioactivity. He assisted them in obtaining two Academy of Science grants for their work. With Becquerel's support, the Curies published their findings on radium in the journal of the Academy of Science in France. Marie Curie used the term "Becquerel rays" when referring to the radiation discovered by Becquerel. In addition, she was the first to use the term "radioactivity" to describe both Becquerel rays and the radiation that she and Pierre discovered emanating from radium.

Meanwhile, based on his research on radiation phenomena, Becquerel declared, in 1899, that the rays could be deflected by a magnetic field. This observation suggested that at least some of the radiation was composed of electrically charged particles. In 1900, he was clearly committed to the idea that the radiation had to include particles of negative charge—just like the cathode rays discovered by J.J. Thompson.

In 1901, Becquerel identified uranium as the component of his experimental compound that emitted the radiation. He published a half dozen papers exploring the phenomenon of radioactivity before turning his attention to other interests.

In 1903, Becquerel shared the Nobel Prize in Physics with Pierre and Marie Curie, "in recognition of the extraordinary services he has rendered by his discovery of spontaneous radioactivity."

Although Becquerel was the only one of the three present at the awarding of the Nobel Prize for Physics in 1903, it was clear that he and the Curies each deserved recognition for their unique contributions to the understanding the newly discovered phenomenon called "radioactivity".

In 1908, Becquerel was elected permanent secretary of the Académie des Sciences. He died the same year, at the age of 55, in Le Croisic.

Henri Becquerel can be seen as a pioneer in a new world of subatomic phenomena at the close of the nineteenth century. He possessed the ability to formalize experimental results into precise mathematical statements. His exploration of invisible but detectable emanations coming from within the atom itself led to a pivotal redefinition of the nature and structure of the atom and helped introduce a revolutionary era of atomic physics. In addition, it led to new ideas about the relationship between matter and energy. Becquerel was willing to risk his health by allowing himself to be burned by the radiation he was researching in order to better understand its effects. Along with the Curies, he was a pioneer of the study of radiation a phenomena which changed not only the field of physics but certainly affected modern medical science. He was Marie Curie's doctoral supervisor and shared the Nobel Prize in Physics with Pierre and Marie Curie.