Polonium (chemical symbol Po, atomic number 84) is a rare, extremely toxic, and highly radioactive chemical element. It is found in small amounts in uranium ores and is chemically similar to tellurium and bismuth. It has been used in brushes that remove dust from photographic film and in devices that eliminate electrostatic charges in areas such as textile mills. When mixed or alloyed with beryllium, it can be a source of neutrons. In addition, the isotope polonium-210 has been used as a lightweight heat source to power thermoelectric cells in artificial satellites, but it has a short half-life and is not useful for long-term space missions.

A very rare element in nature, polonium is found in uranium ores at about 100 micrograms per metric ton (1:1010). Its natural abundance is approximately 0.2 percent that of radium. It has also been identified in tobacco smoke from tobacco leaves grown in certain places.

A 1934 experiment showed that when natural bismuth-209 was bombarded with neutrons, it was converted to bismuth-210, the parent of polonium. This procedure can now be applied to produce polonium in milligram amounts, using the high neutron fluxes present in nuclear reactors.

Once known as Radium F, polonium was discovered by Maria Skłodowska-Curie (Marie Curie) and her husband, Pierre Curie, in 1898. Later, the element was named after Marie's homeland of Poland (Latin word Polonia). At the time, Poland was not recognized as an independent country but was partitioned and under Russian, Prussian, and Austrian domination. It was Marie's hope that naming the element after her homeland would call attention to its plight.

This element was the first one discovered by the Curies while they were investigating the cause of the radioactivity of pitchblende, a uranium-rich mineral. The pitchblende, after removal of uranium and radium, was more radioactive than radium and uranium put together. This spurred them on to find the element. The electroscope showed that it separated with bismuth.

Polonium is a chemical element that lies in group 16 (former group 6A) of the periodic table, just below tellurium. In addition, it is part of period 6, situated between bismuth and astatine. Like tellurium, polonium is classified as a metalloid, because its properties are intermediate between those of metals and nonmetals. Polonium is highly radioactive, and all elements from polonium onward are significantly radioactive.

This substance dissolves readily in dilute acids but is only slightly soluble in alkalis. Chemically, it is closely related to bismuth and tellurium. Polonium (in common with plutonium-238) has the ability to become airborne with ease. To explain this phenomenon, one hypothesis suggests that small clusters of polonium atoms may be ejected during the emission of alpha particles.

Some researchers have reported that methyl groups can be attached to polonium by certain microbes or by the chemical compound methylcobalamin.[1] 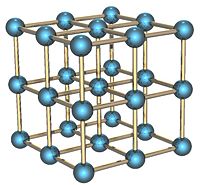 A model of the alpha form of solid polonium.

Solid polonium can exist in two forms: alpha and beta. In the alpha form, the atoms are arranged as a simple cubic crystal system that is not interpenetrated, as shown in the illustration. In the beta form, the atoms lie in a hexagonal arrangement.

There are many known isotopes of polonium, with atomic mass numbers ranging from 188 to 220 u. All of these isotopes are radioactive. The most widely available isotope is polonium-210 (half-life 138.4 days), which emits alpha particles. Polonium-209 (half-life 103 years) and polonium-208 (half-life 2.9 years) can be made by the bombardment of lead or bismuth with alpha particles, protons, or deuterons in a cyclotron. These isotopes, however, are expensive to produce.

All elements containing 84 or more protons are radioactive. Alpha decay is a common form of decay for these nuclei. The most stable isotopes with more than 84 protons are thorium-232 and uranium-238. They form an "island of stability" that renders them stable enough to be found in large quantities in nature, but heavier nuclei are increasingly affected by spontaneous fission.

Polonium is a highly radioactive, toxic element and should be handled with extreme care. Handling milligram, or even a microgram, amounts of polonium-210 is dangerous and requires special equipment with strict procedures.

As long as polonium-210 remains outside the body, its radiation cannot penetrate the skin. On the other hand, the radiation can severely damage body tissue once the isotope enters the body by ingestion or inhalation, or through an open wound.

The maximum allowable body burden for ingested polonium is only 1,100 becquerels (0.03 microcurie), which is equivalent to a particle weighing only 6.8 × 10-12 gram. Weight for weight, polonium is approximately 2.5 × 1011 times as toxic as hydrocyanic acid. The maximum permissible concentration for airborne soluble polonium compounds is about 7,500 becquerels per cubic meter (2 × 10-11 microcurie per cubic centimeter).

A case of polonium poisoning

Alexander Litvinenko, a 43-year-old former Russian spy living in London, died on November 23, 2006, after a three-week illness. According to news reports, his death was linked to "a major dose of radioactive polonium-210 in his body."[4]