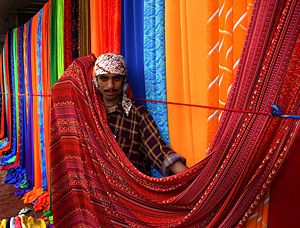 A textile vendor displays his wares on a sidewalk in Karachi, Pakistan.

A textile is a flexible material composed of a network of natural or artificial fibers often referred to as thread or yarn. Textiles are formed by weaving, knitting, crocheting, braiding, knotting, or pressing fibers together. In addition, the fibers themselves may be referred to as textiles.

The development of textiles has played an important part in the development of human civilizations. Since ancient times, humans have found ways to make textiles, which have been used chiefly to produce articles of clothing. In this manner, people have learned to protect their bodies from elements of the weather—the heat, cold, rain, snow, and so forth. Consequently, textiles have helped people dwell in regions with a wide range of climatic conditions, allowing us to broaden our horizons.

Over the past century, textiles made from synthetic fibers have been used in conjunction with those made with naturally occurring materials, thus broadening the types of textiles available. In addition to clothing, textiles are used for carpeting, furniture upholstery, table cloths, bedsheets, tents, flags, balloons, parachutes, and sails. Textiles are also used for artwork.

Textiles are used in assorted ways, of which the most common are for clothing and containers such as bags and baskets. In the household, textiles are used in carpeting, upholstered furnishings, towels, and coverings for tables, beds, and other flat surfaces. Textiles are also used for artwork.

In the workplace, textiles are used in industrial and scientific processes such as filtering. Miscellaneous uses include the production of flags, tents, nets, and cleaning devices. In addition, textiles are used in devices made for transport and recreation, such as sails, balloons, kites, and parachutes. Textiles that are used for industrial purposes and chosen for characteristics other than appearance are commonly referred to as technical textiles. 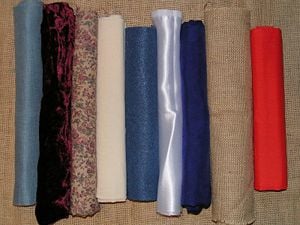 Textiles can be made from many materials, which have been derived from four main sources: animal, plant, mineral, and synthetic. In the past, all textiles were made from natural fibers obtained from plant, animal, and mineral sources. In the twentieth century, these were supplemented by artificial fibers made from petroleum.

Textiles are made in various strengths and degrees of durability, from the finest gossamer to the sturdiest canvas. The relative thickness of fibers in cloth is measured in deniers. Microfiber refers to fibers made of strands thinner than one denier.

Timeline of clothing and textiles technology

Animal textiles are commonly made from hair or fur of animals. Wool, commonly used for warm clothing, refers to the hair of the domestic goat or sheep. It is distinguished from other types of animal hair in that the individual strands are coated with scales and tightly crimped, and the wool as a whole is coated with an oil known as lanolin, which is waterproof and dirtproof. The term woollen refers to raw wool, while worsted refers to the yarn spun from raw wool. Cashmere, the hair of the Indian cashmere goat, and mohair, the hair of the North African angora goat, are types of wool known for their softness.

Other animal textiles made from hair or fur are alpaca wool, vicuña wool, llama wool, and camel hair. They are generally used in the production of coats, jackets, ponchos, blankets, and other warm coverings. Angora refers to the long, thick, soft hair of the angora rabbit.

Silk is an animal textile made from the fibers of the cocoon of the Chinese silkworm. It is spun into a smooth, shiny fabric prized for its sleek texture. 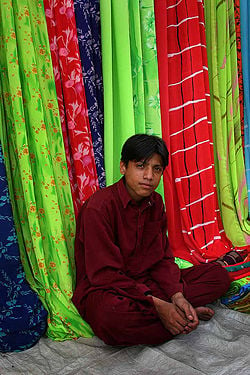 A textile shop in Karachi, Pakistan

Grass, rush, hemp, and sisal are all used in making rope. In the first two cases, the entire plant is used for this purpose, while in the latter two, only fibers from the plant are utilized. Coir (coconut fiber) is used in making twine, floormats, doormats, brushes, mattresses, floor tiles, and sacking.

Straw and bamboo are both used to make hats. Straw, a dried form of grass, is also used for stuffing, as is kapok. Fibers from pulpwood trees, cotton, rice, hemp, and nettle are used in making paper.

Cotton, flax, jute, and modal are all used in clothing. Piña (pineapple fiber) and ramie are also fibers used in clothing, generally with a blend of other fabrics such as cotton.

Seaweed is sometimes used in the production of textiles. A water-soluble fiber known as alginate is produced and used as a holding fiber. When the cloth is finished, the alginate is dissolved, leaving an open area.

Glass fiber is used in the production of spacesuits, ironing board and mattress covers, ropes and cables, reinforcement fiber for motorized vehicles, insect netting, flame-retardant and protective fabric, soundproof, fireproof, and insulating fibers.

Metal fiber, metal foil, and metal wire have a variety of uses, including the production of "cloth-of-gold" and jewelry.

All synthetic textiles are used primarily in the production of clothing.

Knitting and crocheting involve interlacing loops of yarn, which are formed either on a knitting needle or crochet hook, together in a line. The two processes differ in that the knitting needle has several active loops at one time waiting to interlock with another loop, while crocheting never has more than one active loop on the needle.

Lace is made by interlocking threads together independently, using a backing and any of the methods described above, to create a fine fabric with open holes in the work. Lace can be made by hand or machine.

Carpets, rugs, velvet, velour, and velveteen are made by interlacing a secondary yarn through woven cloth, creating a tufted layer known as a nap or pile.

Textiles are often dyed to produce them in almost every color. Colored designs on textiles can be created in a number of ways:

Textiles are also sometimes bleached. In this process, the material's original color is removed by chemicals or exposure to sunlight, turning the textile pale or white.