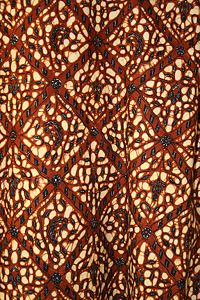 Batik is an Indonesian word, and refers to a generic wax-resist dyeing technique used on textile. The word originates from Javanese word amba, meaning ”to write,” and the Javanese word for dot or point, titik. The technique is known to be more than one thousand years old, possibly originating in ancient Egypt or Sumeria. Batik is found in several countries in West Africa such as Nigeria, Cameroon, and Mali, and in Asia, such as India, Sri Lanka, Bangladesh, Iran, Thailand, and Malaysia, but the art of batik probably reached its greatest development in Indonesia, and some of the finest batik cloth is still made there.

To make traditional batik, designs are hand-drawn with hot wax on prepared fabric, using special tools called cantin. Designs follow standardized patterns, some of which have been preserved for centuries. The wax is used to cover the areas which are to be protected from the dye. The cloth is then dyed, and additional areas are covered with wax before it is immersed in a second color of dye. This process is repeated until all of the colors have been added. The making of a fine batik can take as long as six months, and such works are highly prized.

The batik technique is known to be more than a thousand years old. There is evidence that cloth decorated through some form of resist technique was in use in the early centuries C.E. It is unclear whether the technique originated in one place or several. Archeological evidence of the use of batik cloth has been found in Egypt, Persia, India, China, Japan, Indonesia, and other parts of Southeast Asia. In Africa, batik is found decorated with tribal patterns; in India, with the ancient paisley patterns; and in China and Japan, with delicate oriental motifs.[1] Some historians suggest that the concept originated in Egypt or Sumeria, spread to Africa and Persia, and eventually to Asia. J. A. Loeber suggests that the process originated in the Indian Archipelago, where historical records describe people dying their white clothes blue when they became dirty. Rice starch, the forerunner of wax in the resist technique, was used on the island of Flores to strengthen fabric.[2]

Did you know?
Wax resist technique of dyeing fabric is an ancient art form, dating back more than one thousand years

Some archaeological findings of batik in Indonesia date to the tenth century. Fragments of sculpture from a twelfth century temple in Java show figures wearing garments ornamented with patterns that strongly resemble those of contemporary batik. It is believed that batik was at first a pastime of aristocratic ladies in the Javanese courts, where it became a symbol of status to wear clothing displaying beautiful artistry and color. In the Kraton, or Javanese court, batik was one of the six priyayi, "high arts" studied by the cultured Javanese gentry. Along with music and dance, the creation of batik was considered to be a way to develop spiritual discipline. According to Indonesian tradition, each time the batik artisan executes a particular intricate pattern, the design is not only fixed to the cloth, but the meaning of the design is engraved more deeply in the soul of the artisan. As the popularity of batik grew, servants were enlisted in the manufacture of batik, and it came to be worn by both men and women of all social classes.

Eventually, the labor of dyeing the fabric was done by men, while women did the designing and application of wax to the fabric. Chinese settlers in Indonesia began “batik factories” involving entire villages in the production process.[3]

When the Dutch took sovereignty over Indonesia in the seventeenth century, they introduced batik to Holland and subsequently to the rest of Europe. Dutch factories developed their own techniques, and created fabric for export to Africa. Batiks were also brought home by West African soldiers who served in Indonesia between 1810 and 1862. Today, “Java wax” batiks and printed imitations are manufactured in factories in Europe, Japan and several West African countries. The designs have evolved from indigenous handmade textiles, and are often created to evoke religious themes and religious hymns, commemorate renowned individuals, historical occasions, and popular songs, portray everyday situations, or illustrate proverbs and metaphors.[4] A good-quality “Java wax” is highly prized and may sell for several hundred dollars.

In 1750, an attempt to import 2,000 pieces of batik into Holland failed because no market could be found for them. In the 1800s, however, interest in batik revived, and during the twentieth century, a number of artists such as Pieter Mijer, Chris Lebeau, Dijesselhof, and Lion Cachet, developed it as a form of fine art.[5] Contemporary batik artists may use etching, discharge dyeing, stencils, different tools for waxing and dyeing, wax recipes with different resist values and work with silk, cotton, wool, leather, paper or even wood, and ceramics. The ever widening range of techniques available offers the artist the opportunity to explore a unique process in a flexible and exciting way. 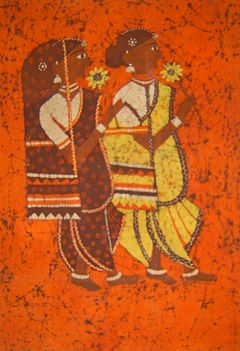 Many aristocratic Javanese families developed their own signature patterns. Unique patterns were developed in each area, reflecting the local availability of dyes and preference of color, and incorporating symbolism and regional flora and fauna, such as animals, birds, butterflies, fish, shells, flowers, fruits, and leaves, in the designs. Because Islam prohibits the representation of any living being, animals such as the peacock, eagle, and elephant were sometimes highly stylized.

There are more than 3,000 recorded patterns of batik, some of which have endured unchanged for centuries. Many patterns were intended for a particular use, or were forbidden to commoners, such as batik parang rusa and batik swat, which were reserved for the exclusive use of royalty. Though each individual worker might introduce variations, the designs were based on standard patterns. 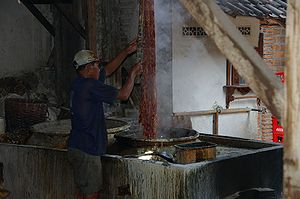 Dipping a cloth in a dye.

The batik process produces a design on textiles through the use of a dye-resist, usually wax, which prevents the dye from penetrating the covered areas of the fabric, thus creating a pattern in negative. Batik is usually done on good-quality cotton fabric, although silk can be used. Before the initial application of the design, the fabric is washed several times to remove any starch, chalk or other sizing. The fabric is then soaked in coconut oil or djarak oil for a few days to change the color to a creamy white. The oil also acts as a color-fastening agent. Excess oil is then removed by boiling the fabric in water with the ashes of rice stalks. The cloth is dried, cut to size and hemmed. It is re-starched with rice water to hold the threads in place, dried, and pounded to make it supple.

The cloth is then draped over a frame, and the artisan begins to apply wax using a canting, a wooden handled tool holding a tiny copper cup with a tiny curved spout, out of which the wax seeps. The wax, usually beeswax mixed with animal fat and a few grain of Borneo rosin, is melted in a pot on a small stove. The artisan must work quickly, in order to avoid applying the wax too thickly. Cantings with spouts of varying sizes and shapes are used achieve different effects. Some artisans work from memory, others use outlines drawn lightly with charcoal. Wax dots or solid lines are first applied to the outlines of the pattern, and then the detailed ornamentation, called isen, is filled in. This process is called tulis. When the initial waxing of the design has been completed, the process is repeated on the back side to be sure that the wax has completely penetrated the fabric.

The fabric is then immersed in the first color of dye. After it has dried, wax is applied to all of the areas which are to remain that color, and the cloth is dyed in a second color. The process is repeated until all the colors have been added. Sometimes wax is removed from certain areas to expose them to the next dye bath. When the dyeing is complete, the fabric is soaked in a fixative and then placed in a vat of hot water. The wax melts and floats to the surface, where it is skimmed off for future use.

The making of an intricate hand-drawn batik is a lengthy and painstaking process which, together with the dye baths, can take from five weeks to six months or more. Early in the twentieth century, the Javanese developed copper blocks (tjiap) which can be used to stamp wax onto the cloth in intricate patterns much faster than can be done by hand-painting. Batiks produced by this method are considered to be of a lower quality, and be distinguished by slight irregularities at the place where the edges of the stamped pattern are joined.

Traditionally, batik dyes were made from plants. The most widely used were indigo blue and soga, a warm brown color made from the bark of the soga tree. Complex recipes with esoteric substances, such as chicken's blood, banana pulp, and fermented cassavas (added to the dye bath to ward off evil), were passed down through families. Dying was generally done by men, and rituals and taboos were observed to ensure a successful result. Today, aniline and other chemical dyes are almost universally used for batik dying.[6]

Contemporary artists use wax-resist processes to produce wall hangings and to decorate fabric in a unique fashion. A mixture of beeswax and paraffin is usually used; a greater proportion of paraffin makes the wax more brittle and subject to “crackling.” Methods of applying the wax onto the fabric include pouring the liquid wax, painting the wax on with a brush, and applying the hot wax with an electric stylus or a stamp.

After the last dyeing, the fabric is hung up to dry. Then it is dipped in a solvent to dissolve the wax, or ironed between paper towels or newspapers to absorb the wax and reveal the deep rich colors and the fine crinkle lines that give batik its character.