Pineapple is the common name for low-growing, fruit-bearing, tropical plants of the species Ananas comosus (also known as A. sativus) in the bromeliad family (Bromeliaceae). It is also the name for the large, edible, multiple fruit of this plant. A. comosus has long, swordlike leaves and the fleshy fruit has a tuft of leaves on one end as well. It is native to Central and South America, but has been introduced elsewhere, including Hawaii, which now is a main commercial producer of the fruit (Herbst 2001).

In addition to serving as food, with its natural sweetness, the pineapple has served in history as a symbol and an artistic motif. According to Levins (2004), the rarity, reputation, expense, and visual attractiveness of the pineapple made it an item of celebrity and the "ultimate exotic fruit." The pineapple was so coveted and uncommon that in the 1600s King Charles II of England posed receiving a pineapple as a gift in an official portrait. In colonial America, the pineapple became a symbol of hospitality, and served as the pinnacle of an entertaining household's feast, even being rented to households during the day for display on the table and then sold to more affluent clients who actually ate it (Levins 2004). As a symbol of hospitality and friendship, the pineapple became a favorite motif of architects, artisans, and craftsman in the American colonies, and would be seen on the main gate posts of mansions, in the weather vanes of public buildings, and on walls, canvas mats, tablecloths, napkins, the backs of chairs, in china, and so forth (Levins 2004).

In addition to the hospitality and friendship symbolism of a bygone era, the pineapple reflects the harmony in nature, as it provides food for hummingbirds and in turn is pollinated by the birds.

Ananas comosus is an herbaceous perennial plant, 1–1.5 meters tall, with 30 or more trough-shaped and pointed leaves, 30–100 cm long, surrounding a thick stem. Among common cultivars, the leaves of the Smooth Cayenne cultivar mostly lack spines except at the leaf tip, but the Spanish and Queen cultivars have large spines along the leaf margins.

Pineapples are the only bromeliad fruit in widespread cultivation. The pineapple is a multiple fruit, meaning it is formed from a cluster of flowers (called an inflorescence) growing on a catkin, with each flower on the catkin producing a fruit and the entire cluster maturing into a single mass—the pineapple. The fruitlets of a pineapple are arranged in two interlocking spirals, eight spirals in one direction, thirteen in the other; each being a Fibonacci number. This is one of many examples of Fibonacci numbers appearing in nature.

The natural (or most common) pollinator of the pineapple is the hummingbird. Pollination is required for seed formation; the presence of seeds negatively affects the quality of the fruit. In Hawaii, where pineapple is cultivated on an agricultural scale, importation of hummingbirds is prohibited for this reason.

Certain bat-pollinated wild pineapples do the exact opposite of most flowers by opening their flowers at night and closing them during the day; this protects them from weevils, which are most active during daylight hours.

The name pineapple in English (or piña in Spanish) comes from the similarity of the fruit to a pine cone.

In the scientific binomial Ananas comosus, ananas, the original name of the fruit, comes from the Tupi (Rio de Janeiro, Brazil) word for pineapple nanas, as recorded by André Thevenet in 1555. Nana means "excellent (or exquisite) fruit (Herbst 2001). Comosus means "tufted" and refers to the stem of the fruit. Other members of the Ananas genus are often called pineapple as well by laymen.

Pineapples sold on the market typically average between two to five pounds in weight, but pineapples can grow to a weight of 20 pounds (Herbst 2001). All have diamond-patterned skin (Herbst 2001).

The two major varieties commercially important in the United States are the Smooth Cayenne, from Hawaii, and the Red Spanish, mainly from Florida and Puerto Rico (Herbst 2001). The golden-yellow skinned Cayenne is longer and more cylindrical and has long, swordlike leaves sprouting from a single tuft, while the reddish golden-brown skinned Red Spanish is squatter in shape, and has leaves radiating from several tufts (Herbst 2001).

Canned pineapple is almost always Smooth Cayenne. At one time, most fresh pineapples also were produced on Smooth Cayenne plants. However, today the most common fresh pineapple fruit found in United States and European supermarkets is a low-acid hybrid that was developed in Hawaii. (See cultivation history). 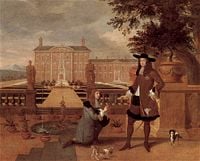 The pineapple is endemic to Central and South America and symbolic representations have been found in pre-Inca ruins (Herbst 2001).

The pineapple spread from its original area through cultivation, and by the time of Christopher Columbus it grew throughout South and Central America, southern Mexico, and the Caribbean (West Indies). Columbus may have taken a sample back to Europe.

The Spanish introduced it into the Philippines, Hawaii (introduced in the early nineteenth century, first commercial plantation 1886), and Guam. The fruit was successfully cultivated in European hothouses beginning in 1720.

In 1997, Del Monte began marketing its Gold Extra Sweet pineapple, known internally as MD-2. MD-2 is a hybrid that originated in the breeding program of the now-defunct Pineapple Research Institute in Hawaii, which conducted research on behalf of Del Monte, Maui Land and Pineapple, and Dole. Two similar seedlings, numbered 73-114 and 73-50, were found to have bright-gold, very sweet, low-acidity flesh, high resistance to parasites and internal rot, skin that turned amber when ripe and, best of all, the ability to survive cold storage for up to two weeks. Both versions were briefly marketed, but at the time, could not dent the Smooth Cayenne stranglehold on the Hawaiian industry.

The Pineapple Research Institute dissolved in 1986 and its assets were divided between Del Monte and Maui Land and Pineapple. Del Monte took 73-114, which it dubbed MD-2, to its plantations in Costa Rica, found it to be well-suited to growing there, and launched it publicly in 1996. (Del Monte also began marketing 73-50, dubbed CO-2, as Del Monte Gold.) 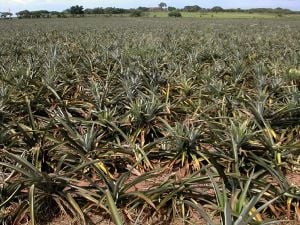 A pineapple field in Veracruz, Mexico.

In commercial farming, flowering can be artificially induced and the early harvesting of the main fruit can encourage the development of a second crop of smaller fruits.

Pineapple is commonly used in desserts and other types of fruit dishes, or served on its own.

Fresh pineapple is often somewhat expensive as the tropical fruit is delicate and difficult to ship. Under normal conditions, the starch in the fruit will not convert to sugar when it is off the plant, and thus the fruit should be picked ripe for consumption (Herbst 2001). Pineapples can ripen after harvest, but require certain temperatures for this process to occur. The ripening of pineapples can be rather difficult as they will not ripen for some time and in a day or two become over-ripe; therefore, pineapples are most widely available canned. Pineapples, like bananas, are chill-sensitive and should not be stored in the refrigerator.

Pineapple contains a proteolytic enzyme bromelain, which digests food by breaking down protein (Bender and Bender 2005). Pineapple juice can thus be used as a marinade and tenderizer for meat. The enzymes in pineapples can interfere with the preparation of some foods, such as gelatin-based desserts. Fresh pineapple cannot be used to make jelly, as the bromelain in the fruit prevents gelatin from setting.

Some have claimed that pineapple has benefits for some intestinal disorders, while others claim that it helps to induce childbirth when a baby is overdue (Adaikan and Adebiyi 2004). These enzymes can be hazardous to someone suffering from certain protein deficiencies or disorders, such as Ehlers-Danlos syndrome.

Pineapple can also be used to enhance digestion. However, due to its high acidity, some people believe that excessive pineapple consumption can lead to erosion of the stomach lining.

Fresh pineapple may cause irritation of the tip of the tongue in some cases. Some may describe this sensation as a raw tingling. Some believe that dipping pineapple slices in a mild salt water solution will mitigate this effect and may also intensify the pineapple flavor.

Pineapple is traditionally used in the Philippines as an antihelminthic agent to expel parasitic worms (helminths) from the body] (Monzon 1995).

The pineapple is an old symbol of hospitality and can often be seen in carved wood decorations and stone sculptures (untufted pineapples are sometimes mistaken for pine cones).