From New World Encyclopedia
Jump to:navigation, search
Previous (Vitamin A)
Next (Vitamin B6) 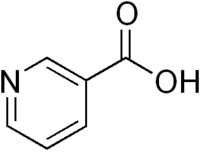 Structure of Vitamin B3, niacin

The B vitamins or vitamin B complex are a group of eight, chemically distinct, water-soluble vitamins that were once considered a single vitamin (like Vitamin C), but now are seen as a complex of vitamins that have loosely similar properties and generally are found in the same foods. Vitamins are organic (carbon-containing) nutrients obtained through the diet and essential in small amounts for normal metabolic reactions in humans. The B vitamins play important roles in cell metabolism.

Although the B vitamins are needed in only small amounts, they are essential for health and must regularly be replenished. Without the intake of these vitamins, one can experience various diseases (such as beriberi and pellagra) or other stresses on one's body, such as anemia, depression, memory loss, and so forth. For good health, personal responsibility for one's nutrition and self-discipline and balance in one's eating habits are vital.

The B vitamins include thiamine, riboflaven, niacin, pantothenic acid, pyridoxine, biotin, folic acid, and cobalamin. These are also referred to by a number, such as Vitamin B1 for thiamine and Vitamin B2 for riboflavin. In contradistinction to the definition given above for vitamin, some authorities include choline, inositol, PABA (para-aminobenzoic acid), and lipoic acid as part of the B vitamins (Longe 2005). However, these four unnumbered nutrients are not essential because they can be synthesized by the human body.

The numbers that do not appear in the sequence, Vitamin B4, Vitamin B8, and so forth, were nutrients that were either found to be duplicate substances or non-vitamins (see related nutrients).

The B vitamins often work together to deliver a number of health benefits to the body. B vitamins have been shown to:

Together, they also help combat the symptoms and causes of stress, depression, and cardiovascular disease.

All B vitamins are water soluble, and are dispersed throughout the body. They must be replenished daily with any excess excreted in the urine.

B vitamins come from a number of natural sources, including potatoes, bananas, lentils, chili peppers, tempeh, liver, turkey, and tuna. Nutritional yeast (or brewer's yeast) is an especially good source. The Australian spread Vegemite is considered a rich source of the B vitamins. As might be expected, due to its high content of brewer's yeast, beer is a reasonable source of B vitamins (Glaser 2002), although this may not be true of filtered beers (Harden and Zylva 1924).

Another popular means of increasing one's intake of the B vitamins is through the use of dietary supplements. B vitamins are also commonly added to energy drinks.

Several named vitamin deficiency diseases may result from the lack of sufficient B vitamins.

Deficiencies of other B vitamins result in symptoms that are not part of a named deficiency disease.

Many of the following substances have been referred to as vitamins because they were believed to be vitamins at one time. They are relevant to vitamin nomenclature in that the numbers that were assigned to them form "gaps" in the series of B-vitamin names (along with duplicate factors). While they are non-"essential" to humans in that they may be synthesized by the body from other starting materials, they have nutritional significance. Some of them, though not essential to humans, are essential to other organisms.