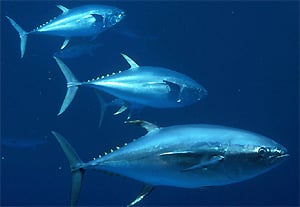 Tuna is any of 14 species of ocean-dwelling fish comprising the tribe Thunnini in the family Scombridae (the mackerel family). The 14 species are collected into five genera—Thunnus, Euthynnus, Allothunnus, Auxis, and Katsuwonus (Nelson 1994). Tuna is also the name of the commercial food from these species.

Tunas are fast-swimming fish spread widely through the world's oceans and seas. They often travel and forage as schools of diverse tuna species sharing similar body size. Some species travel great distances and some, whose members are able to raise their body temperature significantly above the temperature of the surrounding water, forage through a wide range of water temperature regimes.

Tuna are important in food chains, consuming fish, plankton, and mollusks, and being consumed by sharks, rays, billfishes, larger tunas, and toothed whales. They are also important to human beings for food and for sport fishing. Tuna meat is very popular both canned and raw (as sashimi and with rice as sushi).

Tuna's place in the food chain as both predator and prey demonstrates the important principle of interdependence: each individual tuna pursues its individual purposes of survival, maintenance, and reproduction, while it also fulfills a greater purpose by providing value to the ecosystem. Beyond the natural ecosystem, tuna provide food and recreation for human beings. In return, humans, in principle, should exercise responsible stewardship of the tuna fisheries. The reality, instead, is that humans are overfishing some tuna species to the extent of pushing a few of their fisheries perilously close to collapse.

An important development of recent decades is the rapid spread of industrial farming of tuna in huge net enclosures along the coasts of countries ranging from Croatia, to Mexico, Japan, and Australia. Potentially of great importance for feeding humanity, the industry, as currently practiced, stresses both the environment and the stocks of wild fish while servicing primarily the Japanese market for raw tuna. 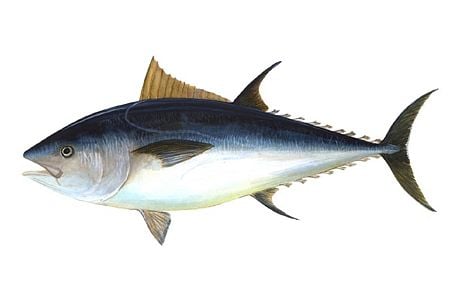 Tunas range in size from the bullet tuna (Auxus rochei eudorax), which reaches one-half a meter in maximum size, to the Northern bluefin tuna (Thunnus thynnus), which reaches 4.6 meters (15 feet) in maximum size and up to 800 kilograms (1,760 pounds). The commercially important false albacore or "little tunafish" (Euthynnus alletteratus) reaches a maximum size of about 1.2 meters (4 feet) and averages about 4.5 kilograms (9.9 pounds).

Tunas are found in temperate and tropical marine waters worldwide, being common in the Pacific Ocean and Atlantic Ocean, but also found in the Mediterranean Sea, Black Sea, and elsewhere. Pacific bluefin tuna spawn in the Western Pacific between Okinawa and the Philippines and probably the Sea of Japan/East Sea, then migrate over six thousand nautical miles (11,100 kilometers) to the Eastern Pacific, and eventually return to their birth waters to spawn again.

Tunas are fast swimmers, having been clocked at 77 kilometers per hour (46 miles per hour). One of the important physiological adaptations that enhances their ability to swim so fast is a heat exchange system that keeps the swimming muscles warm by conserving heat when outgoing veins carrying warm, carbon dioxide-laden blood toward the gills pass the heat over to incoming arteries carrying cold oxygenated blood from the gills. By this method, tunas, as well as certain other fish species, maintain elevated body temperatures to varying degrees.

The bluefin tuna’s heat exchange system works so well that it can elevate the bluefin’s body temperatures to more than 20 °C above ambient water temperatures. Generating and sustaining elevated body temperatures in general allows fish to be active in colder waters and to have enhanced swimming ability. This is in contrast to most fish, which are cold-blooded (poikilothermic), meaning that they do not maintain constant internal temperatures and instead their body temperature often mirrors the ambient temperature.

Unlike most fish species, whose flesh is white, the tunas generally have pink to dark red flesh due to elevated levels of myoglobin, a oxygen-binding molecule. The high concentrations of myoglobin in muscle tissue are another important factor supporting the tunas' ability to swim at high speeds. Tunas are important not only commercially, but also as sports fish, especially the bluefin tuna. Skipjack tunas, which can weigh up to 40 pounds, but are generally six to eight pounds, are also known as Arctic bonito and oceanic bonito and get their name because of a seeming ability to "skip" out of the water (Herbst 2001).

There are eight tuna species in the Thunnus genus:

Species of several other genera (all in the family Scombridae) have common names containing "tuna" and are part of the tribe Thunnini:

Two others outside the tribe Thunnini are sometimes considered tunas: 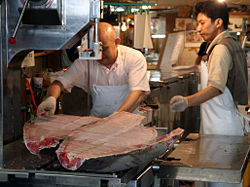 Tuna cut in half for processing at the Tsukiji fish market in Tokyo, Japan 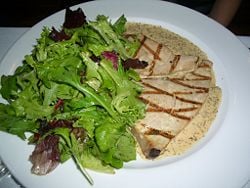 A grilled tuna steak served in a French bistro

Tuna has been an important commercial fish for centuries. It was first canned in 1903 and is now probably the most popular fish for canning. The best known tunas for canning are the albacore, bluefin, and yellowfin, with the high-fat albacore also having the lightest color flesh and being the only tuna whose meat can be called "white," although it is actually white with a hint of pink. Yellowfin tunas have a slightly stronger flavor than albacore and have pale pink flesh (labeled "light" not "white"). In bluefin tunas, the largest tunas, the young have a lighter and less strongly flavored flesh than the adults, whose flesh is dark red (Herbst 2001).

In addition to its major use for canning, tuna is sold as steaks, fillets to be cooked, and for consumption uncooked. The northern bluefin tuna is an important food fish used almost exclusively as raw meat for sashimi and sushi. Canned tuna is precooked, and packed in either water or oil, and sold in the three grades of flaked or grated (bits and pieces), chunk (small pieces), and solid or fancy (large pieces) (Herbst 2001).

According to Foodmarket Exchange, the total tuna catch in 2000 stood at 3,605,000 tons, down about 5.7 percent from 3,823,000 tons in 1999. The main tuna catching nations are concentrated in Asia, with Japan and Taiwan as the main producers. Other important tuna catching nations in Asia are Indonesia and South Korea. Spain and France also are important tuna fishing countries, mainly catching in the Mediterranean Sea and the Indian Ocean.

Increasing quantities of high-grade tuna are entering the market from operations that fatten tuna in net pens by feeding them such baitfish species as sardines, mackerel, herrings, and squid, often caught in fisheries far removed from the fish farming sites. The southern bluefin tuna, Thunnus maccoyii, is farmed in Australia, while its close relative, the northern bluefin tuna, Thunnus thynnus, is being fattened in farms in the Mediterranean Sea, the Gulf of Mexico, and coastal waters of Japan and Australia.

Due to their high position in the food chain and the natural accumulation of heavy metals up the food chain, some of the larger species of tuna, such as bluefin and albacore, can have relatively high levels of mercury. As a result, in March 2004, the United States Food and Drug Administration (FDA) issued guidelines recommending that pregnant women, nursing mothers, and children limit their intake of tuna and other types of predatory fish (USDHHS 2004). They noted, for example, that albacore ("white") tuna has more mercury than canned light tuna. Most canned light tuna is skipjack tuna, which is lower in mercury. The eastern little tuna (Euthynnus affinis) has recently come to market as a low-mercury, less expensive substitute for canned albacore.

Some varieties of tuna, such as the bluefin and bigeye tuna, Thunnus obesus, are threatened by overfishing, which has dramatically affected tuna populations in the Atlantic and northwestern Pacific Oceans. The fisheries of some other populations, such as the central and western Pacific skipjack tuna, Katsuwonus pelamis, seem to remain healthy.

There is mounting evidence that the accumulation of excess harvesting capacity threatens tuna fisheries worldwide. Furthermore, international agreement regulations in catch limits and size of nets (no larger than 2.4 kilometers or 1.5 miles) are not always observed. The Australian Government alleged in 2006, for example, that Japan had illegally overfished southern bluefin for years. At a meeting of the Commission for the Conservation of Southern Bluefin Tuna in 2006, the Japanese delegation admitted that its catch of southern bluefin tuna for 2005 was some 1,800 tons more than its 6,065-ton quota for that year and agreed to a halving of its quota to 3,000 tons per year for the five years beginning in 2007.[1]

The bluefin tuna of all three species—northern, southern, and Pacific—are overfished throughout the world. They are hooked on longlines or illegally netted everywhere they swim, and many young bluefins are captured before they reproduce and placed inside a fish farm enclosure where they are fattened for harvest. Creating effective fishing policies for bluefin tuna is difficult since they are highly mobile and swim through the territorial waters of many different nations.

Use of drift nets also captures seals, dolphins, whales, and birds. Many tuna species, such as yellowfin tuna, associate with dolphins, swimming along side them, with dolphins being caught by fishermen seeking tuna. Tuna species that do not normally associate with dolphins include albacore and skipjack. Methods of fishing tuna have become more "dolphin friendly," becoming less prone to entangle, injure, or kill dolphins. However, there is no universal independent inspection program or verification of "dolphin safeness" to show that dolphins are not harmed during tuna fishing. According to the Consumers Union, this gives the claims such as "dolphin safe" little credibility.