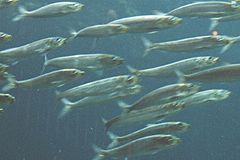 Sardines in the Pacific

Sardine is a common, but imprecise term applied broadly to various small, edible, oily fish within the herring family Clupeidae, and especially the young, half-grown pilchard, Sardina pilchardus. Sardines are thought to have been named after the island of Sardinia, where the pilchards were once found in abundance and were one of the first fish packed in oil for commercial sale (Herbst 2001).

While sardines are small fish, their abundance has made them valuable for humans and for marine ecosystems. For humans, they are commercially important and are an excellent source of nutrition, including high amounts of various vitamins and minerals, and a rich source of omega 3 fatty acids. Ecologically, they are important in food chains, consuming copepods and zooplankton and being eaten by larger fish (sharks, salmon, swordfish, etc.), spiny lobsters, birds, and marine mammals. Often packed tightly in cans for sale, they also provide an apt metaphor for crowded conditions in human society: "packed like sardines in a can."

The term sardine is not precise, and the usual meanings vary by region; for instance, to many people a "sardine" is a young European pilchard, Sardina pilchardus. The Food and Agricultural Organization (FAO)/World Health Organization (WHO) Codex standard for canned sardines cites 21 species that may be classed as sardines (FAO/WHO 1995). These fish are scattered over 11 genera, with ten of the species in the Sandinops and Sardinella genera (five in each genus), and three of the species in the Engraulis genus. FishBase, a comprehensive database of information about fish, lists at least six species called just "pilchard," over a dozen called just "sardine," and many more with the two basic names qualified by various adjectives.

Canned "sardines" in supermarkets may actually be sprats (such as the "brisling sardine", Sprattus sprattus) or round herrings. The actual sizes of the fish canned varies by species. Good quality sardines should have the head and gills removed before packing (FAO/WHO 1995). They also may be eviscerated before packing (typically the larger varieties). If not eviscerated, they should be free of undigested or partially digested food or feces (FAO/WHO 1995) (accomplished by holding the live fish in a tank for a long enough time that their digestive systems empty themselves). They may be packed in oil or some sort of sauce.

An open sardine can

Sardines are typically tightly packed in a small, flat can, the lid of which is scored for easy opening either with a pull tab, or a church key attached to the side of the can. Thus, it has the virtues of being an easily portable self-contained source of food, and often such things as sewing kits or survival kits are packed in a similar container.

The close packing of sardines in the can has led to their being used metaphorically for any situation where people or objects are crowded together; for instance a bus or subway car.

Croatia. Fishing for sardela or sardina (Sardina pilchardus) on the Croatian Adriatic coasts of Dalmatia and Istria is an ongoing activity tracing its roots back thousands of years. The region was part of the Roman Empire, then largely a Venetian dominion, and has always been sustained through fishing mainly sardines. All along the coast there are many towns that promote the age-old practice of fishing by latin-sail type boats for tourism and on festival occasions. Today, this tradition is also continued by many producers.

Portugal. Sardines play an important role in Portuguese culture. Having been a people who depended heavily on the sea for food and commerce, the Portuguese commonly have fish as part of their popular festivities. One of the most important is Saint Anthony's day, June 13, when the biggest popular festival takes place in Lisbon, taking the people to the streets where grilled sardines are the snack of choice. Almost every place in Portugal, from Figueira da Foz to Portalegre, or from Póvoa de Varzim to Olhão has the summertime popular tradition of eating grilled sardines (sardinhas assadas).

Spain (Canary Islands). In the Timanfaya Volcanic National Park on Lanzarote, a popular tourist menu is to eat sardines, freshly caught that morning, grilled over the heat from a volcanic vent.

United Kingdom (Cornwall). Pilchard fishing and processing was a thriving industry in Cornwall, United Kingdom from around 1750 to around 1880, after which it went into an almost terminal decline. The industry has featured in numerous works of art, particularly by Stanhope Forbes and other Newlyn School artists. Sardines on a plate

Sardines, considered "brain food," are an exceptionally rich source of vitamin B12 (cobalamin or cyanocobalamin) (Bender and Bender 2005), which is important for the normal functioning of the brain and nervous system and for the formation of blood. It is involved in the metabolism of every cell of the body, especially affecting the DNA synthesis and regulation but also fatty acid synthesis and energy production. Sardines also are a rich source of niacin, vitamin D, protein, calcium, and selenium, and a good source of vitamins B2, B6, iron, copper, and zinc, and a source of iodine (Bender and Bender 2005).

Retrieved from https://www.newworldencyclopedia.org/p/index.php?title=Sardine&oldid=724049
Categories:
Hidden category:
This page was last edited on 2 June 2008, at 15:35.
Content is available under Creative Commons Attribution/Share-Alike License; additional terms may apply. See Terms of Use for details.