Herring is the common name for any of the various fish comprising the Clupeiformes family Clupeidae, a large family that includes many of the most important food fishes in the world, including the European pilchard (true sardine), Atlantic menhaden, Atlantic herring, Pacific herring, Baltic herring, and the American or Atlantic shad. Although primarily marine, a number of species are freshwater, and some, like the American shad, are anadromous, migrating from their saltwater habitat to freshwater to spawn (Nelson 1994; Herbst 2001). Generally five subfamilies are recognized, with about 66 genera and 216 species (Agbayani 2004). Most members of Clupeidae are small fish and form schools.

While herring generally is the term used for members of the family (Nelson 1994; Agbayani 2006; ITIS 2004a; Herbst 2001), the term sometimes is used more specifically to refer to members of the subfamily Clupeinae (ITIS 2004b), which also includes sardines, or the genus Clupea (true herrings). This article will focus on the entire herring family.

Herring are among the most important fish groups on the planet. They are the dominant converter of the enormous production of zooplankton, utilizing the biomass of copepods, mysids, and krill in the pelagic zone. Small herring also feed on phytoplankton, and large herrings feed on small fish and fish larvae. On the other side of the food chain, they are a central prey item for higher trophic levels, including seabirds, dolphins, pinnipeds, whales, sharks, swordfish, tuna, cod, salmon, and numerous other large fish.

For humans, they also are very important, being harvested for their nutritious meat and eggs. They have been a known staple food source since 3000 B.C.E. In The Netherlands, herring have played a major role in historical and economic development dating back to the fourteenth century. Sometimes moving in vast schools, herrings are caught, salted, and smoked in great quantities. These values reflect the concept of bi-level functionality, whereby herrings not only advance a function for the individual (survival and reproduction of the species, etc.) but also provide a benefit for the ecosystem and human beings.

Underwater video (looping) of a school of Atlantic herring (Clupea harengus) on its migration to spawning grounds in the Baltic Sea.

Clupeidae is a primarily marine (some freshwater and some anadromous) assemblage of herrings (shads, sprats, sardines, pilchards, and menhadens) (Nelson 1994). Members of the family have a single dorsal fin and tend to be silvery colored fish. Unlike most other fish, they have soft dorsal fins that lack spines, though some species have pointed scales that form a serrated keel. They have no lateral line and have a protruding lower jaw. Members of this family are characterized by absent or small teeth; two long, rod-like postcleithra in most; slender shape; and an anal fin usually with 12-29 rays, but up to 38 in members of the subfamily Dussumieriinae (Nelson 1994).

Members of most species form schools and are found near the surface feeding on plankton (Nelson 1994).

The herrings are placed into 66 genera and 216 species (Agbayani 2004). Nelson (1994) notes that about 50 of the species are freshwater, occasionally entering brackish water, while others are anadromous or otherwise extend into freshwater, but most are marine. Most of the freshwater species are in Africa (Nelson 1994).

Slow-motion macrophotography video (50 percent) of juvenile Atlantic herring (38 mm) feeding on copepods. The fish approach from below and catch each copepod individually.

Young herring feed on phytoplankton and as they mature they start to consume larger organisms. Adult herring feed on zooplankton, tiny animals that are found in oceanic surface waters, and small fish, and fish larvae. Copepods and other tiny crustaceans are the most common zooplankton eaten by herring.

During daylight herring stay in the safety of deep water, feeding at the surface only at night when there is less chance of predation. They swim along with their mouths open, filtering the plankton from the water as it passes through their gills.

Herring are an important economic fish. Adult fish are harvested for their meat and eggs. The most important commercial species include: 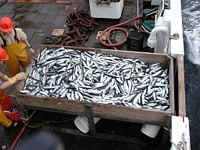 Herring has been a known staple food source since 3000 B.C.E. There are numerous ways the fish is served and many regional recipes: eaten raw, fermented, pickled, or cured by other techniques. The fish was sometimes known as "two-eyed steak."

Herring are very high in healthy long-chain Omega-3 fatty acids (Mayo 2008), EPA, and DHA. They are a source of vitamin D. Large Baltic herring slightly exceeds recommended limits with respect to PCB and dioxin. Nevertheless, the health benefits from the fatty acids generally are considered more important than the theoretical risk from dioxin; their cancer-reducing effect is statistically stronger than the cancer-causing effect of PCB's and dioxins (Evira 2006a). The contaminant levels depend on the age of the fish, which can be inferred from their size. According to recommendations of the Finish Food Safety Authority, Baltic herrings larger than 17 centimeters may be eaten twice a month, while herrings smaller than 17 centimeters may be eaten freely (Envira 2006b). 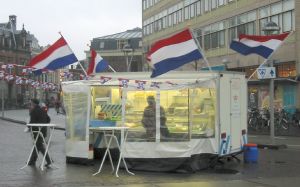 Pickled herring is a delicacy popular in Europe and has become a basic part of Jewish cuisine. Most cured herring uses a two-step curing process. Initially, herring is cured with salt to extract water. The second stage involves removing the salt and adding flavorings, typically a vinegar, salt, sugar solution to which ingredients like peppercorn, bay leaves and raw onions are added.

In Scandinavia, once the pickling process is finished and depending on which of the dozens of classic herring flavorings are selected, it is usually enjoyed with dark rye bread, crisp bread, or potatoes. This dish is popular at Christmas and Midsummer, where it is enjoyed with akvavit. In Iceland, a blald is a young pickled herring given to a child as a special holiday treat.

Pickled herrings are also common in Ashkenazi Jewish cuisine, perhaps best known for forshmak salad known in English simply as "chopped herring." Pickled herring can also be found in the cuisine of Hokkaidō in Japan, where families traditionally preserved large quantities for winter.

The word rollmops, borrowed from German, refers to a pickled herring fillet rolled (hence the name) into a cylindrical shape around a piece of pickled cucumber or an onion.

In Sweden, Baltic herring is fermented to make surströmming. 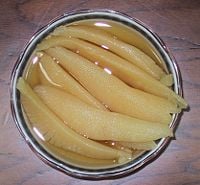 A typical Dutch delicacy is raw herring (Hollandse Nieuwe). This is typically eaten with raw onions. Hollandse nieuwe is only available in spring when the first seasonal catch of herring is brought in. This is celebrated in festivals such as the Vlaardingen Herring Festival. The new herring are frozen and enzyme-preserved for the remainder of the year.

Herring is also canned and exported by many countries. A sild is an immature herring that are canned as sardines in Iceland, Sweden, Norway or Denmark.

Very young herring are called whitebait and are eaten whole as a delicacy.

A kipper is a split and smoked herring, a bloater is a whole smoked herring, and a buckling is a hot smoked herring with the guts removed. All are staples of British cuisine. According to George Orwell in The Road to Wigan Pier, the Emperor Charles V erected a statue to the inventor of bloaters.

In Scandinavia, herring soup is also a traditional dish.

In Southeast Alaska, western hemlock boughs are cut and placed in the ocean before the herring arrive to spawn. The fertilized herring eggs stick to the boughs, and are easily collected. After being boiled briefly the eggs are removed from the bough. Herring eggs collected in this way are eaten plain or in herring egg salad. This method of collection is part of Tlingit tradition.

Figuratively, a red herring is a false lead in a mystery. In this context, red means smoked, and a smoked herring has such a strong smell that it can be used to create a false scent that causes hunting dogs to lose a track.

Species in the Clupea genus