Swordfish is the common name for a large, highly migratory, predatory marine fish, Xiphias gladius, characterized by a long, flat bill, the lack of pelvic fins, and an absence of scales and teeth in adults. They are the sole member of their family Xiphiidae. They are found worldwide in oceans, including the Pacific, Atlantic, and Indian Oceans, generally with a latitudinal range between 45°S and 60°N (Gardieff 2008).

In addition to the role in marine food chains, swordfish are well known for recreational fishing and cuisine, and their beauty, grace, and behavior adds to the mystery and wonder of nature. However, there also are concerns about their conservation status, due to overfishing, and mercury contamination has led to warnings about overconsumption (EPA 2004). Campaigns to bring awareness to the plight of this species have led to some reduction in their availability and their popularity in cuisine (see conservation status).

Suborder and family placement and characteristics

The various billfishes (sailfishes, swordfish, marlins, and spearfishes) are generally separated into two families, the Xiphidae and Istiophoridae, with the swordfish (Xiphias gladius) the only extant member of Xiphiidae, and the other billfishes placed within three genera within Istiophoridae (ITIS 2004; Agbayani 2008a). The three genera placed in Istiophoridae are Istiophorus (sailfishes), Tetrapturus (spearfishes), and Makaira (marlins) (Nelson 1994; ITIS 2004).

A notable characteristic of the billfishes is the remarkable ability to practice a form of endothermy, a type of warm-bloodedness where an elevated body temperature is maintained through internal means. Billfish exhibit a type of endothermy known as cranial endothermy whereby only the brain and eyes are warmed (Nelson 1994; Block et al. 1993). They remain "cold-blooded" (specifically poikilothermic) in that they do not maintain constant internal temperatures and the temperature often mirrors the ambient temperature. But by being able to raise the temperature of their brains and eyes, they can have faster eye movements when hunting, which is valued when diving deep into the ocean where the water is very cold.

What distinguishes the swordfish in Xiphiidae from other billfishes in Istiophoridae is the swordfish's lack of scales and teeth in the adult, the lack of pelvic fins, the presence of 26 vertebrae, and the shape of the bill, which is depressed (Nelson 1994). The other billfish (Istiophoridae) have scales and teeth in the adult, have elongate pelvic fins, have 24 vertebrae, and a rounded bill (Nelson 1994). Most prominent in the Istiophoridae is the dorsal fin, which has a very long base, which is sail-like in some species, and is depressible into groove (Nelson 1994, p. 428). Swordfish have a relatively small dorsal fin.

The swordfish is named after its sharp bill, resembling a sword (Latin gladius), which together with its streamlined physique allows it to cut through the water with great ease and agility. Contrary to belief, the "sword" is not used to spear prey, but rather it is used to stun prey by slashing back and forth (Nelson 1994, p. 428). Mainly the swordfish relies on its great speed and agility in the water to catch its prey. One possible defensive use for the sword-like bill is for protection from its few natural predators. The shortfin mako shark is one of the rare sea creatures big enough and fast enough to chase down and kill an adult swordfish, but they do not always win, since sometimes in the struggle with a shark a swordfish can kill it by ramming it in the gills or belly.

Swordfish grow very large, reaching a maximum size of 177 inches (455 centimeters) and 1,400 pounds (650 kilograms) (Gardieff 2008). The International Game Fish Association's all-tackle angling record for a swordfish is a 1,182 pound (536.15 kg) specimen taken off Chile in 1953. Female swordfish grow larger than males, with fish over 300 pounds (135 kilograms) mostly being female (Gardieff 2008). Females mature at four to five years of age in northwest Pacific while males mature first at about three to four years.

While swordfish are cold-blooded animals, they have special organs next to their eyes to heat their eyes and also their brain (Hopkin 2005; Fritsches 2005). Temperatures of ten to 15 C° above the surrounding water temperature have been measured (Fritsches 2005). The heating of the eyes greatly improves the vision, and subsequently improves their ability to catch prey. Out of the 25 000+ species of bony fish, only about 22 are known to have the ability to heat selected body parts above the temperature of the surrounding water. These include the swordfish, marlin, and tuna.

Swordfish are not schooling fish. They swim alone or in very loose aggregations, separated by as much as ten meters from a neighboring swordfish. They are frequently found basking at the surface, airing their first dorsal fin. Boaters report this to be a beautiful sight, as is the powerful jumping for which the species is known. This jumping, also called breaching, is thought by some researchers to be an effort to dislodge pests, such as remora or lampreys. It could also be a way of surface feeding by stunning small fish as they jump out of the water, making the fish more easily captured for food.

Adult swordfish forage includes pelagic fish, including small tuna, dorado, barracuda, flying fish, and mackerel, as well as benthic species of hake and rockfish. Squid are important when available. Swordfish feed daily, most often at night when they rise to surface and near-surface waters in search of smaller fish. They have been observed moving through schools of fish, thrashing their swords to kill or stun their prey and then quickly turning to consume their catch.

Adults swordfish have few natural enemies, with the exception of large sharks and sperm and killer whales. While swordfish are thought to have few predators, juveniles are vulnerable to predation by large pelagic fish.

In warmer equatorial waters, spawning occurs years round, such as in the Caribbean Sea, Gulf of Mexico, and the Florida coast; in cooler regions it occurs in the spring and summer (Gardieff 2008). Off the coast of Italy in the Mediterranean is the most recognized spawning site and there the height of spawning is in July and August (Gardieff 2008). In the North Pacific, batch spawning occurs in water warmer than 24°C from March to July and year-round in the equatorial Pacific. 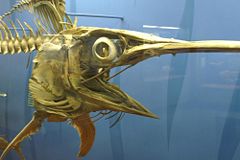 In addition to importance in marine food chains, swordfish provide culinary and recreational value. Commercially, swordfish were harvested by a variety of methods at small scale until the global expansion of long-line fishing. Longline gear can be targeted to a variety of fish, but bycatch remains a significant problem. 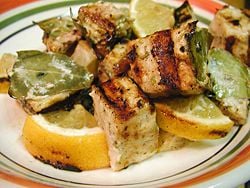 Swordfish is a particularly popular fish for cooking. Since swordfish are large animals, meat is usually sold as steaks, which are often grilled. The color of the flesh varies by diet, with fish caught on the east coast of North America often being rosier.

However, there is concern about potential toxicity from high levels of methylmercury in swordfish (EPA 2004; FDA 2004). A 2004 advisory from the United States Food and Drug Administration (FDA) recommended that women who are pregnant or who may become pregnant and young children do not eat swordfish (FDA 2004).

Swordfish are vigorous, powerful fighters. Novice anglers often mistake the swordfish for a sailfish, with which it shares a striking resemblance. However, in addition to the differences noted above, with the dorsal fin being particularly obvious to observers, the sailfishes are relatively weak and can be caught on light tackle. Experienced angles remark that pound for pound, the swordfish are perhaps the strongest fish in the sea. When hooked or harpooned, they have been known to dive so quickly that they have impaled their swords into the ocean bottom up to their eyes. Although there are no reports of unprovoked attacks on humans, swordfish can be very dangerous when harpooned. They have run their swords through the planking of small boats when hurt.

Recreational swordfishing throughout the world, and especially in South Florida, has gained tremendous popularity. With the ban on longlining along parts of the eastern seashore, swordfish populations are showing signs of recovery. The recovery is far from complete and is not a fraction of what it was in the '70s when recreational swordfish was discovered off the coast of South Florida.

Swordfish is not listed as an endangered species. The 2007 IUCN Red List of Threatened Species lists the swordfish conservation status as "data deficient," with the last assessment in 1996 (Safina 1996).

In 1998, the Natural Resources Defense Council and SeaWeb hired Fenton Communications to conduct an advertising campaign to promote their assertion that the swordfish population was in danger due to its popularity as a restaurant entree (FC 2008). The resulting "Give Swordfish a Break" promotion was wildly successful, with 750 prominent US chefs agreeing to remove North Atlantic swordfish from their menus. The advertising campaign was repeated by the national media in hundreds of print and broadcast stories, as well as extensive regional coverage. It earned the Silver Anvil award from the Public Relations Society of America as well as Time magazine's award for the top five environmental stories of 1998. Subsequently, the National Marine Fisheries Service proposed a swordfish protection plan that incorporated the campaign's policy suggestions. Then-President Clinton called for a ban on the sale and import of swordfish and in a landmark decision by the federal government, 132,670 square miles of the Atlantic ocean were placed off-limits to fishing as recommended by the sponsors (FC 2008).