Mackerel is a common name for various swift-moving, marine fish of the Scrombidae family of the Perciformes order, with the exception of the similar, but deeper-bodied tunas (tribe Thunnini) and the bonitos (tribe Sardini) that are also part of the same family. Mackerels, and all of the members of the Scrombidae family, are characterized by a long, slender, streamlined body; deeply forked tails; a very narrow portion of body right before the tail; and finlets behind the second dorsal and the anal fins. The term mackerel is also applied to all members of the Scrombidae family, which is sometimes known as the mackerel family. Furthermore, the term also is used as a common name for various other fish in other families, such as the jack mackerels in the Carangidae family in the same Perciformes order.

Mackerels are part of the Scrombridae family of the Suborder Scrombroidei. The family includes mackerels, tunas, and bonitos. The suborder includes also barracudas, snake mackerels (family Gempylidae), and cutlassfishes (Nelson 1994).

Within the family, Nelson (1994) recognizes two subfamilies: Gasterochismatinae, with just one species (Gasterochisma melampus, the bigscale mackerel or butterfly mackerel) and Scombrinae (with 14 genera of mackerels, tunas, and bonitas). The tunas are placed in the Thunnini tribe and bonitos in the Sardinia tribe.

Mackerels can be found in all tropical and temperate seas. Most live offshore in the oceanic environment, but a few, like the Spanish mackerel (Scomberomorus maculatus), enter bays and can be caught near bridges and piers.

Among well-known species of mackerel are the king mackerel, Atlantic mackerel, and the blue mackerel.

The king mackerel, Scomberomorus cavalla, is the largest species called mackerel. It can grow to 66 inches (1.68 meters). It is a migratory species that lives its entire life in the open waters of the western Atlantic Ocean and Gulf of Mexico. It is an important species to both the commercial and recreational fishing industries. King mackerel commonly occur in depths of 40 to 150 feet (12–45 m), where the principal fisheries occur. Larger kings (heavier than 20 lb or nine kg) often occur inshore, in the mouths of inlets and harbors, and occasionally even at the 600 foot (180 m) depths at the edge of the Gulf Stream.

The Atlantic mackerel, Scomber scombrus, is a pelagic schooling species of mackerel found on both sides of the North Atlantic Ocean. The species is also called Boston mackerel or just mackerel. It is an important food fish. Although Atlantic mackerel have been somewhat depleted in the waters around Europe, the Atlantic mackerel population apparently persists at abundant levels in U.S. waters despite being overfished in the 1970s.

The blue mackerel, Japanese mackerel, or Pacific mackerel, Scomber australasicus, is found in tropical and subtropical waters of the Pacific ocean, the Red Sea, and the Gulf of Oman and the Gulf of Aden, in surface waters down to 650 feet (200 meters). It is one of the smallest members of the mackerel family, attaining a length of 12 to 20 inches (20 to 55 cm) and a weight of about 2.2 pounds (one kilogram). The first dorsal fin is triangular, the second much lower followed by serrated finlets to the deeply forked tail. The body is fully scaled. There is a single row of sharp teeth in each jaw, the ones in the lower being larger. There is a swim bladder present. 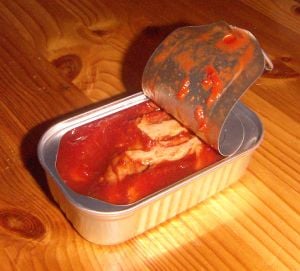 Mackerel fillet in tomato sauce, a popular food in Scandinavia and the UK.

Mackerel are prized as a food fish and for recreational sports fishing. They are the base of an important commercial fishery.

As a food fish, the meat of mackerels tends to be oily. It is rich in protein and vitamins D, B2, B6, and B12, as well as niacin, copper, iodine, and selenium (Bender and Bender 2005). It also are a source of iron and vitamin B1. Atlantic mackerel is extremely high in vitamin B12, and is also very high in omega 3, containing nearly twice as much per unit weight as does salmon. Unlike King mackerel and Spanish mackerel, Northern Atlantic mackerel are very low in mercury, and can be eaten at least twice a week according to United States Environmental Protection Agency (EPA) guidelines.

The king mackerel has a high-fat flesh with a pleasant savory flavor, making it quite popular (Herbst 2001). As of 2005, king mackerel are primarily marketed fresh. They may be sold as fillets, steaks, or in the round (whole). Their raw flesh is grayish, due to its high fat content, They are generally prepared by broiling, frying, baking, or, especially for a large "smoker" king, by smoking. However, according to the EPA, king mackerel is one of the four fish that children and women of child-bearing age should avoid due to high levels of methylmercury found in these fish.

Atlantic mackerel are sought after for food either cooked or as sashimi.

Mackerel can spoil quickly, especially in the tropics, causing scombroid food poisoning; it should be eaten on the day of capture, unless cured. For this reason, mackerel is the only fish traditionally sold on a Sunday in London, and is the only common salt-cured sushi. Mainly in Scandinavia, canned mackerel in tomato sauce is commonly used as sandwich filling.

Mackerel, like the tunas, are important in food chains, consuming fish, plankton, and mollusks, and being consumed by sharks, rays, billfishes, larger tunas, and toothed whales. The blue mackerel feeds upon copepods and other crustaceans, squid, and small fish.

Scombridae is the "mackerel family," placed within the Scombroidei subfamily of the Perciformes order.

Gempylidae, the snake mackerels, is a family of oblong or elongate and compressed marine fish also within the Scombroidei subfamily (Nelson 1994). They are often found in very deep water.

Carangidae is a family of fish that is part of the order Perciformes, but not the suborder Scombroidei. It includes the jacks, pompanos, jack mackerels, and scads. Jack mackerels are marine fishes in the Trachurus genus of the Carangidae family. The genus contains many important commercial and game fish, such as the Pacific jack mackerel, Trachurus symmetricus.

Hexagrammidae are part of the Scorpaeniformes order.

Use as an adjective

"Mackerel" is also used as an adjective in the vernacular names of other animals or breeds thereof, often used to indicate types with a mackerel-like pattern of vertical stripes: