Niacin, also known as nicotinic acid or vitamin B3, is a vitamin whose derivatives NAD, NADH, NAD+, and NADP play essential roles in energy metabolism in the living cell and DNA repair. The designation vitamin B3, whose chemical formula is C5H4NCOOH (or alternatively, C6H6NO2), also includes the corresponding amide nicotinamide, or niacinamide, whose chemical formula is C6H6N2O.

Niacin is one of the B vitamins (vitamin B complex), a group of chemically distinct, water-soluble vitamins that also includes thiamine, riboflavin, pantothenic acid, biotin, pyridoxine, folic acid, and others. Once considered to be a single vitamin, vitamin B is now seen as a complex of different vitamins that generally are found in the same foods. Vitamins are organic (carbon-containing) nutrients obtained through the diet and essential in small amounts for normal metabolic reactions.

The conversion of niacin to NAD and NADP, and the use of these coenzymes in intricate biological processes like the citric acid cycle, reveals the complex coordination in living organisms.

Niacin is found in meat, fish, nuts, green vegetables, and yeast, among other sources. Niacin deficiency results in pellagra, reflecting the need for good and varied nutrition. 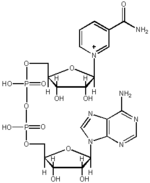 Both nicotinic acid and nicotinamide are used to form the coenzymes NAD and NADP, which are important cofactors found in cells.

Many enzymes require niacin coenzymes NAD and NADP. Though differing by only a single phosphate group, NAD and NADP have distinct functions in biochemistry. NAD (NADH) is used extensively in catabolism of carbohydrates, fats, proteins, and alcohol to produce energy. Thus, it is prominent in glycolysis and the citric acid cycle of cellular respiration. In contract, NADP (NADPH) is utilized in anabolic reactions (biosynthesis), such as synthesis of nucleic acids, fatty acids, and cholesterol (Higdon 2002).

In synthesizing NAD+, nicotiniamide is joined with ribose and ADP to form NAD+. From NAD+, the addition of a phosphate group to the 2' position of the adenyl nucleotide through an ester linkage forms NADP+.

NAD (and niacin) may also be synthesized in the liver from the amino acid tryptophan (Hidgon 2002).

Severe lack of niacin causes the deficiency disease pellagra, whereas a mild deficiency slows down the metabolism decreasing cold tolerance. The symptoms of pellagra include high sensitivity to sunlight, aggression, dermatitis, red skin lesions, insomnia, weakness, mental confusion, diarrhea, and dementia (eventually). Overall, the main results of pellagra can easily be remembered as "the four D's": diarrhea, dermatitis, dementia, and death. Untreated, the disease can kill within four or five years.

Extremely high doses of niacin can cause niacin maculopathy, a thickening of the macula and retina, which leads to blurred vision and blindness (Gass 1973).

Niacin in itself is not toxic, but the chemicals converted by niacin are toxic to the skin and liver in overdose, and high doses of niacin should only be reached with gradual increase. Studies in laboratory animals have demonstrated behavioral changes when large doses of niacin are given (Sullivan 1958).

A deficiency of niacin can be caused by inadequate dietary intake of niacin or inadequate intake of the amino acid tryptophan, which can be converted into niacin, although the conversion rate is low (Hidgon 2002).

Vitamin B3 is also referred to as "vitamin PP," a name derived from the obsolete term "pellagra-preventing factor."

The liver can synthesize niacin from the essential amino acid tryptophan, but the synthesis is extremely slow; 60 milligrams of tryptophan are required to make one milligram of niacin (Higdon 2002). Biosynthesis of niacin from tryptophan requires both vitamin B6 and riboflavin.

Dietary niacin deficiency has been prominent historically in areas where people eat corn, a grain that is low in niacin, as a staple food, and that don't use lime during maize (corn) meal/flour production. While corn contains appreciable amounts of niacin, it is chemically bound in a form that is not nutritionally available to humans (Higdon 2002). Alkali lime releases the tryptophan from the corn so that it can be absorbed in the gut and converted to niacin (UMMC 2004).

Niacin plays an important role in the production of several sex and stress-related hormones, particularly those made by the adrenal gland. It also plays a role in removing toxic and harmful chemicals from the body (UMMC 2004).

When taken in large doses, niacin increases the level of high density lipoprotein (HDL) or "good" cholesterol in blood, and is sometimes prescribed for patients with low HDL, and at high risk of heart attack (McGovern 2005). Niacin (albeit not niacinamide) is also used in the treatment of hyperlipidemia because it reduces very low density lipoprotein (VLDL), a precursor of low density lipoprotein (LDL) or "bad" cholesterol, secretion from the liver, and inhibits cholesterol synthesis (Trevor et al. 2005). The main problem with the clinical use of niacin for dyslipidemia is the occurrence of skin flushing, even with moderate doses (NLM and NIH 2005).

There are current attempts to create a prolonged-release formulation of the substance, to allow it to be used more often and more comfortably (Barter 2006).

Nicotinic acid reacts with hemoglobin and myoglobin in meat to form a brightly colored complex, and thus has been used as a food additive, typically to improve the color of minced (ground) meat. Niacin is licensed as a food coloring agent in some countries.