The Niagara Escarpment is a long, precipitous, cliff-like ridge of land or rock in the United States and Canada that runs westward from New York State, through Ontario, Michigan, Wisconsin, and Illinois. The escarpment is most famous for the cliff over which the Niagara River forms Niagara Falls, for which it is named.

The Niagara Escarpment is the most prominent of several escarpments formed in the bedrock of the Great Lakes. It is traceable from its easternmost point in New York State, starting well east of the Genesee River Valley near Rochester, creating waterfalls on the river in that city, then running westwards to the Niagara River forming a deep gorge between Lewiston, New York and Queenston, Ontario. In Southern Ontario it stretches along the Niagara Peninsula hugging close to the Lake Ontario shore through the cities of St. Catharines and Hamilton, where it takes a sharp turn north toward Georgian Bay. It then follows the Georgian Bay shore northwestwards to form the spine of the Bruce Peninsula, Manitoulin, St. Joseph Island, and other islands located in northern Lake Huron where it turns westwards into the Upper Peninsula of northern Michigan, south of Sault Ste. Marie. It then extends southwards into Wisconsin following the Door Peninsula and then more inland from the western coast of Lake Michigan and Milwaukee ending northwest of Chicago near the Wisconsin-Illinois border.

In 1990, the Niagara Escarpment was designated a World Biosphere Reserve by the UNESCO.

A section of escarpment cliff, seen from the Bruce Trail in Ontario 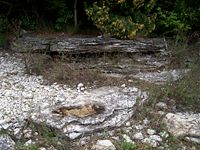 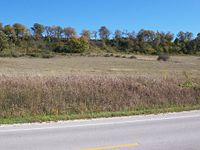 Studies of rock exposures and drillholes demonstrate that there is no displacement of the rock layers at the escarpment. Thus, it is not a fault line but the result of unequal erosion. The Niagara Escarpment has a caprock of dolomitic limestone ("dolostone") which is more resistant and overlies weaker, more easily eroded shale as a weathering-resistant "cap." In other words, the escarpment formed over millions of years through a process of differential erosion of rocks of different hardnesses. Through time, the softer rocks weathered away or eroded by the action of streams.

The gradual removal of the soft rocks undercut the resistant caprock, leaving a cliff or escarpment. The erosional process is most readily seen at Niagara Falls, where the river has quickened the process. It can also be seen on the three waterfalls of the Genesee River at Rochester, New York (additional resistant rock layers make more than one escarpment in some places). Also, in some places thick glacial deposits conceal the Niagara Escarpment, such as north of Georgetown, Ontario, where it actually continues under glacial sediment and reappears farther north.

The escarpment's dolostone cap was laid down as sediment on the floor of a marine environment. In Michigan, behind the escarpment, the capstone slopes gently to form a wide basin, the floor of an Ordovician-Silurian tropical sea. There the constant depositing of minute shells and fragments of biologically generated calcium carbonate mixed with sediment washed in by the erosion of the virtually lifeless landmasses which eventually formed a limestone layer. In the Silurian, some magnesium substituted for some of the calcium in the carbonates, slowly forming harder sedimentary strata in the same fashion. Worldwide sea levels were at their all-time maximum in the Ordovician; as the sea retreated, erosion inevitably began.

The Welland Canal, running 27 miles from Port Colborne on Lake Erie to Port Weller on Lake Ontario, allows ships traversing the Niagara Escarpment to bypass Niagara Falls. The escarpment was a major obstacle in the construction of the Erie Canal in New York and was traversed by a series of locks; the community that grew up at the site thus became known as Lockport, New York.

In Southern Ontario, the Bruce Trail runs the length of the escarpment from Queenston (Niagara Peninsula) to Tobermory (Bruce Peninsula).

Hamilton, Ontario is situated on the escarpment in such a way that the north end of the city is below and the south end partly above the escarpement. Affectionately referred to as "the mountain" by its residents, the escarpment is both an attraction and a hindrance to everyday life. Bridging the divide are a number of roads or "mountain accesses" that separate the urban core below from the suburban expansion above.

The Ontario Greenbelt is a permanently protected area of green space, farmland, forests, wetlands, and watersheds, that wraps around the western end of Lake Ontario in Canada. Its most prominent land features include the Niagara Escarpment, the Oak Ridges Moraine, and the Rouge Park. The Greenbelt extends 202 miles from Rice Lake in Northumberland County to the Niagara River. It encompasses a significant portion of Canada's most populated and fastest-growing area—"The Golden Horseshoe"—where the population is expected to increase from almost eight million to about 11 million people over the next 30 years.

Farming is the dominant land use in the Greenbelt and farmers are the dominant land owners at just over 50 percent. The Greenbelt’s natural heritage system protects about 535,000 acres of lakes, wetlands, river valleys, and forests. Habitat is protected for wildlife and endangered species within a continuous band of green countryside. Open space is maintained for tourism, recreation, and healthy living. Over half of the people living in central Ontario are likely to take advantage of the tourism and recreation possibilities of the Greenbelt—hiking, camping, skiing, fruit-picking, wine-tasting, holiday tours, spas, and more.

The Oak Ridges Moraine is a large ridge composed of four elevated wedges. It is bounded to the west by the Niagara Escarpment, which was critical to the formation of the moraine, (which is defined as a ridge, mound, or irregular mass of unstratified glacial drift, comprised chiefly boulders, gravel, sand, and clay) and to the east by the Trent River and Rice Lake. The ecologically diverse moraine is the source for many headwater streams flowing south into rivers that drain into Lake Ontario and north into rivers that drain into Lake Scugog and Lake Simcoe. 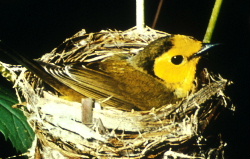 The Hooded Warbler is a threatened species in Canada. Happy Valley Forests is one of the few remaining Canadian habitats for this species.

Some of the wide variety of plant and animal species found in the moraine are species at risk in Canada and Ontario, including the West Virginia White Butterfly, Jefferson Salamander, Red-shouldered Hawk, and American Ginseng. The Hooded Warbler is a threatened species in Canada. Happy Valley Forests is one of the few remaining Canadian habitats for this species.

Unique ecosystems in the moraine include wetlands similar to those of arboreal forests in Northern Ontario, and remnants of tallgrass prairie and oak-pine savanna that are globally threatened ecosystems. A typical portion of the moraine may be found in the Happy Valley Forests, in the York Region, north of Toronto.

On the Canadian side of the border the Niagara Escarpment is a group-sub-appellation comprising the Short Hills Bench, the 20 Mile Bench, and the Beamsville Bench. On the American side of the border the name defines an American Viticultural Area. The soils of the area are particularly conducive to grape-growing. Fruit from this region is obtained by many wineries in Niagara and Ontario.

Retrieved from https://www.newworldencyclopedia.org/p/index.php?title=Niagara_Escarpment&oldid=1087381
Categories:
Hidden category:
This page was last edited on 14 November 2022, at 23:26.
Content is available under Creative Commons Attribution/Share-Alike License; additional terms may apply. See Terms of Use for details.