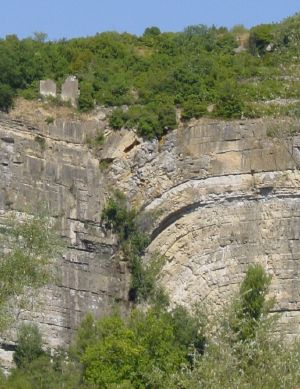 In geology, a fault (or fault line) is a planar rock fracture that shows evidence of relative movement. Given that faults do not usually consist of a single, clean fracture, the term fault zone is used when referring to the zone of complex deformation associated with the fault plane.

Large faults within the Earth's crust are the result of differential or shear motion, and active fault zones are the causal locations of most earthquakes. Earthquakes are caused by energy release during rapid slippage along a fault. A fault that runs along the boundary between two tectonic plates is called a transform fault.

The sense of slip (main sense of movement) is defined by the relative movements of geological features present on either side of the fault plane. The sense of slip defines the type of fault. This is distinct from the throw of the fault, which is the vertical offset. Heave is the measured horizontal offset of the fault.

The sense of slip is a vector, which can be qualitatively measured by fault bend folding, that is, drag folding of strata on either side of the fault. The direction and magnitude of heave and throw can be measured only by finding common intersection points on either side of the fault. In practice, it is usually possible to find only the slip direction of faults, and an approximation of the heave and throw vector.

Creation and behavior of faults 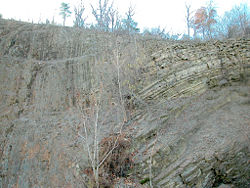 The Junction fault, dividing the Allegheny Plateau and the true Appalachian Mountains in Pennsylvania.

The creation and behavior of faults, in both an individual small fault and within the greater fault zones that define the tectonic plates, is controlled by the relative motion of rocks on either side of the fault surface.

Because of friction and rigidity of the rock, the rocks cannot simply glide or flow past each other. Rather, stress builds up in rocks, and when it reaches a level that exceeds the strain threshold, the accumulated potential energy is released as strain, which is focused into a plane along which relative motion is accommodated—the fault.

Strain is both accumulative and instantaneous, depending on the rheology of the rock. The ductile lower crust and mantle accumulates deformation gradually via shearing whereas the brittle upper crust reacts by fracture, or instantaneous stress release to cause motion along the fault. A fault in ductile rocks can also release instantaneously when the strain rate is too great. The energy released by instantaneous strain release is the cause of earthquakes, a common phenomenon along transform boundaries.

Microfracturing, or microseismicity, is sometimes thought of as a symptom caused by rocks under strain, where small-scale failures (perhaps on areas the size of a dinner plate) release stress under high-strain conditions. It is only when sufficient microfractures link up into a large slip surface that a large seismic event or earthquake can occur.

According to this theory, after a large earthquake, the majority of the stress is released and the frequency of microfracturing is exponentially lower. A related theory, accelerating moment release (AMR), hypothesizes that the seismicity rate accelerates in a well-behaved way prior to large earthquakes, and may be a promising tool for earthquake prediction on the scale of days to years.

This is being increasingly used to predict rock failures within mines and applications are being attempted for the portions of faults within brittle rheological conditions. Similar behaviour is observed in the tremors preceding volcanic eruptions.

For all naming distinctions, it is the orientation of the net dip and sense of slip of the fault which must be considered, not the present-day orientation, which may have been altered by local or regional folding or tilting.

Dip-slip faults can be further subdivided into the types "reverse" and "normal." A normal fault occurs when the crust is extended. Alternatively such a fault can be called an extensional fault. The hanging wall moves downward, relative to the footwall. A downthrown block between two normal faults dipping towards each other is called a graben. An upthrown block between two normal faults dipping away from each other is called a horst. Low-angle normal faults with regional tectonic significance may be designated detachment faults.

A reverse fault is the opposite of a normal fault. The hanging wall moves up relative to the footwall. Reverse faults are indicative of shortening of the crust. The dip of a reverse fault is relatively steep, greater than 45°.

A thrust fault has the same sense of motion as a reverse fault, but with the dip of the fault plane at less than 45°. Thrust faults typically form ramps, flats and fault-bend (hanging wall and foot wall) folds. Thrust faults are responsible for forming nappes and klippen in the large thrust belts.

Fault-bend folds are formed by movement of the hangingwall over a non-planar fault surface and are found associated with both extensional and thrust faults.

Faults may be reactivated at a later time with the movement in the opposite direction to the original movement (fault inversion). A normal fault may therefore become a reverse fault and vice versa. 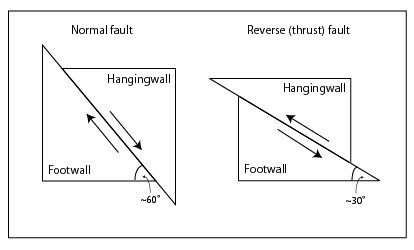 The fault surface is usually near vertical and the footwall moves either left or right or laterally with very little vertical motion. Strike-slip faults with left-lateral motion are also known as sinistral faults. Those with right-lateral motion are also known as dextral faults. A special class of strike-slip faults consists of the transform fault, which are a plate tectonics feature related to spreading centers such as mid-ocean ridges. 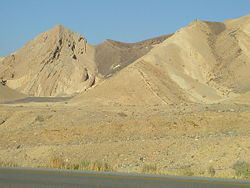 A fault that has a component of dip-slip and a component of strike-slip is termed an "oblique-slip fault." Nearly all faults will have some component of both dip-slip and strike-slip, so defining a fault as oblique requires both dip and strike components to be measurable and significant. Some oblique faults occur within transtensional and transpressional regimes, others occur where the direction of extension or shortening changes during the deformation but the earlier formed faults remain active.

All faults have a measurable thickness, made up of deformed rock that is characteristic of the level in the crust where the faulting happened, the rock types affected by the fault and the presence and nature of any mineralising fluids. Fault rocks are classified by their textures and the implied mechanism of deformation. A fault that passes through different levels of the lithosphere will have many different types of fault rock developed along its surface. Continued dip-slip displacement will tend to juxtapose fault rocks characteristic of different crustal levels, with varying degrees of overprinting. This effect is particularly clear in the case of detachment faults and major thrust faults.

The main types of fault rock are: