Worldwide distribution of mid-oceanic ridges, as mapped by the U.S. Geological Survey.

A mid-ocean ridge (or mid-oceanic ridge) is an underwater mountain range, typically having a valley known as a rift running along its axis, formed by plate tectonics. This type of oceanic ridge is characteristic of what is known as an oceanic spreading center. The uplifted seafloor results from convection currents that rise in the mantle as magma at a linear weakness in the oceanic crust and emerge as lava, creating new crust upon cooling. A mid-ocean ridge demarcates the boundary between two tectonic plates, and is therefore called a divergent plate boundary. 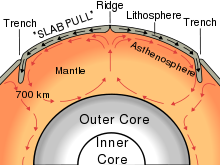 Oceanic crust is formed at an oceanic ridge, while the lithosphere is subducted back into the asthenosphere at trenches.

Because a mid-ocean ridge is submerged at very deep depths in the ocean, its existence was not even known until the 1950s, when it was discovered through surveys of the ocean floor conducted by research ships.

More specifically, the Vema, a ship of the Lamont-Doherty Geological Observatory of Columbia University, traversed the Atlantic Ocean and recorded data about the ocean floor from the ocean surface. A team lead by Marie Tharp and Bruce Heezen analyzed the data and concluded that there was an enormous mountain chain running along the middle of the Atlantic. The mountain range was named the Mid-Atlantic Ridge, and it remains the most famous part of the mid-ocean ridge.

At first, it was thought to be a phenomenon specific to the Atlantic Ocean, because nothing like such a massively long undersea mountain chain had ever been discovered before. However, as surveys of the ocean floor continued to be conducted around the world, it was discovered that every ocean contains parts of the ridge.

It is only in the Atlantic that the ridge system is in the center of the ocean. Nonetheless, the system continues to be known as the "mid-ocean" ridge.

Mid-ocean ridges are geologically active, with new magma constantly emerging onto the ocean floor and into the crust at and near rifts along the ridge axes. The crystallized magma forms new crust of basalt and gabbro.

The rocks making up the crust below the sea floor are youngest at the axis of the ridge and age with increasing distance from that axis. New magma of basalt composition emerges at and near the axis because of decompression melting in the underlying Earth's mantle.

There are two processes, ridge-push and slab-pull, thought to be responsible for the spreading seen at mid-ocean ridges, and there is some uncertainty as to which is dominant. Ridge-push occurs when the weight of the ridge pushes the rest of the tectonic plate away from the ridge, often towards a subduction zone. At the subduction zone, "slab-pull" comes into effect. This is simply the weight of the tectonic plate being subducted (pulled) below the overlying plate dragging the rest of the plate along behind it.

The other process proposed to contribute to the formation of new oceanic crust at mid-ocean ridges is the "mantle conveyor" (see image). However, some studies have shown that the upper mantle (asthenosphere) is too plastic (flexible) to generate enough friction to pull the tectonic plate along. Moreover, unlike in the image above, mantle upwelling that causes magma to form beneath the ocean ridges appears to involve only the mantle above about 400 kilometers' (250 mi) depth, as deduced from seismic tomography and from studies of the seismic discontinuity at about 400 kilometers. The relatively shallow depths from which the upwelling mantle rises below ridges are more consistent with the "slab-pull" process. On the other hand, some of the world's largest tectonic plates such as the North American Plate are in motion, yet are nowhere being subducted.

The rate at which the mid-ocean ridge creates new material is known as the spreading rate, and is generally measured in millimeters per year (mm/yr). The common subdivisions of spreading rate are fast, medium, and slow, with corresponding values that are generally >100 mm/yr, between 100 and 55 mm/yr, and 55 to 20 mm/yr, respectively, for full rates.

The spreading rate of the north Atlantic Ocean is about 25 mm/yr, while in the Pacific region, it is 80–120 mm/yr. Ridges that spread at rates below 20 mm/yr are referred to as ultraslow spreading ridges (such as the Gakkel ridge in the Arctic Ocean and the Southwest Indian Ridge) and they provide a much different perspective on crustal formation than their faster spreading brethren. 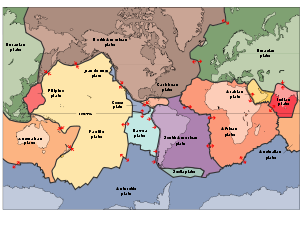 Plates in the crust of the earth, according to the plate tectonics theory.

Alfred Wegener proposed the theory of continental drift in 1912. However, the theory was dismissed by geologists because there was no mechanism to explain how continents could plow through ocean crust. As a consequence, the theory became largely forgotten.

Following the discovery of the mid-ocean ridge in the 1950s, geologists faced a new task: Explaining how such an enormous geological structure could have formed. In the 1960s, geologists discovered and began to propose mechanisms for sea floor spreading. Plate tectonics was a suitable explanation for sea floor spreading, and the acceptance of plate tectonics by the majority of geologists resulted in a major paradigm shift in geological thinking.

It has been estimated that 20 volcanic eruptions occur each year along Earth's mid-ocean ridges, and that every year 2.5 square kilometers of new seafloor is formed by this process. With a crustal thickness of 1 to 2 kilometers, this amounts to about 4 cubic kilometers of new ocean crust formed every year.

Retrieved from https://www.newworldencyclopedia.org/p/index.php?title=Mid-ocean_ridge&oldid=1086515
Categories:
Hidden category:
This page was last edited on 9 November 2022, at 17:32.
Content is available under Creative Commons Attribution/Share-Alike License; additional terms may apply. See Terms of Use for details.