A midden, also known as a kitchen midden or a shell heap, are terms used by archaeologists for a dump for domestic waste. One of the universal signs of human settlements, middens vary from convenient, single-use pits created by nomadic groups or, as in more modern times, long-term, designated dumps used by sedentary communities that accumulate over several generations.

Middens have been discovered dating back to prehistoric times in locations all around the world. Their contents include food remains, tools, and pottery, all of which provide valuable, sometimes the only, information available regarding past human societies. The study of middens thus greatly enriches our understanding of humankind in history, and also raise awareness of how contemporary societies may be viewed in the future when the landfills of today remain as part of our legacy.

Did you know?
The origin of the word "midden" is Scandinavian and means "manure pile"

The word Midden is of Scandinavian origin, from the word mykdyngja, which literally translates as "manure pile."[1] The term was transmitted to the English language via a Middle English derivation, "midding" and consequently has become "Midden" in more contemporary times.[1]

It should be noted that the term midden is more of a technical term used by archaeologists and scholars, as is Shell mound which refers to coastal middens composed largely of mollusk shells. Landfill, garbage dump, and junk yard are the more colloquially used terms for contemporary middens.

One of the most universal characteristics of human groups is that they produce waste. While one or a few person's waste may go unnoticed as it is easily scattered about, a group of people produce exponentially more refuse. In ancient times, as human beings started to band together into larger and larger groups, more waste began to be produced. Since early people were hunter-gatherers and traveled in nomadic groups, temporary middens were developed. Later, when settlements became permanent and centralized, and when humankind became more agrarian, somewhere to dispose of waste became one of the early societal problems. The permanent midden, often a hole dug in the ground, or a designated area to pile waste, was the solution.[2]

Historical middens are valuable discoveries for archaeologists. Sometimes a midden is the first indication of the presence of an ancient settlement previously undiscovered; occasionally it is the only evidence of the presence of an ancient society. An old and large midden may have many layers, which allows archaeologists using stratigraphy to create timelines and so date the midden and potentially the larger archaeological site.[2] Midden deposits can contain a variety of archaeological material, including animal bone, feces, shell, botanical material, vermin, sherds (fragments of pottery), lithics (stone works and the chips or flakes of stone produced from carving, known as debitage), and other artifacts and ecofacts (natural objects not touched by humans, such as seeds, but carrying archaeological significance) associated with past human occupation. These features, therefore, provide a useful resource for archeologists who wish to study the diet and habits of past societies. Middens with damp, anaerobic conditions can even preserve organic remains which can be analyzed to obtain information regarding climate and seasonal use.[2]

A shell midden or shell mound is a midden comprised mainly of mollusk shells. Shell middens are found in coastal zones all over the world. Like all middens, shell middens also contain the debris of human activity and remains of their meals. Shells have a high calcium carbonate content which tends to make the middens alkaline. This slows the normal rate of decay caused by soil acidity, leaving a relatively high proportion of organic evidence (food remnants, organic tools) available for archeologists to study.[3]

Some shell middens are processing remains: areas where aquatic resources were processed directly after harvest and prior to use or storage in a distant location. Some shell middens are directly associated with villages, as a designated village dump site. In others the material is directly associated with houses in the village; each house would dump their garbage directly outside the house. In all cases, shell middens are extremely complex and very difficult to excavate fully and exactly. However, the fact that they contain a detailed record of what food was eaten or processed and many fragments of stone tools and household goods makes them invaluable objects of archeological study. 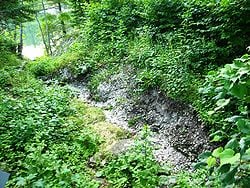 The Whaleback Shell Midden in Maine was used for oyster harvesting from 200 B.C.E. to 1000 C.E. 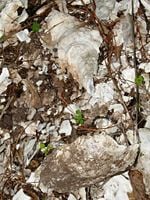 Up-close of the shells at Whaleback

The East Chisenbury midden is a famous example of a large dump, dating to the first millennium B.C.E. Situated on Salisbury Plain in the United Kingdom, the midden mound contains numerous discrete layers of flint, charcoal, bones, pottery and excrement. It survives to a height of 2.5 meters (8.2 ft) and measures 140 meters (460 ft) in width despite 2500 years of weathering.[4] The accumulation is believed by some archeologists to have a ritual basis, with organized deposition of waste suggested as an explanation for its size and longevity.[4] 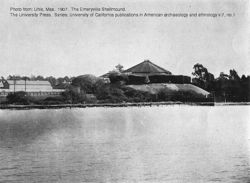 The Shellmound and dance pavilion, in 1902

The Emeryville Shellmound, in Emeryville, California, is a once-massive archaeological shell midden deposit (dark, highly organic soil containing a high concentration of human food waste remains, including shellfish). It was one of a complex of five or six mounds along the mouth of the perennial Temescal Creek, on the east shore of San Francisco Bay between Oakland and Berkeley. From a time long before the arrival of the Europeans in 1769, groups of Native Americans lived at this spot by the Bay. Originally reported as over 60 feet (18 m) high and some 350 feet (110 m) in diameter, the mound constituted a small hill, and was physically linked to several adjacent mounds by extensive lower-lying midden deposits. A large amusement park operated on the site from the 1870s through 1924. The park contained a racetrack, two dance halls, bars, a carousel, bowling alley, and a world class shooting range where national competitions were regularly held. One of the dance pavilions was actually located atop the shellmound, providing a fantastic view of the bay for partygoers.

Green Mound is one of the largest Pre-Columbian shell mounds in the United States. Located in Ponce Inlet, Florida, the peak of the mound is the highest elevation in the small city. The mound is thought to have been built by Native Americans in the late St. John’s period, or after 800 C.E.[5] The St. John’s period was characterized by the introduction of mound-building and a more sedentary, rather than nomadic lifestyle. The mound was built from a combination of discarded oyster shell, clam shell, and other debris. Later excavation revealed multiple layers of clay floors, remnants of structural components such as postholes, and evidence of ash, fire pits, and hearths at the site.[6] These indicate that the mound was in fact inhabited by its builders and their subsequent generations.[7] 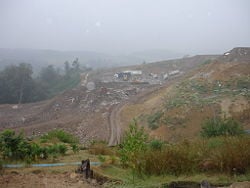 The increase in human population has directly led to an exponential increase in the amount of waste produced all over the world. As a result, designated areas for waste, often called landfills, have become established. Usually such places are operated and maintained by governments once all waste has been collected from individual households and businesses, with clear standards to ensure that they do not pose hazards to the health and well-being of both human beings and the natural environment:

Modern landfills are well-engineered facilities that are located, designed, operated, and monitored to ensure compliance with federal regulations. Solid waste landfills must be designed to protect the environment from contaminants which may be present in the solid waste stream.[8]

During landfill operations the waste collection vehicles are weighed at a weigh-bridge on arrival and their load is inspected for wastes that do not accord with the landfill’s waste acceptance criteria. Through the weighing process, the daily incoming waste tonnage can be calculated and listed in databases. After loads are deposited, compactors or dozers are used to spread and compact the waste on the working face. Waste compaction is critical to extending the landfill life. Factors such as waste compressibility, waste layer thickness, and the number of passes of the compactor over the waste affect the waste densities.[9] In addition to trucks, some landfills may be equipped to handle railroad containers. The use of "rail-haul" permits landfills to be located at more remote sites, without the problems associated with many truck trips.[9]

Typically, in the working face, the compacted waste is covered with soil on a daily basis. Alternative waste cover materials include sprayed on foam products and temporary blankets which can be lifted into place and then removed the following day prior to waste placement. Chipped wood and chemically "fixed" bio-solids, may also be used as an alternate daily cover.