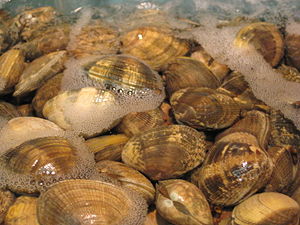 Clam is an imprecisely defined common name variously used for certain bivalve mollusks or for all bivalve mollusks. As a member of the class Bivalvia (syn. Pelecypoda), clams typically are characterized by two-part calcareous shells that are hinged and more or less symmetrical and a laterally compressed muscular foot, which when extended into sediment (sand or mud), can swell with blood and form a hatchet-shaped anchor (Towle 1989). The term clam often is applied generally to those bivalves with the two shells of nearly equal size and that live in the sand or mud.

The term clam can be more precisely equated to any bivalve other than an oyster, mussel, or scallop and that has a more-and-less oval shape. In the United States, however, the word clam often means any bivalve mollusk. In this later sense, the term includes oysters, mussels, and scallops. Bunje (2001) places the clams within the subclass Heterodonta, but members of the order Unionoida in subclass Palaeoheterodonta often are known as freshwater clams (or as freshwater mussels).

The term clam frequently is applied to edible bivalves. Not all edible bivalves with the common name clam are round or oval in shape: the razor clam has an elongated shell whose shape suggests a straight razor.

Clams provide important commercial, culinary, and ecological values. They are a major source of food worldwide and the focus of important fishery and aquaculture industries. Ecologically, they play a key role in food chains, generally filtering plankton from the water and being preyed upon by various fishes, mollusks, mammals, and so forth. In addition, they are important for maintaining water quality through their remarkable ability to filter large quantities of water every day, about fifty liters of water per clam per day. They also are popular motifs in art work. 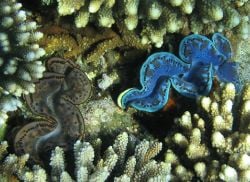 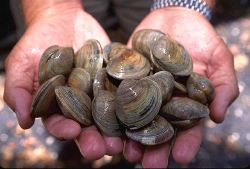 Littleneck clams; the pictured mollusks are of the species Mercenaria mercenaria.

Clams are not a taxonomic group (unless one considers the term synonymous with bivalve).

Clams (as with all bivalves) are exclusively aquatic, requiring water for reproduction and respiration, and typically for feeding (Grzimek et al. 2004). Both marine and freshwater species are found. Shell morphology typically reflects the nature of the habitat, with calm-water species often having more delicate and leaflike shells compared to those subject to fast-flowing currents (Grzimek et al. 2004).

A clam's shell consists of two valves, which are connected by a hinge joint and a ligament that can be external or internal. Two adductor muscles close the shells. The clam has no head, and usually has no eyes, (scallops are a notable exception), but a clam does have kidneys, a heart, a mouth, and an anus. Clams have bilateral symmetry.

Clams, like most mollusks, also have open circulatory systems, which means that their organs are surrounded by watery blood that contains nutrients and oxygen.

Bivalves tend to be filter-feeders. They lack a radula and feed by siphoning and filtering large organic matter from water, using their gills. Clams eat plankton by filter feeding, and they themselves are eaten by small sharks and squid. In the life cycle of the bivalve, the free-swimming veliger larva (characteristic of mollusks) feed on plankton before settling down.

Most hard clams live just four to eight years, but the clam species Arctica Atlantica has been known to live 200 to 300 years (Mahr 2007). In October 2007, an Arctica islandica clam caught off the coast of Iceland was originally calculate to be at least 405 years old, and was declared the world's oldest living animal. In 2013, scientists recalculated the age of this clam and measured its age as 507 years old.

The giant clam (Tridacna gigas) is the largest living bivalve mollusk. One of a number of large clam species native to the shallow coral reefs of the South Pacific and Indian oceans, they can weigh more than 227 kilograms (500 pounds), measure as much as 1.2 meters (four feet) across, and have an average lifespan in the wild of 100 years or more (NG 2008). Sessile in adulthood, the creature's mantle tissues act as a habitat for the symbiotic single-celled dinoflagellate algae (zooxanthellae) from which it gets its nutrition. By day, the clam spreads out its mantle tissue so that the algae receive the sunlight they need to photosynthesize.

The term clam often is used in terms of edible bivalves. In culinary use, the term "clam" most often refers to the hard-shell clam Mercenaria mercenaria but it may refer to several other species, such as the soft-shell clam, Mya arenaria. The Manila clam, Tapes philippinarum, is important as a food source worldwide, including in Canada as an introduced species important for fishery and aquaculture industries. China is the largest producer of clams.

In North America, the two main varieties of clams with respect to culinary use are designated "hard-shell clams" and "soft-shell clams" (Herbst 2001). Hard-shell clams found on the East Coast, also known as quahog, come in three sizes: littleneck clams (shell diameter less than two inches), cherrystone clam (about two-and-a-half inches), and chowder clam (a shell diameters of at least three inches) (Herbst 2001). Hard-shell clam varieties on the West coast include the pacific littleneck clam and the Pismo clam (Tivela stultorum). Soft-shelled clams, also called soft clams, have shells, but they are thin and brittle and they do not completely close their shell because of the extending siphon (Herbst 2001). The razor clam and the geoduck clam are examples of soft-shelled clams (Herbst 2001). When buying fresh in their shells, it is recommended to make sure the hard-shell clams have their shell tightly closes (or snap it shut when tapped lightly) and that the soft-shell clam moves when its rubbery neck (siphon) is lightly touched (Herbst 2001). Clams also are sold shucked and frozen.

Clams can be eaten raw, steamed, boiled, baked, or fried; the method of preparation depends partly on size and species. Clam chowder is a popular soup in the U.S. and Canada. In Italy, clams are often an ingredient of mixed seafood dishes, or are eaten together with pasta.

Clams tend to be an exceptionally rich source of vitamin B12 and a good source of protein and niacin (Bender and Bender 2005).

Beyond culinary use, some clams are popular for aquariums, including the Maxima clam Tridacna maxima, a species of giant clam that is popular with saltwater aquarium hobbyists.