Scallop is the common name for any of the marine bivalve mollusks comprising the family Pectinidae, characterized by a large, well-developed central adductor muscle, the absence of a muscular foot, and by the two valves typically being fan-shaped, often with a radiating fluted pattern, and with flared winglike projections on both sides of the straight hinge. The term scallop also is used for the edible adductor muscle, which is the part of these invertebrates that is most commonly eaten. Scallop also is used to refer to the distinctive shell of this mollusk. Their shell shape tends to be highly regular, recalling one archetypal form of a seashell, and because of this pleasing geometric shape, the scallop shell is a common decorative motif.

Scallops constitute a cosmopolitan family, found in all of the world's oceans. Most scallops are free-living and can swim by rapidly opening and closing their shells. Because they are active swimmers, scallops are in fact the only migratory bivalve.

Scallops are important in food chains, consuming microscopic organisms, such as algae and zooplankton, and being consumed by many animals, such as crabs, sea stars, and rays. The intricate harmony of the ecosystem is exhibited in the fact that overfishing of sharks has led to a decline in scallops in some areas—a result of an explosion in numbers of the scallop-eating cownose rays, which normally are consumed by the sharks. For humans, many scallops are highly prized as a food source. Some scallops also are valued for their brightly colored shells.

Scallops are members of the mollusk class Bivalvia (or Pelecypoda), an aquatic group that also includes clams, oysters, and mussels. As with most bivalves, hence the name Bivalvia ("two valves"), scallops have two-part calcareous shells, or valves, that are hinged and more or less symmetrical. Whereas a mollusk typically has a body divided into the three parts of head, visceral mass, and muscular foot, bivalves lack a distinct head and head structures are much reduced. Unlike most bivalves, but like adult oysters and giant clams, scallops lack a foot. 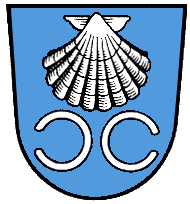 Scallops are similar to true oysters (family Ostreidae) in that they have a central adductor muscle. As a result, the insides of their shells have a characteristic central scar, marking the point of attachment for this muscle. The adductor muscle of scallops is larger and more developed than that of oysters.

Most scallops are free-living, but some species can attach to a substrate by a structure called a byssus, or even be cemented to their substrate as adults (for example, Hinnites spp.). A free-living scallop can swim by rapidly opening and closing its shell. This method of locomotion is also a defense technique, protecting it from threatening predators. Some scallops can make an audible soft popping sound as they clap their shells underwater, leading one seafood vendor to dub them "singing scallops." The name scallop originated in the ancient Canaanite sea port Ascalon (modern city of Ashkelon, Israel).

Scallops feed by filtering microscopic animals and plants from the water via cilia.

The scallop family is unusual in that some members of the family are dioecious (males and females are separate), while others are simultaneous hermaphrodites (both sexes in the same individual), and a few are protoandrous hermaphrodites (males when young then switching to female). Spermatozoa and ova are released freely into the water during mating season and fertilized ova sink to the bottom. After several weeks, the immature scallop hatches and the larvae drift in the plankton until settling to the bottom again to grow, usually attaching by means of byssal threads. Some scallops, such as the Atlantic bay scallop Argopecten irradians are short lived, while others can live 20 years or more.

Age can often be inferred by annuli, the concentric rings of their shells.

Scallops are most commonly harvested using scallop dredges or bottom trawls. Nowadays there is a market for scallops harvested by divers. Scallops are hand-caught on the ocean floor, as opposed to being dragged across the sea floor by a dredge, which causes them to collect sand. As a result, diver scallops tend to be less gritty and are popular among the food cognizant. They can also be more ecologically friendly, as the harvesting method does not cause damage to undersea flora or fauna. In addition, the normal harvesting methods can cause delays of up to two weeks before they arrive at market, which can cause the flesh to break down and result in a much shorter shelf life.

By far, the largest wild scallop fishery is for the Atlantic sea scallop (Placopecten magellanicus) off northeastern United States and eastern Canada. Most of the rest of the world's production of scallops are from Japan (wild, enhanced, and aquaculture), and China (mostly cultured Atlantic bay scallops).

Scallop and pecten output in 2005

China is the major producer of scallops, with almost all of its production (over 99 percent) from aquaculture. In 1997, over one million metric tons of scallops were produced from aquaculture in China, with an estimated value of over US$1 billion (Shumway and Parsons 2006). Within Europe, Russia is the industry leader.

On the east coast of the United States, over the last 100 years, the populations of bay scallops have greatly diminished. This decrease is due to several factors, but probably is mostly due to reduction in sea grasses (to which bay scallop spat attach) due to increased coastal development and concomitant nutrient runoff. Another possible factor is reduction of sharks from overfishing. A variety of sharks used to feed on rays, which are a main predator of bay scallops. With the shark population reduced, in some places almost eliminated, the rays have been free to dine on scallops to the point of greatly decreasing their numbers (Milius 2007; Schmid 2007).

By contrast, the Atlantic sea scallop (Placopecten magellanicus) is at historically high levels of abundance after recovery from overfishing.

Scallops are a popular type of shellfish in both Eastern and Western cooking. They are characterized by having two types of meat in one shell: The adductor muscle, called "scallop" which is white and meaty, and the roe (egg masses), called "coral," which is red or white and soft.

Scallops are a rich source of protein, niacin, and vitamin B12, as well as a source of iron (Bender and Bender 2005). They commonly are classified for eating as bay scallops, which are tiny and with a very small muscle, and the larger sea scallops, with a larger muscle (Herbst 2001). The less widely available bay scallops tend to have sweeter and more succulent meat and also be more expensive (Herbst 2001). Scallops are used in a variety of preparations, including sautéing, grilling, broiling, and poaching, and are also used in soups, stews, and salads (Herbst 2001).

In Western cuisine, scallops are commonly sautéed in butter, or else breaded and deep fried. Scallops are commonly paired with light semi-dry white wines. In the United States, when a scallop is prepared, usually only the adductor muscle is used; the other parts of the scallop surrounding the muscle are ordinarily discarded. Sometimes markets sell scallops already prepared in the shell with only the adductor muscle intact. Outside the U.S. the scallop is often sold whole.

In a sushi bar, hotategai (帆立貝, 海扇) is the traditional scallop on rice, and while kaibashira (貝柱) may be called scallops, it is actually the adductor muscle of any kind of shellfish, including mussels, oysters, and clams.

Scallops have lent their name to the culinary term scalloped, which originally referred to seafood creamed and served hot in the shell (Rombauer and Rombauer Becker 1981). Today, it means a creamed casserole dish such as scalloped potatoes, which contains no seafood at all.

The scallop shell is the traditional emblem of Saint James the Greater and is popular with pilgrims on the Way of St James to the apostle's shrine at Santiago de Compostela in Spain. Medieval Christians making the pilgrimage to his shrine often wore a scallop shell symbol on their hat or clothes. The pilgrim also carried a scallop shell with him and would present himself at churches, castles, abbeys, and so forth, where he could expect to be given as much sustenance as he could pick up with one scoop. Probably he would be given oats, barley, and perhaps beer or wine. Thus, even the poorest household could give charity without being overburdened.

The association of Saint James with the scallop can most likely be traced to the legend that the apostle once rescued a knight covered in scallops. An alternate version of the legend holds that while St. James's remains were being transported to Spain from Jerusalem, the horse of a knight fell into the water, and emerged covered in the shells. 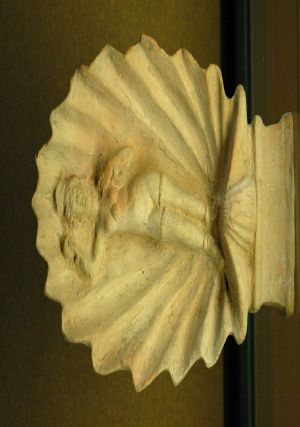 Aphrodite in a sea shell, from Amisos, now in the Louvre

One legend of the Way of St. James holds that the route was seen as a sort of fertility pilgrimage, undertaken when a young couple desired to bear offspring.

Alternatively, the scallop resembles the setting sun, which was the focus of the pre-Christian Celtic rituals of the area. To wit, the pre-Christian roots of the Way of St. James was a Celtic death journey westwards towards the setting sun, terminating at the End of the World (Finisterra) on the "Coast of Death" (Costa de Morta) and the "Sea of Darkness" (i.e., the Abyss of Death, the Mare Tenebrosum, Latin for the Atlantic Ocean, itself named after the Dying Civilization of Atlantis). The reference to St. James rescuing a "knight covered in scallops" is therefore a reference to St. James healing, or resurrecting, a dying (setting sun) knight. Similarly, the notion of the "Sea of Darkness" (Atlantic Ocean) disgorging St. James' body, so that his relics are (allegedly) buried at Santiago de Compostella on the coast, is itself a metaphor for "rising up out of Death," that is, resurrection.

Many paintings of Venus, the Roman goddess of love and fertility, included a scallop shell in the painting to identify her. This is evident in Botticelli's classically inspired The Birth of Venus (which has even been nicknamed "Venus on the half-shell")

The scallop shell symbol found its way into heraldry as a badge of those who had been on the pilgrimage to Compostela, although later it became a symbol of pilgrimage in general. Winston Churchill's family coat of arms includes a scallop, another example is the surname Wilmot and also John Wesley's (which as a result the scallop shell is used as an emblem of Methodism). However, charges in heraldry do not always have an unvarying symbolic meaning, and there are cases of arms in which no family member went on a pilgrimage and the occurrence of the scallop is simply a pun on the name of the armiger, or for other reasons.

There are more than 30 genera and around 350 species in the Family Pectinidae. While species are generally well circumscribed, their attribution to subfamilies and genera is sometimes equivocal, and there is minimal information about phylogeny and relationships of the species, not least because most work has been based on adult morphology (Barucca et al. 2004). 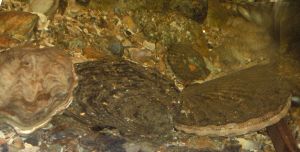 The great scallop, Pecten maximus, on the right, next to the native European oyster, Ostrea edulis. 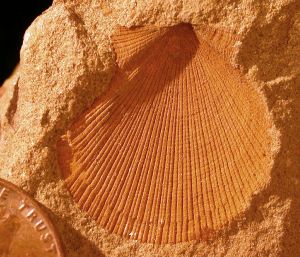 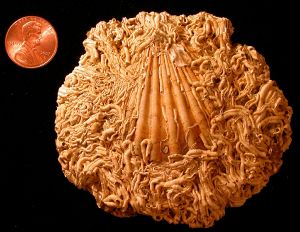