The Birth of Venus, (detail) by Sandro Botticelli, 1485

Venus was a major Roman goddess principally associated with love, beauty and fertily, as well as ploughlands and gardens. She was considered the ancestor of the Roman people by way of its mythological progenitor, Aeneas, and therefore played a pivotal role in many Roman religious festivals and myths. Since many of the figures of Roman mythology were largely appropriated from the Greek tradition, Venus is very similar to Aphrodite, the goddess of love in the Greek pantheon.

Venus carries on a tradition of eroticized female divinities featured in the legends of surrounding Indo-European and Near Eastern mythological systems, such as Inanna of the Sumerians, Ishtar of the Mesopotamians, Hathor in Ancient Egypt, Astarte of the Syro-Palestinians, Turan among the Etruscans, and the Ushas, Vedic goddesses of the dawn. Like the Greek goddess Aphrodite, Venus is described as a beautiful female with jurisdiction over love, sexuality, fertility, and sometimes even sacred prostitution. It is likely that Venus, borrowed significant aspects from the attributes of surrounding goddesses and even distant Indo-European celestial cousins. For example, she bears a particular linguistic link to the Ushas, a Sanskrit epithet of vanas- referring to "loveliness," "longing" or "desire." Vanas- is cognate to Venus, suggesting that Venus was connected to the Proto-Indo-European linguistic tradition via the reconstructed stem wen- "to desire".[1]

The story of Venus' birth, borrowed directly from the Greeks, explains that she arose from the foam of the sea shore. This miraculous creation resulted after Saturn castrated his tyrant father, the supreme sky god Caelus (equivalent to the Greek Uranus). After Saturn had sliced off Caelus' genitals, he promptly threw them into the sea. As the genitals drifted over the water, the blood and (or, in some versions, the semen) that issued forth from the severed flesh mixed with the sea water to foment the growth of the child who would become Venus.

Venus was the wife of Vulcan, an unsightly metal worker god of banal character, with whom she was perpetually unsatisfied. Venus and Vulcan had no children together, but her prolific extramarital activities with both gods and mortal men allowed her to mother many offspring nonetheless. Vulcan was often disgusted by his wife's innumerable amorous trysts, and eventually would exact vengeance on Venus and Mars, the god of war and also her preferred lover. In order to do this, Vulcan fashioned a net with unbreakable links and placed it in the bedroom in which the lovers met. The next time Mars and Venus were amorous, the net fell, ensnaring them. Vulcan proceeded to bring all of the gods together to look upon the scandalous couple and mock them. Once the chains were lifted, Mars promptly fled for safety.

Among Venus' many other children of significance was Aeneas, the legendary Trojan hero whose wanderings enabled him to found the city that would one day become Rome. Aeneas was born by way of Venus' tryst with the mortal Anchises, whom she seduced in the guise of a Phrygian princess, a myth borrowed directly from the Greeks. Legend holds that it was Venus who aided Aeneas in escaping from the burning city of Troy, protecting him from Juno's wrath. Later on, she had Dido, the queen of Carthage, fall in love with Aeneas and grant him refuge in the process. After Aeneas' death, Venus asked Jupiter to render Aeneas immortal. Jupiter agreed, and after the river god Numicius had cleansed Aeneas of all his mortal parts, Venus anointed him with Ambrosia and Nectar, elevating him to godly status. Since Aeneas is a distant descendant of Romulus and Remus, the mythological founders of Rome, Venus was also considered a divine ancestor of the entire race of Roman people. In addition, the Julian family of Rome, most famous for the emperors Julius Caesar and Augustus, also traced its lineage to Aeneas and therefore to Venus as well. 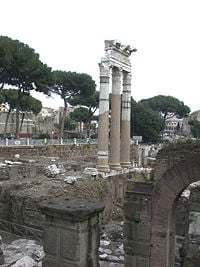 Worship of Venus was centered around her major temples, primarily during two Vinalia festivals that celebrated the bountiful harvest. On August 15, 293 B.C.E., her oldest-known temple was dedicated during the Third Samnite War by Quintus Fabius Maximus Gurges. This temple was built with money collected from fines levied to women who had been found guilty of adultery and was probably situated at the foot of the Aventine Hill near the Circus Maximus. Its dedication day, August 19, was celebrated thereafter during the Vinalia Rustica festival.

On April 23, 215 B.C.E., another temple was dedicated to Venus, this one located outside the Colline gate on the Capitoline Hill for purposes of commemorating the Roman defeat at the Battle of Lake Trasimene. This dedication day was celebrated in the centuries that followed by another Vinalia festival called Vinalia Urbana, which again was originally dedicated to Jupiter. Early on, this festival was marked by the offering of a libation to Jupiter as a token of gratefulness for the previous year's wine harvest. Later on, once it had come to be related to Venus, this wine was offered at her temple on the Capitol.

A number of minor temples and festivals were dedicated to Venus in her various roles, as well. In her role as the ancestress of the Roman people, Venus, the mother, was celebrated at a festival on September 26. As Venus was regarded as the mother of the Julian bloodline in particular, Julius Caesar also dedicated a temple to her in Rome. On April 1, the Veneralia was celebrated in honor of Venus Verticordia ("Venus the Changer of Hearts"), an aspect of the goddess widely recognized as the protector against vice. An additional temple to Venus Verticordia was dedicated in Rome in 114 B.C.E. at the instruction of the Sibylline Books to atone for the scurrilous behaviour of three Vestal Virgins. Venus Victrix ("Venus the Victorious") was an aspect of Venus to which Pompey dedicated a temple at the top of his theater in the Campus Martius in 55 B.C.E. There was also a shrine to Venus Victrix on the Capitoline Hill, and festivals were dedicated specifically to her on August 12 and October 9. 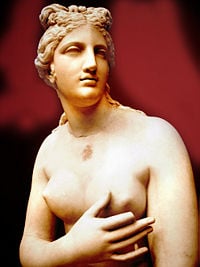 Like other major Roman deities, Venus' numerous functions in Roman cult and myth can be identified by numerous epithets she was given that refer to different aspects or roles of the goddess. Venus Obsequens ("Graceful Venus" or "Indulgent Venus"), for instance, was an epithet to which her first temple was dedicated and no doubt referred to her role as a goddess of sexual excess. Similarly, the epithet Venus Erycina ("Venus from Eryx"; also known as Venus Erucina), embodied "impure" love, and was the patron goddess of prostitutes. This variation of the goddess originated on Mount Eryx in western Sicily. Temples were dedicated to her on the Capitoline Hill and outside the Porta Collina. Venus Libertina (or "Venus the Freedwoman") referred to her role as a woman outside of marriage; a temple was dedicated to Venus Libitina on the Esquiline Hill. Venus Felix ("Lucky Venus"), was an epithet used for another variation of Venus worshipped at a temple on the Esquiline Hill and for a temple constructed by Hadrian dedicated to "Venus Felix et Roma Aeterna" ("Favorable Venus and Eternal Rome") on the north side of the Via Sacra. This epithet is also used for a specific sculpture at the Vatican Museums. In her role as mother, Venus was known as Venus Genetrix ("Mother Venus"). This name has also been attached to an iconological type of statue of Aphrodite/Venus. Additional epithets for Venus included Venus Amica ("Venus the Friend"), Venus Armata ("Armed Venus"), Venus Caelestis ("Celestial Venus"), and Venus Aurea ("Golden Venus").

Syncretistic epithets attributed to Venus were Venus Cloacina (or "Venus the Purifier"), a fusion of Venus with the Etruscan water goddess Cloacina, likely resulting from the statue of Venus erected near the Cloaca Maxima, Rome's sewer system. This statue was erected on the spot where peace was concluded between the Romans and Sabines. Venus Murcia ("Venus of the Myrtle") was an epithet that merged the goddess with the little-known deity Murcia or Murtia who was associated with the myrtle-tree.

Considering the idea that Venus was the personification of beauty and sexuality, it is not surprising that Venus has been a common subject of classical, medieval and modern art alike. Roman and Hellenistic art produced many variations on the goddess, often based on Aphrodite of Cnidus, Praxiteles' most famous sculpture. Many female nudes from this period of sculpture, whose original subjects are unknown, are in modern art history conventionally called "Venuses," even if they originally may have served to portray a mortal woman rather than as a cult statue of the goddess. Examples of this type of work include the famous Venus de Milo (130 B.C.E.), Venus de' Medici, Capitoline Venus and the Venus Kallipygos, a form of the goddess popular in Syracuse. 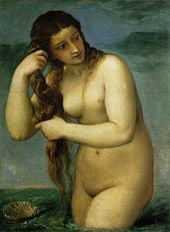 Venus renewed her popularity as a subject of painting and sculpture during the Renaissance period in Europe. As a "classical" figure for whom nudity was her natural state, it was socially acceptable to depict her unclothed. As the goddess of sexual healing, a degree of erotic beauty in her presentation was also justified, which had an obvious appeal to many artists and their patrons. Examples of such works include Botticelli's "The Birth of Venus" (c. 1485), Giorgione's "Sleeping Venus" (c. 1501) and “Venus of Urbino” (1538), among many others. Over time, the general term venus came to refer to any post-classical artistic depiction of a nude woman, even when there was no indication that the subject was the goddess.

Similarly, in the field of prehistoric art, small Neolithic sculptures of rounded female forms have been conventionally referred to as "Venus figurines" ever since archaeologist Josef Szombathy discovered a statuette of a female figure in Lower Austria during the early 1900s. The statue was thereafter known as the "Venus of Willendorf," although the name of the actual deity is unknown.

Despite the fact that Venus is no longer widely worshipped, she has had a lasting impact upon the Western world. For instance, the name of the goddess was adopted as the name of Venus, the second planet from the sun. More importantly, as a goddess of love and lust, Venus persists in Western consciousness as another important link in the historical chain of erotic female figures within ancient mythology, including the Norse goddesses Frigg and Freyja, the Mesopotamian Ishtar, the Syro-Palestinian Astarte, and Venus' Greek counterpart Aphrodite. As a personification of beauty, Venus has inspired a number of famous images throughout history, as well as a surfeit of contemporary ones, and as such, she has become one of the most identifiable images of the goddess in the western world.