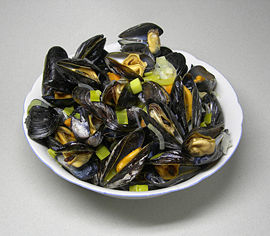 Shellfish is a a broad term for various aquatic mollusks, crustaceans, and echinoderms that are used as food. A culinary and fisheries term, rather than taxonomic, the term shellfish is imprecisely defined, with some including only those aquatic invertebrates that have a shell or a shell-like exoskeleton—such as bivalves (clams, oysters), gastropods (snail, abalone), crabs, lobsters, shrimp, and sea urchins—and others including also the shell-less cephalopods (squid, octopus). In addition, although the word is primarily used as a term for marine invertebrate species, freshwater edible invertebrates, such as crayfish and river mussels, are also sometimes grouped with the marine species under the umbrella concept of "shellfish."

Shellfish provide important culinary, economic, and ecological values. As a food item, they have been important for thousands of years in the cuisines of many nations, and an important commercial industry have grown up around them. Shellfish aquaculture is a rapidly growing enterprise that helps provide a stable source of shellfish while not harming wild populations. Ecologically, not only are shellfish vital in marine food chains, but some filter-feeding forms are able to purify a great amount of water and thus are crucial to the stability of marine systems. And it was shellfish that were the "canaries of the sea" and alerted people to the danger of the disposal of human sewage and other pollution as outbreaks of hepatitis and typhoid fever were traced to consumption of shellfish from contaminated waters (Karney 2008). 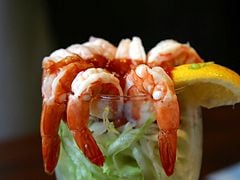 Shellfish are aquatic invertebrates that are used for food and typically either have a hard exterior or an exoskeleton, or belong to a group of invertebrates that typically are characterized by such shells. Since almost all shellfish have a hard exterior or exoskeleton, the first part of the word is "shell." The second word fragment "fish," is here used in the archaic sense, to mean an animal that lives its whole life in water. However, these invertebrate animals are not "fish" in the modern sense of the word, and therefore the term finfish or fin fish is sometimes used to distinguish ordinary (vertebrate) fish from shellfish.

The word "shellfish" is used as singular and plural, but the less common plural "shellfishes" is sometimes used when referring to various "types of shellfish" (Festing 1999).

The two most common groups of invertebrates associated with the term shellfish are mollusks and crustaceans. Mollusks commonly used as food include many species of clams, mussels, oysters, winkles, and scallops. Some decapod crustaceans commonly eaten are various species of shrimp, prawn, lobster, crayfish, and crabs.

Echinoderms are not as frequently eaten as mollusks and crustaceans, but the roe of sea urchins is quite popular in many parts of the world, and in Asia, sea cucumbers (echinoderms that have no shell) are gathered as a food item. These are often also considered as shellfish.

Other edible mollusks such as shell-less cephalopods (squid, octopus, and cuttlefish, the later having an internalized shell) and terrestrial snails lacking a shell, such as escargot, are sometimes considered to be "shellfish" and sometimes not.

On occasion, the word shellfish is used to refer only to edible marine molluscs, and then shrimp, crab, or lobster are not included in the category (MDOT 2008).

Shellfish are among the most common food allergens (FAAN 2007).

Use in various cuisines 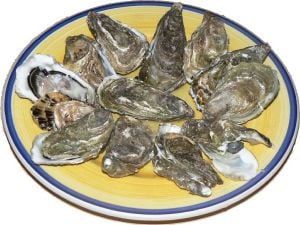 Raw oysters presented on a plate.

Archaeological finds have shown that humans have been making use of shellfish as a food item for thousands of years. In the present, shellfish dishes are a feature of almost all the cuisines of the world, providing an important source of protein for many diets around the world, especially in the countries with coastal areas. 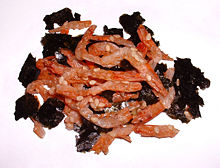 In the Japanese cuisine, chefs often use shellfish and their roe in different dishes. Sushi (vinegared rice, topped with other ingredients, including shellfish, fish, meat, and vegetables), feature both raw and cooked shellfish. Sashimi primarily consists of very fresh raw seafood, sliced into thin pieces and served with only a dipping sauce (soy sauce with wasabi paste—a type of Japanese horseradish or hot mustard, a spice with extremely strong hot flavor—and thinly-sliced ginger root), and a simple garnish such as shiso (a kitchen herb, member of the mint family) and shredded daikon radish. 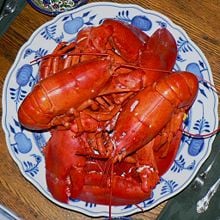 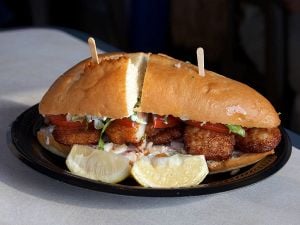 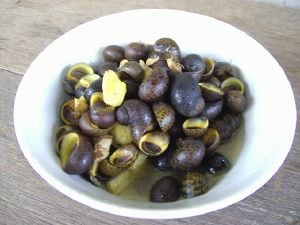 A dish of cooked freshwater nerites from the Rajang River, Sarawak, Malaysia

Lobster, in particular, is a great delicacy in the United States, where families in the Northeast region make them into the centerpiece of a clam bake, usually for special occasions. Lobsters are eaten on much of the East Coast; the American lobster ranges from Newfoundland down to about the Carolinas, but is particularly associated with Maine. A typical meal involves boiling the lobster with some slight seasoning and then serving with drawn butter, baked potato, and corn on the cob.

Clamming is done both commercially and recreationally along the Northeast coastline of the United States. Various type of clams are incorporated into the cuisine of New England. Notable is the soft-shelled clam, which is eaten fried or steamed, where they are called "steamers." Many types of clams can be used for clam chowder, but quahogs, a hard shelled clam also known as a chowder clam, are often used because the long cooking time softens its tougher meat.

The Chesapeake Bay and Maryland region has generally been associated more with crabs, but in recent years the area has been trying to reduce its catch of blue crabs as wild populations have been depleted. This has not, however, stemmed the demand: Maryland style crabcakes are still a well known treat in crabhouses all over the bay, though the catch now comes from points farther south.

In the Southeast, and particularly the gulf states, shrimping is an important industry. Copious amounts of shrimp are harvested each year in the Gulf of Mexico and the Atlantic Ocean to satisfy a national demand for shrimp. Locally, prawns and shrimp are often deep fried; in the Cajun and Creole kitchens of Louisiana, shrimp and prawns are a common addition to traditional recipes like jambalaya and certain stews. Crawdads are a well known and much eaten delicacy here, often boiled in huge pots and heavily spiced.

In many major cities with active fishing ports, raw oyster bars are also a feature of shellfish consumption. When served freshly shucked (opened) and iced, one may find a liquid inside the shell, called the liqueur. This is a primary feature of the raw bar, and should be sampled, if not enjoyed. Some believe that oysters have the properties of an aphrodisiac. "Rocky mountain oysters" is a euphemism for bull testicles, as their appearance and preparation is similar.

Inter-tidal herbivorous shellfish such as mussels and clams can help people reach a healthy balance of omega-3 and omega-6 fats in their diets, instead of the current Western diets (Robson 2006). For this reason the eating of shellfish is often encouraged by dietitians.

Jewish Kosher Law traditions forbid the eating of shellfish. The book of Leviticus (11:9-12) prohibits the consumption of shellfish.

Seventh-day Adventists do not eat shellfish.