Bivalves are aquatic mollusks belonging to the class Bivalvia (or Pelecypoda), a group that includes the familiar and economically important clams, oysters, scallops, and mussels. Bivalvia ("two valves") refers to the fact that most members of this group have two-part calcareous shells, or valves, that are hinged and more or less symmetrical. Pelecypoda ("hatchet-foot") refers to the common (but not always present) laterally compressed muscular foot, which when extended into sediment (sand or mud), can swell with blood and form a hatchet-shaped anchor (Towle 1989). Other names for the class include Bivalva and Lamellibranchia.

Bivalvia has about 30,000 species, making them the second most diverse class of mollusks after Gastropoda ("univalves"). There are both marine and freshwater forms. Most bivalves are relatively sedentary suspension feeders, but they have various levels of activities (some can even "swim" by jet propulsion) and not all are suspension feeders.

Many bivalves (clams, mussels, oysters, scallops, cockles) are important invertebrates for human consumption as well as key in food chains, being consumed by fish, birds, marine mammals, other vertebrates, and various invertebrates. In touching upon the human desire for beauty, both oysters and freshwater mussels are important for the production of pearls.

On the other hand, as filter feeders, bivalves may also concentrate bacteria, viruses, pesticides, industrial wastes, toxic metals, and petroleum derivatives, and through consumption become vectors of human disease (Grzimet 2003). Shipworms (Teredinidae) cause bioerosion of human-made wooded structures, such as ships and docks, and other bivalves clog water treatment plants (Grzimet 2003).

The typically laterally compressed body and two valves makes bivalves superficially similar to brachiopods (lamp shells), which make up one of the major invertebrate phyla, Brachiopoda. However, they are not closely related and differ markedly in many ways. (See differences between brachiopods and bivalves.) For instance, bivalves usually have a plane of symmetry between the shells, whereas most brachiopods have a plane of bilateral symmetry through the shells and perpendicular to the hinge. Also, bivalves use adductor muscles to hold the two shells closed and open them by means of an external or internal ligament once the adductor muscles are relaxed, whereas brachiopods use muscle power to pull the shells apart and to close them.

Freshwater pearl mussels are among the most gravely threatened fauna in the world, comprising 185 of the 195 species of bivalves placed on the 2002 IUCN Red List (Grzimet 2003). In eastern North America, 35 percent of the native species of freshwater pearl mussels are presumed extinct, and 69 percent are listed as endangered or threatened (Grzimet 2003). Among the anthropogenic causes are habitat destruction through damming, dredging, and other such activities, overfishing, and pollution, including actions reducing populations of the fish hosts. Marine bivalves have fared much better, with no known recent extinctions, and none currently listed as threatened or endangered (Grzimet 2003).

Bivalves tend to be filter-feeders. They lack a radula and feed by siphoning and filtering large organic matter from water, using their gills. The shipworm is one of the few bivalves that does not filter feed, but instead bores into drift wood (or docks, for that mater) and ingests particles produced by the drilling (Towle 1989). It is aided in digesting the wood by symbiotic bacteria that can digest cellulose. Septibranchia live in moderately deep water and create water currents by pumping, rather than ciliary action, and feed on copepod crustaceans (Russell-Hunter 1968). Some bivalves have symbiotic relationships with photosynthetic organisms, providing extra nutrition.

In the life cycle of the bivalve, the free-swimming veliger larva (characteristic of mollusks) feed on plankton before settling down. The life cycle of freshwater mussels involves specialized larvae that require attachment to gills or fins of fish (Grzimek et al. 2004). 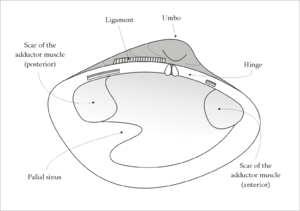 Internal anatomy of the valve.

Most adult bivalves are relatively sedentary organisms, attaching themselves to surfaces in the water by means of a byssus or organic cementation, or burying themselves in sand or other sediments, typically using the foot. For example, oysters become permanently attached to hard surface early in development. However, adult bivalves do have various levels of motile activity. Some use the muscular foot to move, either through the sediment or even by waving the foot. Tentacles may be used for movement. There are even some bivalves, such as the scallops, that can "swim" by jet-propelling themselves through the water by opening the valves and then rapidly snapping them shut.

Whereas a mollusk typically has a body divided into the three parts of head, visceral mass, and muscular foot, bivalves lack a distinct head and head structures are much reduced. Scallops lack a foot, and both oysters and giant clams lack a foot as adults.

As with all mollusks, bivalves are characterized by having a true coelom (body cavity) and organ systems for circulation, respiration, digestion, excretion, nerve conduction, and reproduction (Towle 1989). Bivalves have a reduced nervous system and an open circulatory system with heart, arteries, and veins that bathers the organs in hemolympth. There are nephridia that remove wastes.

As all parts lie within the mantle, cephalic sense organs are of no value, and thus, bivalves lack cephalic eyes and other cephalic sense organs. However, many have tentacles and/or photoreceptors, and even more sophisticated eyes with retina and lenses, located other than the head, are found in several families (Grzimek et al. 2004).

The mantle and secreted shell form a single structural entity, as in all mollusks (Russell-Hunter 1968). In all bivalves, adductor muscles, running from one valve to the other, are used to close the shell. These are the largest bivalve muscles. There is a noncalcified ligament that holds the shells together at a hinge plate. While the two valves are normally similar in shape and size, in some, such as oysters, the upper valve (or left-hand valve) is larger than the lower valve.

Bivalves normally have separate sexes, with the sperm and eggs shed into the water for external fertilization. However, some bivalve species are consecutive or simultaneous hermaphrodites. External sexual differentiation (dimorphism) is rare. 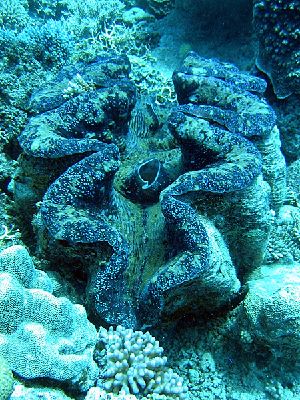 Bivalvia has an extensive fossil record, tracing to the Cambrian. Bivalves appeared late in the Cambrian explosion. By the middle Ordovician (about 460 mya), recognizable members of all modern subclasses had appeared (Grzimek et al. 2004).

While Brachiopoda was a dominant group in the Paleozoic, the bivalves came to dominate them during this era, and by the end-Permian extinction, bivalves were undergoing a huge radiation in numbers while brachiopods (along with ~95 percent of all species) were devastated.

This raises two questions: how did the bivalves come to challenge the brachiopoda niche before the mass extinction event, and how did the bivalves escape the fate of extinction? Although inevitable biases exist in the fossil record, bivalves essentially appear to be better adapted to aquatic life. Far more sophisticated than the brachiopods, bivalves use an energetically-efficient ligament-muscle system for opening valves, and thus require less food to subsist. Furthermore, their ability to burrow allows for evasion of predators: buried bivalves feed by extending a siphon to the surface. Additionally, bivalves became mobile: some developed spines for buoyancy, while others suck in and eject water to enable propulsion. This allowed bivalves to themselves become predators.

With such a wide range of adaptations, it is not surprising that the shapes of bivalve shells vary greatly: some are rounded and globular, others are flattened and plate-like, while still others, such as the razor shell Ensis, have become greatly elongated in order to aid burrowing byssonychia. The shipworms of the family Teredinidae have elongated bodies, but the shell valves are much reduced and restricted to the anterior end of the body. They function as burrowing organs, allowing the animal to dig tunnels through wood.

Currext schemes of biological classification recognize five subclasses of bivalves: Anomalosdesmata, Heterodonta, Paleoheterodonta, Protobranchia, and Pteriomorphia. The following is the division of bivalvia to the level of orders († means extinct).

Retrieved from https://www.newworldencyclopedia.org/p/index.php?title=Bivalve&oldid=794335
Categories:
Hidden category:
This page was last edited on 29 August 2008, at 13:21.
Content is available under Creative Commons Attribution/Share-Alike License; additional terms may apply. See Terms of Use for details.