Mussel is the common term for members of several families of freshwater and marine bivalve mollusks. This is not a precise grouping, as these families range through three of the five subclasses of Bivalvia: Heterodonta, Paleoheterodonta, and Pteriomorphia.

Bivalves—a class that also includes clams, oysters, and scallops—are characterized by two-part calcareous shells, or valves, that are hinged and more or less symmetrical, and a laterally compressed muscular foot, which when extended into sediment (sand or mud), can swell with blood and form a hatchet-shaped anchor (Towle 1989). Mussels are typically oblong in shape.

The freshwater mussels comprise several allied families, the largest being the Unionidae in subclass Paleoheterodonta. The freshwater Zebra mussel (genus Dreissena, native to Black and Caspian seas) and its relatives are placed in subclass Heterodonta. Freshwater mussels include large, dark-shelled mussels that burrow into the sediment, and are important in pearl production. Tiny "fingernail clams," found in clear pools and streams, and are often called mussels as well.

Most freshwater mussels require a host during one stage of the life cycle, and the adaptations to achieve this stage successfully, including mimicking insects and worms to attract a fish host, are reflective of a remarkable harmony in nature.

Most marine mussels comprise the family Mytilidae in subclass Pteriomorphia. Some freshwater mussels are also included in subclass Pteriomorphia. Marine mussels are typically pear- or wedge-shaped, often with a hairy covering on the shell. Many marine species have shells that are dark blue, blue-black, greenish brown, or yellowish-brown, and commonly attach to rocks and sides of ships.

Mussels are important ecologically, commercially and aesthetically. Ecologically, they play a key role in food chains, consuming plankton and other filter food and being consumed by fish, birds, marine mammals, other vertebrates, and various invertebrates. They also help to filter water, being natural water purifiers, and are indicators of water pollution. Commercially and aesthetically, mussels important both a food for humans and in the production of pearls, both directly via freshwater pearls and indirectly in stimulating production of pearls from oysters.

Freshwater pearl mussels are among the most gravely threatened fauna in the world, comprising 185 of the 195 species of bivalves placed on the 2002 IUCN Red List (Grzimet 2003). In eastern North America, 35 percent of the native species of freshwater pearl mussels are presumed extinct, and 69 percent are listed as endangered or threatened (Grzimet 2003). Among causes of this problem are non-point source pollution, sedimentation from erosion and clearing of streambank vegetation, fish kills that impact the reproductive cycle of parasitic mussels, and habitat loss.

Zebra mussels are invasive to North America from Europe and have eliminated some native mussels, as well as clogged pipes and tubes of industrial plants near the water.

Freshwater mussels range throughout the world with the exception of polar regions. Freshwater mussels mostly live burrowed in sand and gravel in streams and rivers, with relatively few adapted to the quiet and muddy waters of lakes, ponds, and reservoirs (FWS 2007). They require a constant source of water and are more abundant if it is non-acidic and has a substantial mineral content.

The United States is particularly abundant in species diversity of freshwater mussels. A report by the U.S. Fish & Wildlife Service (2007) claims that there are nearly three hundred species of mussels in the United States, versus only 12 species in all of Europe, although what is being specifically included in the fauna list as a mussel is not known.

Marine mussels are abundant in the low and mid-intertidal zone in temperate seas of the northern and southern hemispheres. Within their geographic range, some species prefer salt marshes or quiet bays, while others thrive in pounding surf, completely covering exposed wave-washed rocks. In addition, some species have colonized abyssal depths in the vicinity of hydrothermal vents.

The mussel's external shell is composed of two halves that protect it from predators and desiccation. Protruding from a valve is an enlarged structure called the umbo, which indicates the dorsal surface of the mussel.

Like most bivalves, mussels have a large organ referred to as a foot. In freshwater mussels, the foot is large, muscular, and generally hatchet-shaped. It is used to pull the animal through the substrate (typically sand, gravel, or silt) in which it lies partially buried. It does this by repeatedly advancing the foot through the substrate, expanding the end so it serves as an anchor, and then pulling the rest of the animal with its shell forward. It also serves as a fleshy anchor when the animal is not moving.

In marine mussels, the foot is smaller, tongue-like in shape, with a groove on the ventral surface which is continuous with the byssus pit. In this pit, a viscous secretion is poured out, which enters the groove and hardens gradually when it comes into contact with sea water. This forms an extremely tough byssus thread that secures the mussel to its substrate. 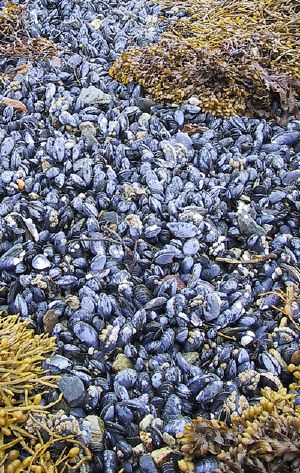 Mussels in the intertidal zone in northern Norway

Both marine and freshwater mussels are filter feeders that feed on plankton and other microscopic sea creatures. They do so by drawing water in through their incurrent siphon. The water is then brought into the branchial chamber by the actions of the cilia located on the gills for cilliary-mucus feeding. The wastewater exits out through the excurrent siphon. The labial palps finally funnel the food into the mouth where digestion can continue.

Marine mussels are usually found clumping together on the wave-washed rocks with one another, which anchors them against the force of the waves. Indeed, those mussels found in the middle of a clump will have less water loss due to water capture by the other mussels.

Both marine and freshwater mussels are gonochoristic, with separate male and female individuals.

In marine mussels, fertilization occurs outside the body, and there is a larval stage that drifts for a period of three weeks to six months before settling down on a hard surface as a young mussel. There, it is capable of moving slowly by means of attaching and detaching byssal threads to attain a better life position.

Freshwater mussels also reproduce sexually. Sperm released by the male directly into the water enters the female via the incurrent siphon. After fertilization, the eggs develop into the larval stage called glochidia. The glochidia grow in the gills of the female where they are constantly flushed with oxygen-rich water. When released into the water, these glochidia must attach to a host fish or they will perish. They attach themselves to the fish's fins or gills. They grow and then break free from the host and drop to the bottom of the water. If they land in a place that suits their needs, they will continue their development and begin their independent life.

Adaptations to attract host fish can be remarkable. To increase chances of contact, some mussels will display specially adapted tissues that look like fish prey to lure the fish close, despite lacking eyes to even see what is being mimicked (FWS 2007). The wavy-rayed lampmussel may display tissue that looks like various insects and fish, and the rainbow mussel display black projections that look like worms (FWS 2007). When the female senses a fish nearby, she will release her young into the water to affix to the fish. Freshwater mussel glochidia are often species-specific and will only live if they find the correct fish host or a limited number of possible fish species.

Reproduction in the Dreissenidae (zebra mussels and their relatives) is similar to that of the marine mussels, and does not require a fish host. They can reproduce at a tremendous rate, and it is not unusual for zebra mussels to completely cover native mussels, starving the native mussels for lack of food and oxygen.

Bouchots are vertical pilings planted at sea for growing mussels. Here, bouchots are demonstrated at an agriculture salon.

Freshwater mussels are used as host animals for the cultivation of freshwater pearls. Some species of marine mussel, including the Blue Mussel (Mytilus edulis) and the New Zealand green-lipped mussel (Perna canaliculus), are also cultivated as a source of food.

There are a variety of techniques for growing mussels.

Pearl farmers began culturing freshwater pearls in 1914 using the pearl mussels native to Lake Biwa in Japan. Since the time of peak production in 1971, when Biwa pearl farmers produced six tons of cultured pearls, pollution and overharvesting have caused the virtual extinction of this animal. Japanese pearl farmers now culture a hybrid pearl mussel—a cross between the last remaining Biwa Pearl Mussels and a closely related species from China—in other Japanese lakes such as lake Kasumi Ga Ura. In the 1990s, Japanese pearl producers also invested in producing cultured pearls with freshwater mussels in the region of Shanghai, China, and in Fiji. Freshwater pearls are characterized by the reflection of rainbow colors in the luster.

Marine mussels are a popular seafood item, especially in Belgium and the Netherlands, where they are consumed with french fries (moules frites). In Italy, they are a popular dish, often mixed with other seafood, or eaten with pasta. In Turkey, mussels are either covered with flour and fried on shishs (midye tava) or filled with rice and served cold (midye dolma).

Cooked mussels can be orange, or of a pale yellow 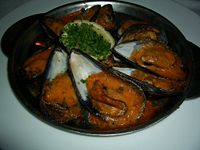 Mussels can be smoked, boiled or steamed. As for all shellfish, mussels should be alive just before they are cooked because they quickly become toxic after they die. A simple criterion is that live mussels, when in the air, are tightly shut; open mussels are dead and should be discarded. Also closed mussel shells that are unusually heavy should be discarded as well. They usually contain only mud and can be tested by slightly moving the two shells away from each other. The mussel shells open by themselves when cooked.

Mussel poisoning due to toxic planktonic organisms is a potential danger along some coastlines. For instance, mussels should be avoided along the west coast of the United States during the warmer months. This is usually caused by dinoflagellates creating elevated levels of toxins in the water that do not harm the mussels, but if consumed by humans can bring on illness. Usually the United States government monitors the levels of toxins throughout the year at fishing sites.

Freshwater mussels are generally unpalatable, though the native peoples in North America utilized them extensively.