The muskrat or musquash (Ondatra zibethicus), the only species in genus Ondatra, is a medium-sized semi-aquatic rodent native to North America, and introduced in parts of Europe, Asia, and South America. The muskrat is found in wetlands and is a very successful animal over a wide range of climates and environments.

The muskrat plays an important role in nature and is a resource of food and fur for humans, as well as sometimes being a pest.

Muskrats may be considered rats in the general sense, in that they are medium-sized rodents with an adaptable lifestyle and an omnivorous diet. They are not, however, so-called "true rats," that are members of the genus Rattus. Muskrats are members of the Muroidea superfamily, along with many other rodents, including most mice and rats, and are part of the Cricetidae family, which includes hamsters, lemmings, pack rats, and many others.

The muskrat is one of the larger "rats." It is about 40 to 60 centimeters (16 to 24 inches) long, almost half of that tail, and weighs from 700 to 1800 grams (1.5 to 4 pounds). It is about four times the size of the best-known rat, the brown rat (Rattus norvegicus), which are found in large numbers as pests in North America and Europe and are also common as pets and laboratory animals. Muskrats are much smaller than beavers (Castor canadensis), with whom they often share their habitat. Adult beavers weigh from 14,000 to 40,000 grams (30 to 88 pounds) (Nowak 1983).

Muskrats are covered with short, thick fur, which is medium to dark brown in color, with the belly a bit lighter. The fur has two layers, which helps protect them from the cold water. They have long tails that are covered with scales rather than hair and are flattened vertically to aid them in swimming. When they walk on land, the tail drags on the ground, which makes their tracks easy to recognize. The muskrat's name comes from the two scent glands, which are found near its tail. They give off a strong "musky" odor, which the muskrat uses to mark its territory (Caras 1967; Nowak 1983).

Muskrats, like most rodents, are prolific breeders. Females can have 2 to 3 litters a year of 6 to 8 young each. The babies are born small and hairless and weigh only about 22 grams (0.8 ounces). In southern environments, young muskrats mature in 6 months, while in colder northern environments it takes about a year. Muskrat populations, like those of some other rodents, appear to go through a regular pattern of rise and dramatic decline spread over a six- to ten-year period (MU 2007). 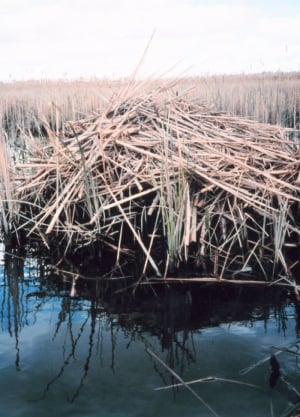 Muskrats are found over most of Canada and the United States and a small part of northern Mexico. They always inhabit wetlands, areas in or near salt and fresh-water marshlands, rivers, lakes, or ponds. They are not found in the state of Florida where Neofiber alleni, the round-tailed muskrat or Florida water rat, fills their niche (Caras 1967).

Muskrats spend much of their time in the water and are well suited for their semi-aquatic life, both in and out of water. Muskrats can swim under water for up to 15 minutes. Their bodies, like those of seals and whales, are less sensitive to the build up of carbon dioxide than those of most other mammals. They can close off their ears to keep the water out. Their hind feet are semi-webbed, although in swimming the tail is their main means of propulsion (Voelker 1986).

Muskrats normally live in family groups consisting of a male and female pair and their young. Muskrat families build nests to protect themselves and the young from cold and predators. Extensive burrow systems are dug in the ground adjacent to the water with an underwater entrance. In marshes, lodges are constructed from vegetation and mud. In snowy areas they keep the openings to their lodges open by plugging them with vegetation, which they replace every day. Most muskrat lodges are swept away in spring floods and have to be replaced each year. Muskrats also build feeding platforms in wetlands. It is common to find muskrats living in beaver lodges, as well. Muskrats help maintain open areas in marshes, which helps to provide habitat for aquatic birds (Nowak 1983, Attenborourgh 2002; MU 2007).

During the spring, muskrats often fight with other muskrats over territory and potential mates. Many are injured or killed in these fights.

Muskrats are most active at night or near dawn and dusk. They feed on cattails and other aquatic vegetation. They do not store food for the winter, but sometimes eat the insides of their lodges or steal food that beavers have stored. Plant materials make up about 95 percent of their diets, but they also eat small animals such as freshwater mussels, frogs, crayfish, fish, and small turtles (Caras 1967; Nowak 1983).

Muskrats provide an important food resource for many other animals, including mink, foxes, coyotes, wolves, lynx, bears, eagles, snakes, alligators, and large owls and hawks. Otters, snapping turtles, and large fish such as pike prey on baby muskrats. During the winter, caribou and elk sometimes feed on the vegetation that makes up muskrat lodges when other food is scarce (MU 2007). 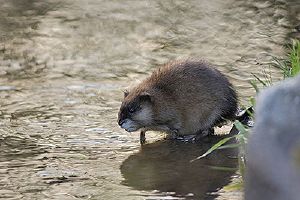 Muskrats have sometimes been a food resource for humans. Muskrat meat is said to taste like rabbit or duck. In the Roman Catholic Archdiocese of Detroit, there is a longstanding dispensation allowing Catholics to consume muskrat on Ash Wednesday and the Fridays of Lent when the eating of meat, except for fish, is prohibited. Because the muskrat lives in water it is considered a fish in this case (Lukowski 2007), as is the capybara, another rodent.

Native American Indians have long considered the muskrat to be a very important animal. In several Native American creation myths, it is the muskrat who dives to the bottom of the primordial sea to bring up the mud from which the earth is created, after other animals had failed in the task. The name musquash comes from the Cree language, while French speaking Canadians call the muskrat rat musqué (Musgrave 2007; MU 2007).

Muskrat fur is very warm and of good quality, and the trapping of muskrats for their fur became an important industry in early twentieth-century United States. At that time, muskrats were introduced to Europe as a fur resource. They spread throughout northern Europe and Asia. Some European countries, such as Belgium and the Netherlands, consider the muskrat to be a pest that should be exterminated. Therefore the animal is trapped and hunted to keep the population down. The muskrat is considered a pest because its burrowing causes damage to the dikes and levees that these low-lying countries depend on for protection from flooding. Muskrats also sometimes eat corn and other farm and garden crops (Nowak 1983).

Muskrats continue to thrive in most of their native habitat and in areas where they have been introduced. (They were also introduced to southern South America.) While much wetland habitat has been eliminated due to human activity, new muskrat habitat has been created by the construction of canals or irrigation channels and the muskrat remains common and wide-spread. They are able to live alongside streams that contain the sulfurous water that drains away from coal mines. Fish and frogs perish in such streams, yet muskrats may thrive and occupy the wetlands. Muskrats also benefit from human reduction of some of their predators (Nowak 1983).

Retrieved from https://www.newworldencyclopedia.org/p/index.php?title=Muskrat&oldid=681746
Categories:
Hidden category:
This page was last edited on 2 April 2008, at 12:49.
Content is available under Creative Commons Attribution/Share-Alike License; additional terms may apply. See Terms of Use for details.