The true alligators are now restricted to two species—Alligator mississippiensis in the southern United States and the small Alligator sinensis in the Yangtze River, People's Republic of China.

For all animals, having offspring requires an expenditure of energy. Although alligators are cold-blooded reptiles, the females exhibit parental behavior, which involves a high level of sacrifice. The females provide parental care by building a nest, laying eggs, covering the nest with vegetation, guarding the nest throughout the two-month incubation period, opening the buried nest to assist in hatching, transporting hatchlings to water, and protecting the young (Grzimek et al. 2004). The young alligators remain near their mother for at least two to three months, but often as long as two to three years (Grzimek et al. 2004).

The name alligator is an anglicized form of the Spanish el lagarto ("the lizard"), the name by which early Spanish explorers and settlers in Florida called the alligator.

Alligators (family Alligatoridae, genus Alligator) differ from crocodiles (family Crocodylidae) principally in having wider and shorter heads, with more obtuse snouts; and in having the fourth, enlarged tooth of the under jaw received, not into an external notch, but into a pit formed for it within the upper one. While in alligators only the upper teeth can be seen with the jaws closed, in true crocodiles the upper and lower teeth can be seen—though many individuals bear jaw deformities, which complicate this means of identification. In addition, alligators lack a jagged fringe, which appears on the hind legs and feet of the crocodile; the toes of the hind feet are webbed not more than half way to the tips; and alligators have a lower tolerance to salinity, strongly preferring fresh water, while crocodiles can tolerate salt water due to specialized glands for filtering out salt.

With regards to appearance, one generally reliable rule is that alligators have U-shaped heads, while crocodiles are V-shaped. This can be remembered by noting that "A" in alligator comes before "C" in crocodile, and "U" comes before "V." 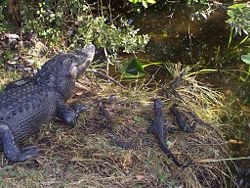 Both living species of alligators (Alligator mississippiensis and Alligator sinensis) also tend to be darker in color, often nearly black but color is very dependent on the water. Algae-laden waters produce greener alligators; alligators from waters with a lot of tannic acid from overhanging trees are often darker (although the Chinese alligator has some light patterning.)

In general, crocodiles tend to be more dangerous to humans than alligators.

The eyes of a large alligator will glow red and those of a smaller one will glow green when a light is shined on them. This fact can be used to find alligators in the dark.

In Central and South America, the Alligatoridae family is represented by five species of the genus Caiman, which differs from the alligator by the absence of a bony septum between the nostrils, and the ventral armor is composed of overlapping bony scutes, each of which is formed of two parts united by a suture. Some authorities further divide this genus into three, splitting off the smooth-fronted caimans into a genus Paleosuchus and the black caiman into Melanosuchus.

An average American alligator's weight and length is 800 pounds and a little over four meters (13 feet) long. According to the Everglades National Park website, the largest alligator ever recorded in Florida was 17 feet, five inches long (5.3 meters). The largest alligator ever recorded measured 19 feet, two inches (5.8 meters) and was found on Marsh Island, Louisiana. Few of the giant specimens were weighed, but the larger ones could have exceeded a ton in weight. The Chinese alligator is smaller, averaging about 1.5 meters (five feet) in length, and rarely exceeding two meters (seven feet).

An alligator's lifespan is usually estimated in the range of 50 years or more. A specimen named Muja has resided in the Belgrade Zoo in Serbia since 1937, making it at least 70 years old. And in Riga Zoo, Latvia an alligator has been living since 1935. 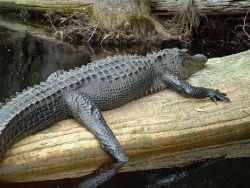 There are only two countries on Earth that have alligators—the United States and China.

The American alligators normally live along the coast of the Gulf of Mexico, Texas, Oklahoma, Louisiana, Mississippi, Alabama, and Florida as well as Arkansas, Georgia and the Carolinas. However in the last few years, the alligators range appears to be increasing northward. Alligators have been seen as far north as Memphis, Tennessee, presumably arriving there by swimming up the Mississippi River.

The Chinese alligator is endangered and lives only in the Yangtze River valley, though currently Rockefeller Wildlife refuge in southern Louisiana has several in captivity in an attempt to preserve the species. There are estimated to be only a couple of dozen left in the wild. There are many more of these alligators in zoos around the world than in the wild.

Large male alligators are solitary, territorial animals. Smaller alligators often can be found in large numbers in close proximity to each other. The largest of the species (both males and females), will defend prime territory; smaller alligators have a higher tolerance of other alligators within a similar size class.

Although alligators have heavy bodies and slow metabolisms, they are capable of short bursts of speed that can exceed 30 miles per hour, though this could more properly be classified as a short fast lunge rather than a dash (NPS 1997).

Alligators' main prey are smaller animals that they can kill and eat with a single bite. Alligators may kill larger prey by grabbing it and dragging it in the water to drown. Alligators consume food that cannot be eaten in one bite by allowing it to rot or by biting and then spinning or convulsing wildly until bite-size pieces are torn off. This is referred to as the "death roll." The stomachs of alligators often contain gastroliths, rocks that are held in the digestive tract to help with grinding the food.

Most of the muscle in an alligator's jaw is intended for biting and gripping prey. The muscles that close the jaws are so strong they have the same downward force of a truck falling off a cliff (Lloyd and Mitchinson 2006). However the muscles for opening their jaws are relatively weak. As a result, an adult man can hold an alligator's jaw shut with his bare hands. In general, a simple rubber band is enough to prevent an adult alligator from opening its jaws.

Alligators are opportunistic feeders, eating almost anything they can catch. When they are young they eat fish, insects, snails, and crustaceans. As they grow, they take progressively larger prey items, including larger fish such as gar, turtles, various mammals, birds, and other reptiles. They will even consume carrion if they are sufficiently hungry.

Adult alligators can take razorbacks and deer and are well known to kill and eat smaller alligators. In some cases, larger alligators have been known to hunt the Florida panther and bears, making it the apex predator throughout its distribution. As humans encroach onto their habitat, attacks on humans are few but not unknown. Alligators, unlike the large crocodiles, do not immediately regard a human upon encounter as prey.

Alligators are generally wary of humans and tend to walk or swim away if one approaches. Unfortunately, overconfidence has led some people to enter the animals' habitat in ways that provoke aggression. Feeding alligators has led to some of the alligators losing their fear of humans and in turn, choosing to approach humans instead of moving away.

Human deaths caused by alligators have increased. While there were only nine fatal attacks in the United States between 1970 and 2000, eleven people were killed by alligators in the five years between 2001 and 2006 alone. 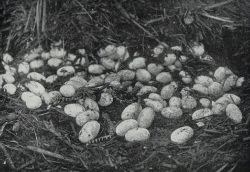 The maturity of the alligator is dependent more upon the size of the animal than its age. An American alligator is generally considered mature when it reaches a length of six feet or more.

Alligators are seasonal breeders. The mating season is in spring when the water warms. The female builds a nest of vegetation that rots, incubating the eggs.

The mother will defend the nest from predators and will assist the babies to water once they hatch. She will provide protection to the young for about a year if they remain in the area. The largest threat to young alligators are adults, accounting for nearly a fifty percent mortality rate in some cases. In the past there have been population explosions of alligators in the years following the outlawing of alligator hunting, as the young gators have a greater chance of surviving to adulthood once much of the previous adult generation had been killed off.

Alligator farming is a big and growing industry in Florida, Texas, and Louisiana. These states produce a combined annual total of some 45,000 alligator hides. Alligator hides bring good prices and hides in the six to seven foot range have sold for $300 each, though the price can fluctuate considerably from year to year. The market for alligator meat is growing and approximately 300,000 pounds of meat is produced annually. According to the Florida Department of Agriculture, raw alligator meat contains roughly 200 calories per three ounce serving size, of which 27 calories come from fat (Collins 2007).