Beavers are large, semi-aquatic rodents native to North America and Europe. They are the only living members of the family Castoridae, which contains a single genus, Castor, and two species.

Beavers are best known for their construction behavior, especially the building of dams. This behavior, while important in order to provide a suitable habitat for the beaver's own survival, development, and multiplication, also provides numerous values for the larger ecosystem. As beavers modify the landscape, they create wetland habitats for other species, help in the control of flooding and erosion, aid water cleansing, and produce a more fertile land through silt retention. Beavers historically have provided direct economic benefit to humans through fur and have added to human enjoyment of nature, both directly and by increasing biodiversity. Unfortunately, the human role has not always been so kind to beavers, nearly driving the European beaver to extinction and at one point endangering the American beaver.

The mountain beaver (Aplodontia rufa), which is found in the coastal forests of western North America, is a common name for a rodent that is unrelated to beavers and is placed in the family Aplodontiidae. 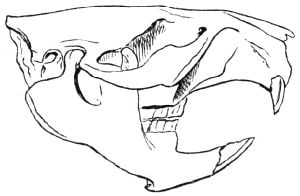 The two beaver species, Castor canadensis (American beaver) and Castor fiber (European beaver) are very similar, being chiefly distinguished by the form of the nasal bones of the skull. They are the world's second-largest rodents, after the capybara of South America (Hydrochoerus hydrochaeris). Adult beavers weight from 14 kg (30 lbs) to as much as 40 kg (88 lbs) (Nowak 1983). Like all rodents, beavers have two large incisors on both the upper and lower jaws. These grow constantly and must be sharpened and kept from growing too long by frequent gnawing. (The word "rodent" comes from the Latin word rodere, meaning "to gnaw.") The incisors of beavers are bright orange.

Beavers make their homes in or near bodies of freshwater, such as lakes, streams, and ponds, and spend much of their time in the water. They are protected from the water and the cold by their thick fur. Beaver fur consists of two kinds of hair—the one close-set, silky and of a grayish color, the other much coarser and longer, and of a reddish brown.

Beavers have webbed hind-feet, which they use in swimming. They can stay submerged up to 15 minutes and can swim underwater at speeds up to 135 meters per minute (5 miles per hour). Their eyes are protected underwater by special transparent eyelids and their noses and ears can be shut (Voelker 1986).

The beaver's tail is large and flat and is used for balance and propulsion in the water, for support when the beaver stands on its hind feet, and to make a warning sound when it is slapped on the water's surface.

Beavers eat mainly plant foods, although they sometimes also eat insects (IUCN 2007). In summer they seem to prefer soft water plants and berries and sometimes eat algae. They also eat the bark and soft wood of trees. Tree branches are stored underwater to be eaten during the winter when other plant foods are not available (Buyukmichi 1967).

Beavers live in family groups, usually consisting of one male and female pair and their offspring. The young, which are born in late spring, are born fully furred and can swim within 24 hours of their birth. They live with their parents for about two years, during which they learn and help with the family's building and food storage activities. After two years they are driven off by their parents and have to set up new homes (Nowak 1983; Voelker 1986).

In order to render stream water of sufficient depth for their habitat, beavers build dams of mud and of the stems and boughs of trees felled by their powerful incisor teeth. In the pond created by the dam they make their "lodges," which are roomy chambers, with the entrance beneath the water. Beavers sometimes make their dens by burrowing into the banks of streams or lakes rather than building a lodge.

Beaver dams are created both as a protection against predators, such as coyotes, wolves, and bears, and to provide easy access to food during winter. Destroying a beaver dam without removing the beavers takes a lot of effort, especially if the dam is downstream of an active lodge. Beavers can rebuild such primary dams overnight, though they may not defend secondary dams as vigorously.

Beavers have been known to build very large dams. The largest known was discovered near Three Forks, Montana, and was 2,140 feet (650 meters) long, 14 feet (4 meters) high, and 23 feet (7 meters) thick at the base.

The ponds created by well-maintained dams help isolate the beavers' home (their lodge), which is also created from severed branches and mud. The lodge has underwater entrances to make entry nearly impossible for predators. A very small amount of the lodge is actually used as a living area. Beavers dig out their den with an underwater entrance after they finish building the dam and lodge structure. There are typically two dens within the lodge, one for drying off after exiting the water, and another, drier one where the family actually lives. The beaver works as a keystone species in an ecosystem by creating wetlands that are utilized by many other species. Next to humans, no other extant animal does more to shape its landscape. Such wetland benefits include flood control downstream, biodiversity (by providing habitat for many rare as well as common species), and water cleansing, both by the breakdown of toxins such as pesticides and the retention of silt by beaver dams. Over the eons, this collection of silt produces the rich bottom land so sought after by farmers. Beaver dams also reduce erosion as well as decrease the turbidity that is a limiting factor for much aquatic life.

A beaver dam has a certain amount of freeboard above the water level. When heavy rains occur, the pond fills up and the dam gradually releases the extra stored water. Often this is all that is necessary to reduce the height of the flood wave moving down the river, and will reduce or eliminate damage to human structures. Flood control is achieved in other ways as well. The surface of any stream intersects the surrounding water table. By raising the stream level, the gradient of the surface of the water table above the beaver dam is reduced, and water near the beaver dam flows more slowly into the stream. This helps in reducing flood waves, and increases water flow when there is no rain. Beaver dams also smooth out water flow by increasing the area wetted by the stream. This allows more water to seep into the ground where its flow is slowed. This water eventually finds its way back to the stream. Rivers with beaver dams in their head waters have lower high-water and higher low-water levels.

If a beaver pond becomes too shallow due to the settling of sediment, or if the tree supply is depleted, beavers will abandon the site. Eventually the dam will be breached and the water will drain out. The rich thick layer of silt, branches, and dead leaves behind the old dam is the ideal habitat for wetland species. Many of them will have been on the fringes of the pond. 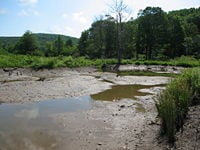 As the wetland fills and dries out, pasture species colonize it and it becomes a meadow suitable for grazing. In an area with nothing but forest down to the stream edge, this provides a valuable niche for many animals that otherwise would be excluded. Finally the meadow will be colonized by riverine trees, typically aspens, willows, and such species that are favored by the beaver. Beavers are then likely to re-colonize the area, and the cycle begins again. Each time this process repeats itself another layer of rich organic soil is added to the bottom of the valley. The valley slowly fills and the flat area at the bottom gets wider.

The beaver's modification of the environment benefits many other species of animals. Canadian naturalist Bruce Wright said that the beaver is "a key to wildlife abundance" and that, "summer moose range and woodcock breeding range in eastern Canada seem to be a function of beaver abundance" (Caras 1967).

The ponds created by beavers can also help reduce water pollution by helping remove nutrients, pesticides, and herbicides from the water.

Beavers have long been hunted and trapped by humans, mainly for their fur, but also for their scent glands, which are used to make perfume. Beaver meat is also sometimes eaten. The European beaver was hunted almost to extinction by the early twentieth century, but is now making a comeback and is being reintroduced to parts of its former range (IUCN 2007).

Beaver pelts were used for barter by Native Americans in order to gain European goods. The pelts were then shipped back to Great Britain and France where they were made into clothing items, especially hats. Widespread hunting and trapping of beavers led to their endangerment. Eventually, the fur trade fell apart due to declining demand in Europe and the takeover of trapping grounds to support the growing agriculture sector. The rise and fall of the fur trade played an important role in the European exploration and conquest of North America.

In North America, beavers are once again common and are in the process of returning to much of their old range.

Despite the great environmental benefits of their activities, beavers can also cause problems for humans, especially by destroying trees and flooding roads and railroads. The American beaver was introduced to southern Argentina as a fur resource and is now considered a pest there. It has also been introduced to northern Europe where it competes with the endangered European beaver (ISSG 2007).

Generally, beavers are admired for their hard work and for their peaceful and social nature. The American beaver is the national animal of Canada; it is depicted on the Canadian five-cent piece and was on the first Canadian postage stamp, the Three-Penny Beaver. As a national symbol, the animal is a favorite choice for depicting Canadians as furry characters and was chosen to be the mascot of 1976 Summer Olympics held in Montreal with the name "Amik" ("beaver" in Algonquin). It is also the symbol of many units and organizations within the Canadian Forces, such as on the cap badges of the Royal 22e Régiment and the Canadian Military Engineers.

In the United States, Oregon is known as the "The Beaver State." The beaver is the state mammal of New York (after the historical emblem of New Netherland). It also appears on New York City's coat of arms, seal, and flag because of the importance of the fur trade in initial settlement of the region. 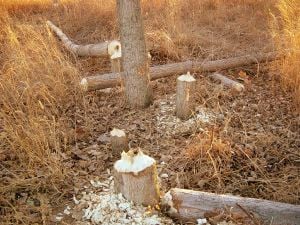 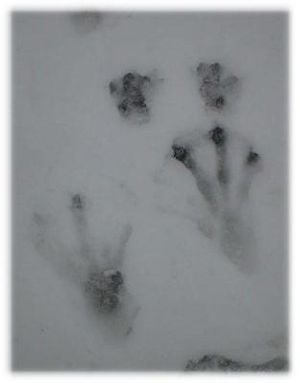